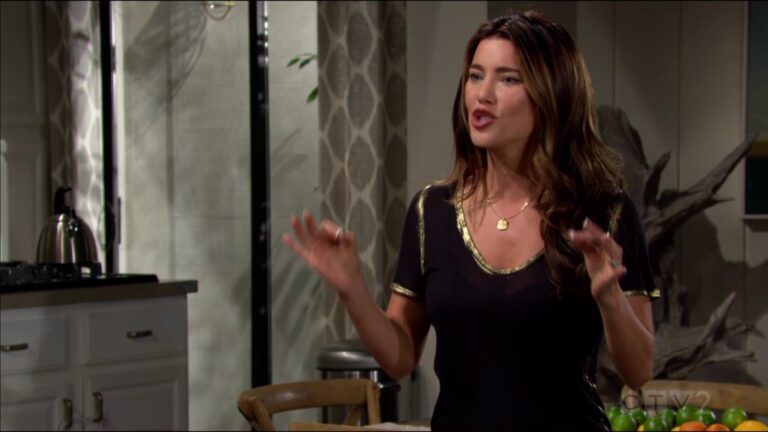 In the Tuesday, August 9, 2022, full episode recap of CBS’ Bold and the Beautiful, Hope and Liam have questions about Li, Ridge avoids discussing kissing Taylor, and Brooke remains convinced her husband is committed to her.

We also have Monday’s B&B recap where Steffy confronted Li about keeping Finn’s survival a secret and Taylor was optimistic about her future with Ridge.

At Forrester Creations, Taylor and Ridge talk about how great it is for Steffy to be reunited with Finn. She wonders if things could get even better and reminds him of their kiss.

They rehash Steffy and Finn’s reunion and all the love they radiate. She says the kids will always be the best part of them.

“At times like these, it seems that anything is possible,” he says. She daintily wanders off to see her daughter.

At Steffy’s, she lays into Li for cruelly keeping Finn’s survival a secret. Li says that real cruelty is dealing with thoughtless doctors and psychos like Sheila.

She may be sorry for Steffy’s pain, but she won’t apologize for doing what she had to to save her son.

Steffy doesn’t want an apology, just an explanation. Her recovery would have been easier knowing he wasn’t dead. She didn’t even know she would make it through her grief.

Li reminds her of all the chaos and drama she brought into Finn’s life. Steffy blames Sheila for that.

Li realizes she could have done things differently but was too focused on her son to see it. All they should be concerned about is his survival.

Taylor guesses what they’ve been discussing. Steffy is having a hard time not screaming about all this. She doesn’t know how to forgive Li.

The doctor prods her to tell her everything Li said. Steffy recaps. Her mom has some questions for Li herself but thinks they should focus on her saving Finn’s life.

“My worst nightmare is now my greatest joy,” Steffy says. Her future couldn’t be brighter.

After getting some ice tea, Steffy asks her mom what’s up with her. She nags her mom to open up. Taylor admits she has something on her mind.

She explains that she and Ridge got swept up in a moment and kissed. “It was a really good kiss,” she adds.

Steffy is happy for her and asks what it means.

At Brooke’s, she assures Hope that she is feeling the love from Ridge and no one will keep them apart.

Hope hopes that’s true but reminds her he hasn’t made a re-commitment.

Brooke is sure that is coming soon. They have a marriage but haven’t been able to focus on each other yet. She repeats nothing will change his commitment to her.

Hope remains doubtful. Liam urges her to leave it.

Hope brings up Li hiding the truth about Finn for so long.

They are excited to see Steffy and Finn again. Liam suggests they throw a party.

Ridge walks in and says he’s here for that. This is an amazing time for his family.

He thanks Liam for being so kind to Steffy through all of this. He’s even grateful to Bill, not that he’s told him that.

Hope says the reunion must have been quite a moment. Liam wonders why Li stayed quiet as long as she did. Hope imagines it will create a strain with Steffy.

Once the kids depart, Brooke asks Ridge how he’s feeling. He’ll always worry but it feels like a weight has been lifted. She suggests they celebrate his return. They kiss.

Brooke realizes something is going on.

When Liam and Hope return to their cabin, he tries to figure out what’s going on. His wife silences him with a kiss and starts taking off his clothes.