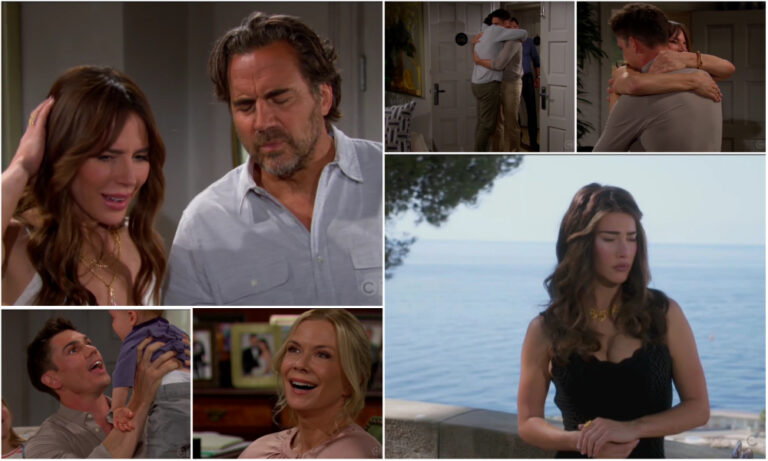 In the Friday, July 29, 2022, full episode recap of CBS’ Bold and the Beautiful, Finn finally makes it to Monaco where he reunites with Taylor, Ridge, Kelly and Hayes, before he finally sees his love.

We also have Thursday’s B&B recap where Finn and Dollar Bill went to Monte Carlo, and Sheila escaped once again.

At Forrester Creations, Hope and Liam make it their business to tell Eric, Thomas and Brooke that Finn’s alive.

They relay the crazy story and everyone’s astounded but happy.

Eric’s so happy. Liam says, “Finn is so special to my daughter.”

Thomas can’t imagine her reaction when she sees him for the first time. Everyone nods and smiles.

They dine on pizza and talk about the epic reunion that is about to happen.

On the flight, Finn recounts how horrible it was to try to get back to Hayes and Kelly and Steffy while Sheila kept him.

Finn once again calls Steffy and leaves a message about how much he loves and misses her and can’t wait to see her.

Flavia meets with Taylor and Ridge in Monaco.

They hoped to see Steffy, but the therapist says she’s receiving the best care. Still, they want to see her. Flavia admits she doesn’t know where their daughter is.

She asks them not to be alarmed. She’s struggling but making progress.

Taylor purses her lips and Ridge gets a little miffed.

Back in Monaco, Steffy is outside, looking over the water.

Back at Steffy’s place, Ridge is annoyed when Dollar Bill calls. Taylor says to answer it.

Bill tells them he’s on his way to Monaco with Finn.

“What are you saying?” Ridge asks.

Bill gives Finn the phone and he tells them himself.

He lets them know his mama nursed him back to health. He’ll explain it later but is desperate to find Steffy.

They can’t believe they’re talking to him but admit they’re trying to get a hold of her. Finn says they’re landing soon. Ridge will text where they’re staying. He’ll get the kids there, too.

Back outside, Steffy meanders as she looks at the yachts. She says, “Why Finn? Why?”

Taylor and Finn embrace, and everyone’s emotional. Ridge stops Bill before he goes. “I’m in your debt.”

Bill says no, he’s not. He’s just grateful. Finn wants to see Steffy and the kids but Taylor admits they’re not sure where she is.

The kids are around.

A knock comes to the door. The kids are trotted in and there are hugs all around as Finn reunites with his kids. The baby goes to bed and Kelly says she missed Finn “this much,” as she widens her arms. She asks where Mommy is. Finn assures he’s going to go get her but Kelly worries. Taylor promises they’ll be back. Kelly jumps on Finn, happy to see him.

Finn takes off to search for her and Taylor hands over her cell phone.

He says he’ll go check out her favorite spots. He can’t just sit there and wait. He runs off. Kelly and Ridge draw photos after he’s gone.

Kelly draws a photo of a mommy and daddy with two kids.

Back outside, Steffy looks at the bracelet with the locket that holds photos of her, Finn and the kids.

Finn wanders about and finds Steffy.

He says, “Steffy,” and she turns around.