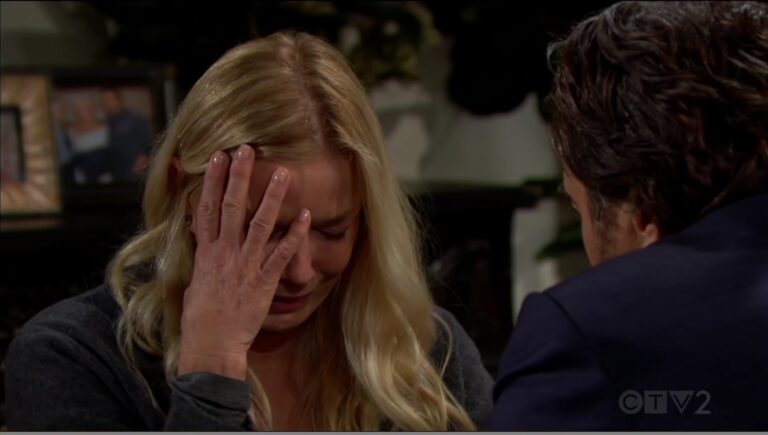 In the Thursday, January 6, 2022, full episode recap of CBS’ Bold and the Beautiful, Brooke tells Ridge she relapsed, Hope hints to Steffy that something went wrong on New Year’s, and Taylor warns Sheila to be cautious. We also have Wednesday’s B&B recap where Brooke tried to confess to Ridge while Sheila vented to Taylor.

Hope arrives at Forrester Creations as Finn is kissing Steffy. The three of them chat about the holiday. Hope says her family had an early evening. Steffy already knows Ridge didn’t make it back to see Brooke. Finn senses Hope is stressed and Steffy wonders if something happened on New Year’s they’re not aware of.

Hope admits she feels like something has been off with her mom but won’t explain more. She leaves, recalling Brooke banishing Deacon from her life. Meanwhile, Steffy and Finn are surprised that Deacon was invited to Brooke’s party and didn’t make any problems. She’s just glad that Sheila didn’t show up to their festivities.

At Brooke’s, she admits to Ridge that something happened on New Year’s Eve. Flashing back to drinking and kissing with Deacon, she tells her husband that he is going to be upset when she tells him what she did.

Sitting down, she explains she was in control for years and he was so supportive… but she relapsed and drank. She was excited to ring in the new year with him and, although she accepted he couldn’t be there, something switched inside of her when she was drinking non-alcoholic champagne. Once she was alone, she felt an overwhelming urge to drink real alcohol. She started drinking and couldn’t stop. As she breaks into tears, he holds her and says it’s okay. They will deal with this and it will be alright.

Ridge asks if Deacon did something. Hope bursts in before she can answer. She’s realized something is wrong. Brooke tells her that she relapsed. Ridge repeats his questions about Deacon but Brooke insists this is all on her. Her daughter and husband offer her all the support they can. She’s sorry but they repeat she has nothing to feel sorry for. Everyone makes mistakes. “You have no idea,” Brooke says. Hope is sorry she left her alone on New Year’s.

Sheila sits in Taylor’s office remembering how she slipped alcoholic champagne into Brooke’s order for non-alcoholic. Once Taylor gets off the phone, she asks Sheila where she just was mentally. Sheila claims she was thinking about what good will come in the new year. She adds that she’s very concerned about working on herself so she will be good for her son in his new life.

Taylor wants to see her make improvements but warns she has a long way to go. Sheila claims she is dedicated to transforming herself into a kinder and more stable person so they can heal old wounds. Taylor is glad to hear that but is extremely cautious.

It is too soon for her to spend more time with Finn and Hayes. Steffy and her husband have set clear boundaries and she needs to respect their wishes. She can’t go anywhere unless she’s invited.

Sheila understands why there are constraints. The doctor reminds her that her life is filled with troubling instability. She saw that firsthand when Sheila shot her. She has a tremendous amount of work to do to become the person she wants to be. Sheila thanks her for having faith that she can accomplish that and admires her for her compassion, something that Brooke has never had.

Taylor senses she still has a lot of anger at Brooke and doesn’t want her to cause any trouble. “Promise me that you will not lash out at Brooke,” she begs. Sheila lets out a little laugh and promises.

Taylor drops by Steffy’s office at Forrester Creations. She tells her how happy she is that she is working with her father and Eric. Taylor has so many good memories of the place. Steffy explains that she got a weird vibe when Hope was there earlier. She sensed that something is wrong with Brooke.

Sheila returns to her room and vows that she will be a changed woman, as long as no one discovers what she did to Brooke.