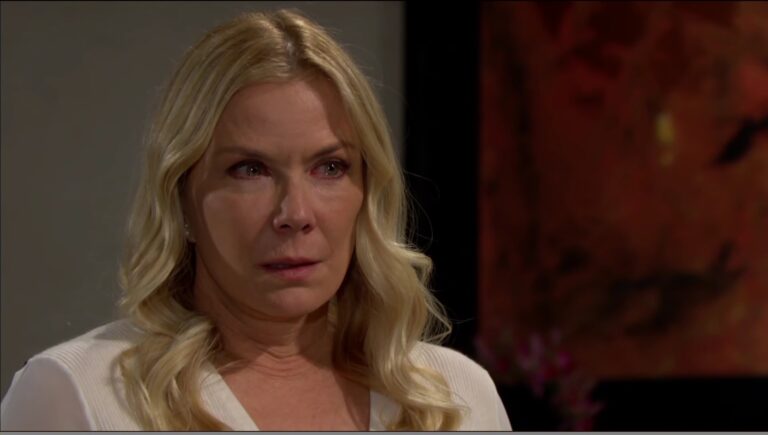 In the Friday, January 21, 2022, full episode recap of CBS’ Bold and the Beautiful, Hope confronts Brooke about kissing Deacon, Steffy grills Ridge about Brooke, and Paris and Carter talk about what’s happening between them. We also have Thursday’s B&B recap where Brooke cried as Hope confronted her about kissing ‘Santa’.

At Brooke’s house, Hope asks her what Douglas means when he claims he saw her kissing Santa on New Year’s Eve. “There’s something I need to tell you,” Brooke admits. After everyone left that night, Deacon returned. Hope assumes her dad got her to drink but Brooke insists otherwise. She got Deacon to join her in drinking after he tried to stop her.

Hope asks if she is still drinking. Brooke hasn’t been. She’s only been a little tempted and doesn’t know where that temptation came from that night. After Hope reminds her of how much support she has, she asks what more is going on. The topic goes back to the Santa kissing. “You were kissing my father,” Hope guesses.

Brooke stares. After she methodically sits down, she recalls how disappointed she was that Ridge wasn’t coming back for the holiday. She grabbed vodka and got Deacon to join her, convincing them both that it would be harmless. They got tipsy and giggly and she put a Santa hat on him. As they reminisced about the good times, a closeness developed and they kissed. Hope is relieved that at least Douglas doesn’t understand what happened. She thanks her mom for telling her and asks her to be forgiving.

“That’s not all sweetheart,” Brooke says. She explains that Deacon spent the night. Nothing happened between them. But if Ridge had found them together, it would have been a disaster. How could she risk losing her marriage like that? She’s sure Taylor and Steffy are just waiting to pull Ridge back into their family. She would lose him forever if he knew what happened.

At the Forrester Creations office, Steffy teases Ridge about the photo of him in an interview. He accuses her of thinking he looks like Bill. As they laugh about it, Taylor comes in and tells them she will remember to stop by when she needs to smile. Nothing makes her happier than to see them working together.

They tell her how happy they are that she’s back in LA. Thomas joins them and Ridge congratulates him on his new designs. Taylor says all of this is what she’s missed. Flustered Ridge says this isn’t a party, it’s work. Steffy decides they should have a family gathering tonight. Her father says he has to check his schedule. Steffy assumes that means Brooke.

Ridge refuses to have this conversation. Steffy pointedly asks her brother to leave with her for a meeting. Once they are gone, Taylor tells Ridge their daughter was trying to give them a moment alone. She knows he doesn’t want to talk about Brooke but she’s a good listener if he changes his mind.

Taylor explains that she’s been very happy back with their family. She’s been asking herself a lot of tough questions about why she missed out when her family needed her. He reminds her everyone is thrilled that she’s back now. Seeing him smile makes her happy. She admits that she stayed away for a lot of reasons, but the primary one was Brooke. The doctor can’t help thinking about how things could have been if they’d stayed married and the memories they could have made. As she gets upset, she almost runs out, but he throws his arms around her.

Paris and Carter kiss at his penthouse. She comments that it was unexpected. He’s been feeling like it was coming. She can feel that too. As they walk around the room, he asks what’s next with Zende. She explains they have freedom in their relationship. He’s on a date with a model and she’s with Carter. Paris likes whatever is happening between them.