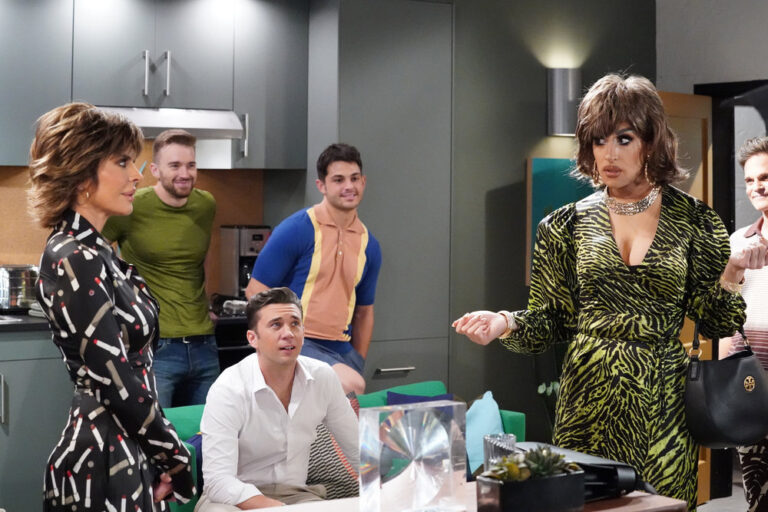 At Paulina’s place, Eli and Lani make out in bed. She forgot that everything is hotter in Miami. They make love. In the living room, Paulina’s had it with reporters, and when the doorbell rings, she yells at the person on the other side of the door. It’s Shane Donovan. He introduces himself as being from the ISA and when Abe sees him, the men cheer and hug. “It’s been way too long,” Shane tells his old pal. They’re introduced. He tries to shake her hand, but she goes in for a hug. She thinks they’ve met before. She’d never forget a face, especially one as handsome as his. Eli and Lani appear and meet Shane. They discuss Paulina’s stolen ring. The security tapes show they’ve been casing the joint for weeks. Shane says they’re trying to find the ring. He fills them in on why the stone is so important. Paulina’s pissed that it was stolen goods. “You’re right, everything is hotter in Miami,” Eli says to his wife. Paulina thinks her lawyers will have something to say about this. She suggests she talk to the man who was caught but Shane says they’re going to release him. Paulina screams at Shane for letting him out. “What does ISA stand for? Ignorant Stupid Ass?” Abe defends Shane. Eli says they’ll tail him and will find his partner and the diamond. Paulina apologizes. Shane’s been called worse. Lani offers to help. The cops have their service revolvers and Shane needs backup. Paulina worries. The cops go with Shane and Paulina still doesn’t believe that her ring is the one the ISA needs. Abe calms her down. He thinks money means security to her. “Makes you feel safe.” Paulina says he has her figured out. Abe, Lani and Eli and their babies are worth more, but “I’m still keeping that damned ring,” she says. Paulina’s friend Michelle calls, after hearing about the ring. She’s clearly upset and Paulina yells that she usually kept it in her safe but she took it out to wear it once and was robbed. She apologizes for yelling. In some warehouse, the two thugs admire Paulina’s ring. Shane and Lani kick the door in and get the thug to put the ring down. They eye their gun and Lani shoots the one thug before he can shoot her. She kicks the gun away and Eli turns up. Shane hands over one of the thugs to Miami PD and Lani grabs the ring and gives it to Shane.

John beats himself up over blowing it at the auction last night. Shane wasn’t happy. Neither were prepared for Anna. Marlena tries to calm him. Tony shows up with chocolate as a peace offering. John doesn’t want it. He reveals the necklace contains a sapphire that belongs to the Alamain empire. Tony says, “Oh dear.” John needs the necklace back. At Carrie and Austin’s, Austin gives Carrie her present. The sapphire necklace. She almost falls over at its beauty and stammers, asking how he got it. “Did you have to rob a bank for something?” He had help from his gorgeous mother-in-law. Anna beams. “Guess I have to return the tie I got for you,” Carrie jokes, about their anniversary. She asks if it’s real and if her mom paid for it. Austin admits he had Anna’s help but it was his idea to show her that he knows what they have is priceless together. He’ll never take her for granted again. Carrie swoons and they kiss. Carrie thanks him. Carrie goes into another room and Austin tells Anna he knows the final bid on the necklace. “You’re a Nosy Parker,” she says. “But half a million euros?” She got carried away. Austin thinks Carrie will figure out how much the jewelry is worth. “What is money compared to true love?” Anna asks. She wants Austin to take good care of her. He’ll start by putting the necklace into a bank vault. Austin goes to talk to Noah on a video chat. Sister Mary Moira turns up, holding a ruler.  “Anna Fredricks DiMera? God has sent me to save your immortal soul from eternal damnation,” she tells Anna. She introduces herself and says her sister is Susan Banks, her nephew EJ, Anna’s husband Count Anthony’s brother. Moira tells Anna that the DiMeras have always been so generous with the church. She saw them pay a pretty penny at the auction and assumes she’ll be just as generous. “We have wifi at the convent,” Moira says. When she turns her hair, a shock of blonde hair sticks out. Anna signs a check and Mary Moira thinks she’s being cheap. Ana takes a pen from her and adds another zero. “Bless you, my child,” Moira says. She takes off and Marlena and John show up. Anna’s upset when John tells her he’s there for the necklace. John explains the reason why and Carrie’s ready to hand it over. John thanks her, but when he looks inside the box, the necklace is missing. Anna realizes the nun took it. She explains that the nun was EJ’s aunt. John freaks out. That was no nun! It was Kristen DiMera! In a wooded area, Moira takes off her habit. She’s got on a red sexy dress. She removes the fake teeth and glasses and fluffs out her hair. She’s wearing the necklace. “God helps those who help themselves,” she says.

Chad answers Will and Sonny’s door to Billie and Kyle. They embrace. He hasn’t changed a bit since he modeled for Countess Wilhelmina. Kyle gets uptight. They’re there on ISA business. Introductions are made. Billie says Will has information on a stolen emerald. Meanwhile, Sonny walks into Will’s shower. They both apologize for not communicating better. Sonny wants to make up for it. They kiss until Leo strolls in. “Hello boys, make room for one more.” He gets under the showerhead, while Sonny and Will stare, speechless. Leo thinks he’s being patriotic by showering together since there’s a drought. He starts scrubbing himself and Sonny and Will usher him out. Later, Will and Sonny appear and are asked about the emerald. Leo swans in. He is introduced to Billie and compliments her manicure. “I’m sure you always get your man. Bust out your handcuffs, read me my rights. I am all yours,” Leo says. Sonny and Will tell him to shut up and tell the agent about the emerald. Leo liest hat they’re jealous. He says someone’s coming right now to discuss it. The doorbell rings and a Billie look-alike shows up. She was signing autographs in the lobby. Jackie Cox, a drag queen. Jackie does a skit from Real Housewives and Billie is confused. She’s never seen it. Jackie calls Billie fabulous and tells Kyle that she knows where the emerald will be. “You can be my plus one,” she tells Kyle. Leo asks what’s in it for them. Jackie gives Billie some lip liner and she and Leo take off, while Billie puts on the liner. “I like it…” Later, Agent Graham is smiling after hearing that Shane has the ring. Kyle tells Billie that Jackie looks like her. Billie doesn’t see it. Kyle says Jackie was attractive. Meanwhile, outside, Leo texts Jackie, “Just keep it together.” Jackie responds, “I don’t want to blow this!” Leo responds, “I guess there’s a first time for everything!!” Leo chuckles. Jackie texts back, “Bitch!” Chad shows up and puts Leo on notice. Leo doesn’t care, he’s watching Chad. He comments on his nice ass.