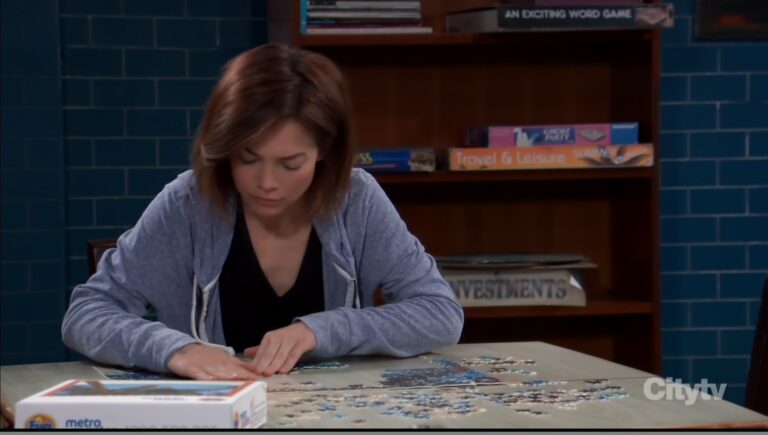 What’s coming up on General Hospital this week? Alexis challenges Gregory, Olivia tries helping a friend, and Britt is the third wheel again.

Find out who won in the 49th Annual Daytime Emmys for all four soaps!

Check out the weekly spoiler video to find out how Joss might mess up Cam and Spencer’s plan, what goes wrong when Sasha appears on TV, and why Olivia thinks everything is falling apart.

ABC will air a repeat of the General Hospital Thanksgiving episode that aired November 24, 2021.

A recap of that episode: Chase and Brook Lynn were still pretending to be Bailey’s parents. Chase let Finn know that he’s an uncle and was happy that his brother supported him.

Marshall cornered TJ, wanting a chance to explain why he ran off last they spoke.

Dante and Sam watched the Thanksgiving Day parade from their balcony with the kids and got frisky until Drew showed up at her door.

Brook Lynn announced to Ned that Valentin wasn’t Bailey’s father. Meanwhile, Curtis opened up to Portia about Marshall claiming to be his father.

SoapsSpoilers will be back with the GH spoiler video promo before this week’s episodes start airing!

Drew has a business proposition for Nina.

Carly is evasive when she crosses with Sonny.

As Spencer and Cam put their plan in motion at the pool, it goes awry.

Everyone is shoved into the pool except Trina, during a faked fight.

Things don’t go as planned when Maxie, Lucy and Sasha arrive for her appearance on the Home & Heart Channel.

Britt is disgusted by Cody.

The host of Home & Heart is Haven de Havilland (played by Morgan Fairchild).

Cody enjoys a meal with Dante and Rocco until he spots Spinelli.

While talking with Kevin, Britt receives an unexpected item.
Drew explains to Carly.

Chase refutes Finn’s assertion that BLQ is into him.

Chase doesn’t have a clue.

Alexis asks Gregory why he hasn’t accepted her challenge to write for her.

Laura expresses concern about Anna’s relationship with Valentin, while he meets with Victor in the park.

Liz sees her son but after, blows off some steam.

Anna got dirt on Valentin.

Ned and Olivia have different assessments of Cody.

As Britt and Terry connect over work and dating, they’re interrupted by an unexpected arrival.

Having overheard Anna place a phone call, Victor confronts her.

Laura is worried by Valentin’s request.

Brook Lynn and Chase agree they need to talk.