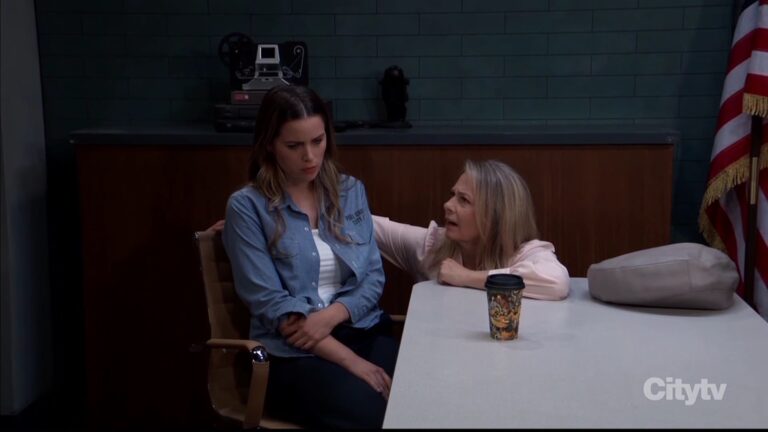 What’s coming up on General Hospital this week? Liz has more memories, Dante’s future is in question, and Maxie is questioned.

In the weekly preview, Ava gives Esme an ultimatum, Nikolas makes a confession to his son, and Sonny talks about people who never get the help they need.

Monday’s GH recap: Willow may have leukemia and Esme falls

Trina is called to the stand as Ava and Esme’s showdown escalates and Nikolas approaches Spencer.

Esme taunts Ava and winds up being slapped across the face for it.

Ava taunts Esme back when she grabs the letter to Maggie.

As Finn checks on Liz about her first day back at work, something unexpected happens.

Willow asks what TJ is worried is wrong with her as she awaits her tests results.

TJ is informed that what he thought Willow has is exactly what it is.

Sam approaches Michael as he makes a mysterious call.

When Felicia notices Mac being checked out at the pool, she takes matters into her own hands.

Esme falls over the ramparts during a fight with Ava.

Willow talks with Terry and Britt about what’s next.

Willow asks for a bone marrow test now, so she’s given a biopsy.

With Trina’s freedom on the line at her trial, Diane makes her best move as friends and family look on.

Diane does her closing arguments.

Finn finds Liz on the stairs and helps her.

Trina’s upset when Spencer is arrested.

Nik wants Ava not to call the cops about Esme’s fall.

Nina crosses with a keyed-up Sasha at the Metro Court Gardens.

Sasha is on to Smoltz and Sienna’s plan to make her confess.

Joss brings Cam up to speed on Trina’s trial.

Joss learns Cam lied to her and she has a fit.

Brando searches all over PC for his wife.

Sonny tells Dex he has a job for him.

Sonny wants to renegotiate his deal with Michael.

Dante talks to Jordan about his future at the PCPD.

Brando tries to keep Sasha from getting arrested but it’s futile.

An altercation at the Metro Court draws the police.

Maxie, Brook Lynn and Lucy meet about the recent news.

Gregory meets with Alexis, eager to see who came out on top in their wager.

Dante finds Chase at the pool.

Sam asks Spinelli for his help on a case.

Cody approaches Britt, who is not happy to see him.

Martin has a way to keep Sasha out of jail.

Lucy wants Maxie to get Sasha to retire.