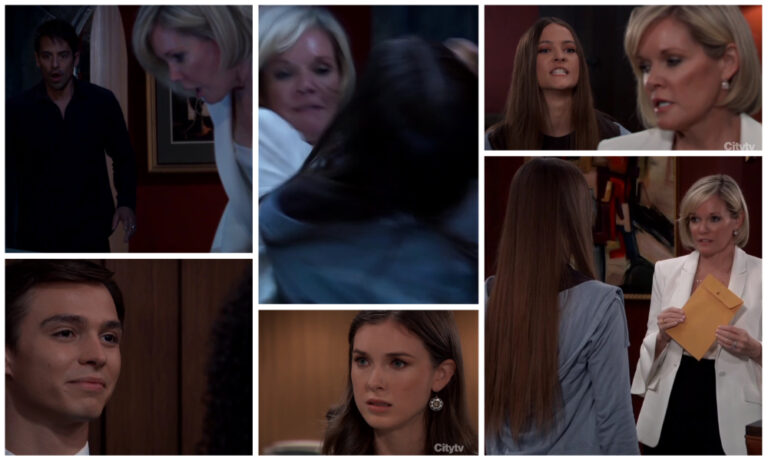 General Hospital recap for Monday, August 1, 2022. In today’s GH episode, Felicia and Mac discuss their future, Michael tells Sam his pregnancy news, and Finn blurts out that he loves Liz.

We also have Friday’s GH recap where Spencer confessed on the stand and and Ava threatened to kill Esme after confronting her for sleeping with Nikolas .

Felicia sits by the pool while some women ogle Mac as a “silver fox” and start making lewd remarks.

She leaps up and lets them know he’s taken before planting a kiss on him.

She tells him that those women were fantasizing about him.

He finds that hard to believe and tells her she’s the one who is always turning heads.

They chat about his retirement plans and he assures her he isn’t retiring any time soon.

He’s just always been a bit nomadic in his careers and is wondering what comes next.

Mac says he was just planting a seed with Dante and thinking about way into the future.

But when he stepped in as MC the other day, it reminded him of how much he liked running The Floating Rib.

The bar kept him tied to the community. She knows what he means. She tried to fill that void by revisiting her PI skills.

He tells her they may be grandparents but they are still young at heart. Maybe Sam could use her help…

“That could be fun,” she says.

Michael arrives outside Kelly’s, calling to make sure that some things show up on a background check.

Sam pops up and wonders what’s up, assuming it is related to Aurora.

Michael covers and talks about stocks. Then he tells her that he and Willow are expecting a child.

She congratulates him. He’s excited. Last time he found out he was going to be a father, it was “turbulent.” He’s just happy it’s with Willow and surprised Dante didn’t say anything.

Sam rambles about how busy she is.

Sam admits that he’s very good at keeping things close to his chest. That’s why he’s always surprising her.

At General Hospital, TJ asks Willow why she is keeping the nature of her appointment a secret from Michael. He doesn’t want to speculate about anything until they get more results back.

If she’s worried it’s bad news, why doesn’t she want Michael there to support her. She explains he’s going through a lot right now. He reminds her that her plate is full too.

Willow doesn’t want to take his happiness away from him until it’s necessary. He suggests she confide in Carly but she assures him she can handle this until they get news.

He gets a text and claims he has to leave to check on a patient.

TJ walks out and calls to see how is on call for oncology. He needs a consult about some results that just came in.

Another doctor arrives and checks over the tests. He tells him his diagnosis is spot on.

Liz and Finn get exhausted taking the stairs up to work. She’s happy to be back at work. When she mentions she’s “fully recovered,” he assures her there is no shame in needing more work for her recovery.

She claims she’s processed her grief and the worst is behind her. Now she just wants to get back to normal. He starts apologizing for smothering her.

“I’m trying to find the right balance with privacy with someone I love,” he admits. She’s startled. He knows they’ve been taking this slow, but he’s in love with her.

The nurses gets a text from TJ and hurries away.

TJ hands her some blood work to print out. The oncologist says he will go over it with Terry and they will discuss what options Willow has.

Willow comes out and spots the doctors together.

She heads back to the exam room,. when TJ arrives she admits she saw him with the oncologist and asks if he thinks she has cancer. He’s worried she has leukemia.

Liz bumps into Finn. She gives him a kiss and says she loves him. After she walks off, he, throws his arms in the air.

When she’s walking down the stairs, Liz hallucinates seeing Peter there and has to sit down.

At the court house, another recess is called. Trina’s parents demand to know why she didn’t use her alibi before. She would have if push came to shove but it was a last resort.

They know that what Spencer said isn’t necessarily a slam dunk but it might create some reasonable doubt.

Taking Taggert aside, Portia tells him how hurt she is that their daughter decided to protect Spencer over herself and left them all dangling. This is all unbelievable to her.

Joss and Rory corner Trina and she wonders why Spencer finally confessed.

Diane takes her client away and reminds her she is on the stand next. She’s going to have to pursue a different line of questioning, one more personal than they planned.

Diane admires her for being so brave and tells her she needs to be the heroine in her own story.

Trina’s parents come over and tell her she will be great. She parrots that she will be the heroine in her own story.

The session resumes and Trina takes the stand. She confirms what Spencer said when he testified.

She kept this silent because she knew it wouldn’t be enough to clear her name and she didn’t want him to get into trouble.

Diane uses this to stress that Trina was willing to sacrifice herself for someone else. She asks her if it was an act of love. A tear runs down Trina’s cheek.

The lawyer gets her to open up about her feelings for Spencer. He smiles. Portia and Rory don’t look happy.

Nikolas takes Spencer into the hallway and reminds him he may have just thrown away his freedom.

They debate what he did and how sneaky Esme is.

The prince wishes he had included him in his plans. His son wants to get back into the court room, but Nikolas stops him to tell him something important.

Spencer can’t wait and walks off. Nikolas gets a call that there is some commotion at home.

At Wyndemere, Ava orders Esme to go to the court house and confess. Esme protests she’s innocent and she has no interest in being a fugitive.

Ava threatens to have her killed.

She’s killed for a lot less.

Ava refuses to let Trina go to prison. Esme wonders if Trina is filling the void of the daughter Ava actually drove away just like she drives away everyone.

Hitting her limit, Ava smacks her. “That all you got?” Esme asks.

Ava tells her that she will never be loved. She finds the envelope that fell from Esme’s hands and waves it around.

When Esme demands she hand it over, Ava wonders what’s inside and gets back to taunting her.

When she tries to open it, Esme tackles her.

They wrestle around the room.

Ava chases her out to the turret.

As they fight, Esme goes over the edge. Nik appears and they watch her fall, shocked.