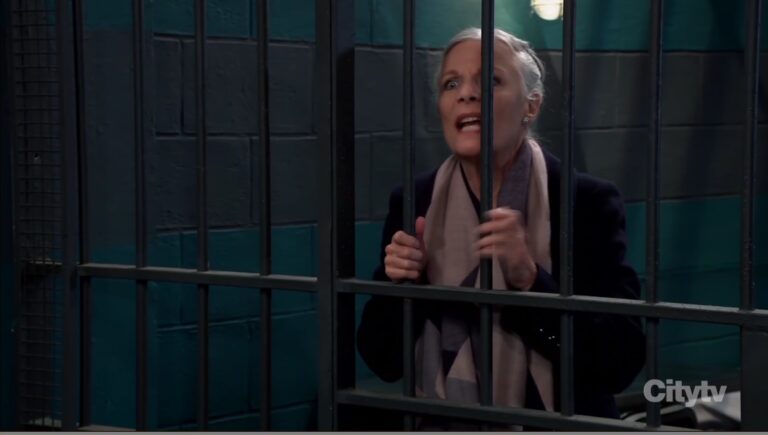 SoapsSpoilers’ General Hospital recap for the Wednesday, January 12, 2022 episode. Today, Alexis shocks Tracy by getting her out of jail, while Sonny asks if Carly wants out, considering she’s been gone since Jason died. We also have Tuesday’s GH recap where Sonny and Carly had it out over how broken their relationship was and she kicked him out, while Austin and Britt went out on the town.

Austin sees Brook Lynn at General Hospital. He’s rude to her and she apologizes for how they got off on the wrong foot. She’d like to start over. He turns around and walks way. She follow shim and reminds her she almost destroyed his reputation. He almost got fired! She tries to smooth it over.

He pours some coffee and says no, he won’t let bygones be bygones. At least she wasn’t as destructive with him as she was with Valentin. She’s genuinely sorry for hurting him. He thinks she knew people would get hurt and did it anyway. She doesn’t think he’s so different.

She’ll talk to the rest of the clan to see if something can be done for him. He calls that buying him off. She’s trying to ease her own conscience by buying his. She’s blinded by her privilege and thinks everyone’s so self-serving like her. She used Leo and he reacted the way any doctor would. She tears up and asks if he’s finished. He comments he’s only getting started.

Sam and Alexis wind up at Charlie’s. She tells her mom they’re all proud of her new job. Sam hopes that Tracy pays for what she did to her. Alexis wonders if losing Luke was payment enough. Harmony strolls up and Sam rolls her eyes. Alexis invites her to sit and explains to her kid that she owes Harmony for not letting her drink New Year’s Eve.

They talk about Tracy and asks Harmony’s opinion. She thinks Tracy took away her agency when she framed her but Alexis is in control about what happens next. She agrees and goes to make a call. Sam takes a moment to get a few things straight.

Tracy yells at the guards in jail. Ned shows up with Dante. He just posted bail. Martin Grey shows up and introductions are made. “The Kentucky Fried lawyer and pony tailed gangster.” Martin says, “That’s us.” He wants to sit and cut her a plea deal but Tracy wants them expunged. She has the influence of the Quartermaine name.

She fires Martin, causing all the men to drop their jaws open, collectively. Ned asks her not to do this and asks Martin not to go.

Martin says it’s too late. “Leona Helmsley gave me the boot.” She fires Ned, too. They try to talk her down, unsuccessfully. Martin takes Dante aside and tries to get him to talk to the DA, while Ned asks his mom if she’s lost her mind. She needs to get back to Amsterdam to set Luke’s affairs straight.

She can’t do that if she has this hanging over her head. Besides, she needs to talk to him about Brook Lynn and Bailey. She thinks she’s hiding something. Ned asks what that is.

At Metro Court, Olivia hugs Robert. She asks about details of her mother-in-law’s case. He can’t tell her anything. She knows. This was an excuse for her to call him. He was doing her a favor by keeping his distance because of Ned. She tells him what happened between them wasn’t about him. Robert’s not sure whether to be glad or sad. They smile at each other. She tells him that Ned crossed the line when he cheated with Alexis. Robert says, “If only you didn’t love that bugger.” She goes when Alexis calls for a favor.

Nina summoned Valentin to Crimson. She’s sorry for what happened with Bailey. He tells her Charlotte’s taking it surprisingly well. They catch up and she asks to join forces, personally. She made a new enemy, who it turns out his his. They discuss Brook Lynn and Nina asks him not to be too hard on her. She feels like an outsider.

They talk about what they have against the Qs. She only has something against Michael. She doesn’t want to lose her grandson. Mike understands. “Mike?” Valentin asks. She comments that it was the name Sonny went by. Valentin doesn’t know if going toe-to-toe with Sonny is best.

She can’t help that and asks not to go against Michael. It won’t make things easier with Sonny. Nina realizes he’s changed in telling her to turn the other cheek.

At home, Sonny doesn’t automatically renew his prescription for Lithium. The kids race in and hug their daddy and he gives them gummy vitamins. They tell him they’ll take theirs if he takes his. He looks at the bottle of Lithium and says he will. Carly wanders in and they embrace before Frank brings the kids to school. Carly snipes that she thought they agreed.

He wouldn’t stay last night. He respects their marriage enough to not leave it hanging. He tells her he remembered who he was and who she was and that’s why he didn’t tumble into bed with Nina. He remembered how much he loves her. Isn’t that enough? She needs more than words and memories.

She yells that she needs time. He tells her to forget Nina. It’s in the past. She asks why he was with her at New Years and why she had to hear it from Nina. He explains that she took him home and left.

This pisses Carly off more and she yells that she hates this. She wants to trust him the way she used to. “You wanna call it quits. Is that what you’re saying?” He thinks she’s using Nina as an excuse not to reunite. Carly exclaims,”What?” Sonny clarifies. “Part of you is gone and it went with Jason.” She won’t apologize for Jason but as long as Nina is alive, there’s no chance for them. “Is that a threat?” He asks.

She tells him it’s up to him to kill her off in his heart, not physically. She decides since he won’t move out, she will. She’ll be there for the kids in the evening and morning. Sonny rubs a hand over his face and throws his pills across the room and takes a drink.

Back at Charlie’s, Sam asks about her time in the cult. Harmony reveals it made her sick about what she did to those women, including her sister. Sam says her mom could have one little slip so easily right now. She asks Harmony to be straight with her. Harmony promises and believes she and Alexis can help one another. They’re friends. Harmony asks Sam to let her prove herself. Sam nods. She can try, but she’ll be watching.

Back at the jail, Martin returns with Dante and Robert. They tell her there’s no case after the DA reviewed it. She asks what changed and Alexis appears. She isn’t prosecuting and there’s no case. Tracy takes off with out an apology. Alexis signs off and Ned asks why she did it. “I did it for Luke,” she admits, but mostly for her. Later, Martin gets a call from Nina for legal advice.

Valentin stops Brook Lynn and Austin’s argument at GH. Brook Lynn tells him that she has to go tend to Chase and their baby. Austin laughs as she goes. Valentin knows she thinks he’s lost his edge. Austin assumes he wants to make her pay. Tracy appears and pulls Brook Lynn into an elevator and brings up Maxie’s baby.

Carly goes to Olivia and tells her she’s moving in to the hotel for a time out. Olivia holds her friend’s hand.