Home » General Hospital » GH Recaps » Tracy’s Arrested — & Olivia Calls Carly Out on Being Hypocritical, While Sasha Struggles on Her First Day Back at Work

Tracy’s Arrested — & Olivia Calls Carly Out on Being Hypocritical, While Sasha Struggles on Her First Day Back at Work 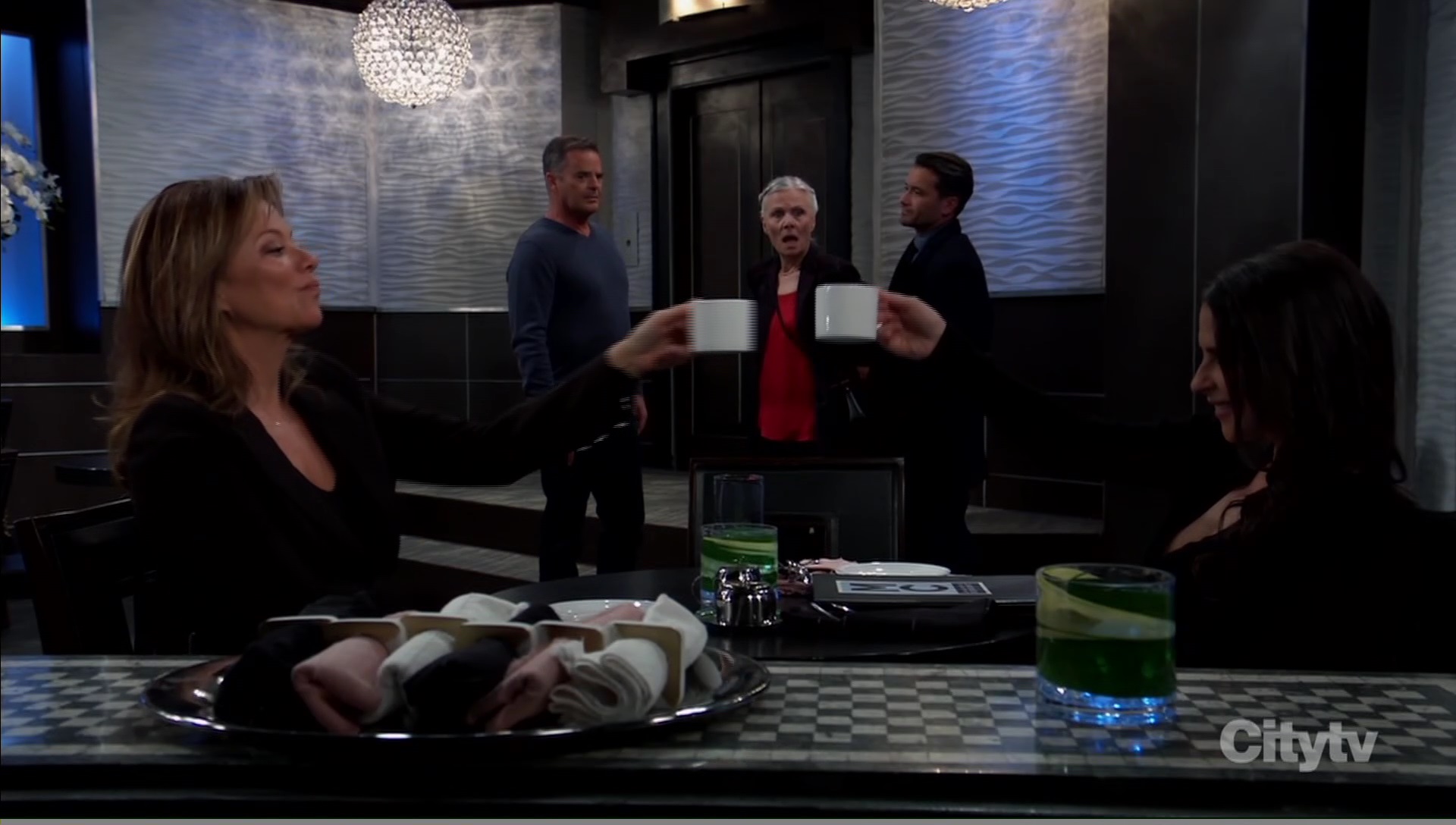 SoapsSpoilers’ General Hospital recap for the Thursday, January 6, 2022 episode. Today, Brook Lynn panics to Maxie about Tracy’s thoughts on Bailey, while Sasha goes back to work, and Sonny goes to Dante for advice. We also have Tuesday’s GH recap where Valentin listened to Victor’s idea to work together, Tracy realized Bailey’s Maxie’s daughter and Robert mourned Luke’s death.

At home, Tracy wonders to Bailey what Brook Lynn is up to when the woman walks up. She’s bringing Bailey to daycare. Tracy asks if Maxie’s going to be there. Felicia’s concerned she’s getting overly attached to the baby and using her as a substitute.

Brook Lynn nervously tells Tracy she doesn’t see the harm. Tracy admits she never saw her as the maternal type. Brook Lynn shrugs. Neither did she.

Lucy walks into Maxie’s office at Deception. She excitedly tells Maxie that she wants their company — their baby to thrive. Maxie’s face falls and Lucy apologizes for using the word ‘baby’. Maxie assures it’s the right wording.

Brook Lynn arrives and pulls Maxie from the room to tell her that Tracy is positive that Bailey is Louise. They’ll have to deal with it later. They head back inside and Lucy talks business. She wants to be the face of Deception but the others think it should be Sasha.

Sam and Alexis get drinks at the bar and talk about the new job. Ned drops by their table and tells them that Luke died in that cable car incident in Austria. Alexis and Sam are surprised. He shares that his mother told him and Alexis’s eyes widen. Tracy shows up and tells Ned she needs to see him. Now. She looks at Sam and Alexis and says a quick hello. They’re shocked and Alexis gets up and says she’s sorry to hear about Luke.

She still wants Tracy to own up to what she did. Tracy thinks it’s enough she is in a house with Monica. She tells Ned that something is going on with his daughter and they need to talk.

The women snipe at each other and Tracy asks if she slept her way to the top for this journalist job this time. Nearby, Gladys hugs Brando.

She has missed him and talks about losing her precious grandson being a knife in her heart. She prays for him. Sasha turns up, surprising them both. Brando comments that they haven’t spoken since Liam’s funeral.

She needed to be alone. She thinks the best thing for her is to get back to work since they’re launching their IPO. They profess their love and she goes.

Gladys commiserates with Brando about his instincts on letting Sasha take time to breathe. She tells him she too is giving him space until he’s ready to talk. He appreciates it.

Ava walks into Nina’s office to congratulate Nina for getting out of those charges.  The women embrace and they open wine as Nina tells Ava details about Willow taking the stand and that everything came out. Ava wishes she was there.

She’s shocked that Carly walked out on Sonny after hearing that he felt the same as Nina. Nina tells her friend about taking Sonny home on New Year’s Eve. Ava asks if there was more to it but Nina says they only chatted before she left. Ava watches Nina’s face. “You really love that guy, don’t you?”

At home, Avery saves a cookie for Sonny. Carly tells her daughter that daddy’s not home but it’s not like last time. He’s not gone for long. Avery asks, “Then where is he?” She lies that he’s away on business. Olivia wanders in and Avery goes.

They discuss how Nina skated. Olivia learns that it’s because she and Sonny fell in love. “But he didn’t know who he was and she knew that and took advantage of him,” she says. She calls men dogs. “I give you my husband Ned. I’m a dog lover,” she says.

Carly admits she kicked Sonny out. Olivia calls her out on her hypocrisy. She asks what Sonny said when she told him about her feelings for Jason. Carly looks upset and questions her. Olivia saw her at the wedding and she looked like a woman in love.

Carly confesses that yes, she was in love but she bottled those feelings up. She went back to the man she loves. She made a choice. Obviously Sonny can’t do the same.

Carly needs to hear good news so Olivia admits Ned will adopt Leo and she and Ned will renew their wedding vows. Carly’s thrilled. They agree Leo’s a great kid and it won’t change though he has Autism. Olivia asks her not to take too much time away from Sonny. Carly tears up and they embrace. “What would I do without you?”

Olivia says she won’t have to find out. She and Sonny are destined for each other.

Dante visits Sonny at his penthouse and asks how he is. Sonny asks how he found him. He explains Mikey told him. He asks why Sonny’s there and not home with Carly. Sonny explains that Nina dropped him off. Dante asks if she stayed and Sonny denies that.

“Did you…want her to?” Dante asks. The Mike part of him wanted Nina to stay, he admits. But he wants his wife back. Still, he can’t get rid of his feelings for Nina. He wants Carly but asks how he makes her believe him. Dante says he should talk to her.

He’s not sure she wants to see him. Dante insists that even though it’ll hurt, that’s the way it has to be. Sam calls and asks how soon he can make it to Metro Court to make an arrest.

Sasha strolls into the office and tells Lucy she’ll be the face of Deception now that she’s back. The women gather around her and think she should be home but she’s ready to be back. The nanny walks in with Bailey. She’s looking for her pacifier. Sasha looks at the baby and the woman all cringe. She greets the baby and then tells them she’s going to freshen up before her makeup artist arrives for the photo shoot.

Once in the bathroom, Sasha shakes and tells herself to get it together. She applies lipstick and returns to the office. Everyone comments on how refreshed and great she looks. Maxie and Brook Lynn talk in the corridor.

Maxie thinks Tracy would exploit them if she knew the truth about Louise. They need a plan.

Back at Metro Court, Tracy tells Ned that there’s something about his daughter they need to discuss. Before they can, Dante arrives and arrests Tracy. (This was for the time that Tracy moved Alexis’s car to make it look like she crashed from a DUI and then called police on her.) She’s shocked and looks over at Alexis and Sam’s table. They clink coffee mugs and smile.

Back at Carly’s, Olivia asks if Carly told Sonny about how she feels about Jason now. Sonny walks in.