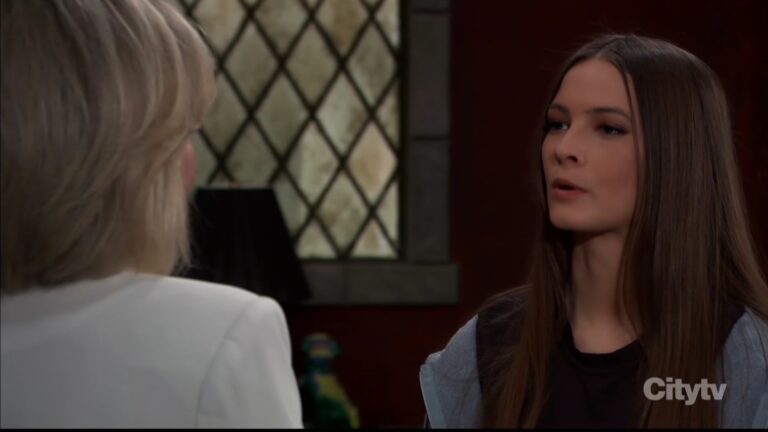 We also have Thursday’s GH recap where Nikolas confessed to sleeping with Esme and Ava vowed to destroy him.

Brando is startled to bump into Michael and Dex in a stairwell. Michael pretends to be arguing with Dex. Brando gets between them and sends Dex away.

He’s confused about what they were doing together and offers to speak to Sonny. Michael doesn’t want that.

Brick finds Sonny working out at a gym. He’s back from assessing the family situation of the west coast.

Things have died down so now he has time to find someone to fill Jason’s shoes. Sonny already has an idea. Dex has fallen into his lap. He’d been running the gym and seems hungry.

Brick won’t question his judgment but needs to question Dex’s.

When Dex shows up, Sonny introduces the two men. He assures Sonny that Felty won’t be opening his mouth. When he mentions the cops showed up, Sonny worries but Dex insists he said nothing.

Sonny calms down and says he did the right thing. He explains to Brick that they roughed up Felty and Joss filmed the whole thing but Dex smoothed it over.

Once Dex steps away, Brick says he’s too cocky. Maybe he deserves a chance but he’s not sure that he can handle the work. This generation needs a lot longer to mature than the previous one.

Brick will run a background check and Sonny wants to subject him to a trial by fire.

As Willow and Sasha walk the halls of General Hospital, they talk about how accidental running over Harmony was. Willow is sure it must have been traumatic for her too.

Sasha doesn’t know what she did to get a friend as generous as she is. Her friend says the feeling is mutual.

When Sasha tells her how lucky her baby will be to have a mother life her, Willow flashes back to TJ telling her about possible health complications.

TJ fetches Willow away for her check-up. He gets another blood sample for her to run a second test. She wonders what he’s worried about. Michael interrupts.

When the doctor takes off with her sample, Michael holds her hand and tells her how lucky they are. Everything is going to be different this time.

They chat about their childhoods and his relationships with his brothers. When he gets a text, he says it’s a work thing and he needs to take care of it. Once he takes off, she sighs.

When TJ returns, he asks Willow if there’s a reason she didn’t tell Michael this isn’t a standard OB appointment.

Michael meets with Dex, who tells him that Brick will be digging into his past. Michael assumes this is a good sign that he’s moving into the inner-circle.

Back in the hall, Sasha contemplates not going to therapy. Brando returns and she informs him she’s not going to her session. The paparazzo who came after her is there. She and Willow met and unpacked a lot. Now she’s all talked out.

He understands and offers to change her appointment. She snaps and accuses him of smothering her. He just wants her to get better. She needs to talk to a doctor, not Willow.

Brando was an addict too so he knows what she’s going through. She yells that he’s trying to control her. Given the way her life is spiraling out of control, he wonders if someone should control her.

He apologizes for that. He’s just worried about her. Sasha doesn’t want to talk about this and needs space away from everyone.

She runs off, getting a text from Sienna asking to get together to party.

At Wyndemere, Esme tries to hurl her stuff into her luggage when Ava pops up to call her a “whore.” “Takes one to know one,” Esme shoots back.

The Jerome thinks that sleeping with her boyfriend’s father is beyond tacky. Esme reminds her that she slept with Morgan and Sonny and Avery is a product of hate sex.

She’s determined to leave town but Ava says she’s not going anywhere until she pays for what she’s done. Ava has sensed she was a smart psychopath all along and went much further than Spencer would ever go.

All of her demented acts weren’t enough. She still had to trick Nikolas into falling into bed with him. Laughing, Esme says she only had to be there to catch him after months of being emasculated by his wife.

She accuses Ava of driving him away, just like everyone else she cares about. She even adds that she walked away from Julian and left him to die and away from Kiki.

Ava finally snaps after having her failures thrown in her face. Esme repeats that Nikolas came running to her. She didn’t need to go after him.

It finally dawns on Ava that everything she’s done to her seems far too personal to be done simply for Spencer’s sake. “What the hell did I ever do to you?” she asks.

Esme says she treated her the same way she’d treat anyone else. Everyone in town is a gossip and almost all of them hate her so getting dirt was easy. Ava still assumes there’s more.

Ava demands that she do the right thing for the first time in her life and exonerate Trina. Esme tells her the whole idea she framed her is crazy. The Jerome threatens to have her killed.

At the court house, people are perplexed when Spencer is called back to the stand by Diane. He says that he knows Trina didn’t distribute the video because she was with him when it was released.

He is forced to admit that he snuck out of Spring Ridge for day. She saw him when he escapes. A tear runs down Trina’s cheek.

The ADA objects that none of this can be verified.

The Cassadine explains that someone was bribed for him to escape. It was the anniversary of his mother’s death and he needed to visit her grave. That’s when he saw Trina.

Diane reminds him that he could be jeopardizing his freedom by making this confession. Tearing up, she says that at a certain point you have to start doing the right thing.

The lawyer pushes him to explain who he thinks could have made the video. As she prods, the ADA objects but is overruled. Eventually, Spencer admits he suspects Esme. Everyone in the peanut gallery smiles.

When the ADA cross-examines, she gets him to admit he was not with Trina when the video was filmed, he was with Esme. It’s the video that’s in question.

She points out that emails can be scheduled, they don’t have to be live. She demonstrates how this can be done. Diane objects to this.

The judge calls the lawyers to the bench. Spencer tells Trina he’s sorry this didn’t work. Trina’s parents wish they’d told her her Spencer was her alibi.

On her way out, Joss tells Spencer she knew he would do the right thing eventually. Nikolas grabs his son and asks to talk.