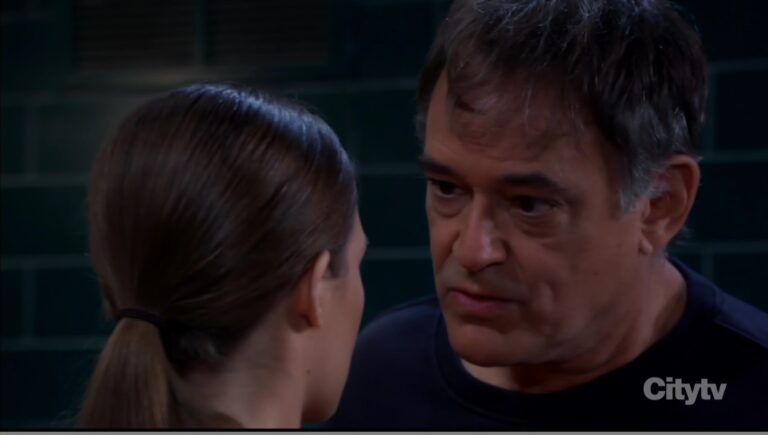 General Hospital recap for Thursday, May 12, 2022. In today’s GH episode, Felicia and Nina have a heart to heart, Finn interrupts Liz’s reunion with Franco, and Carly heads to the hospital for a DNA test .

We also have Wednesday’s GH recap where Liz received a disturbing message from the spirit realm.

Spencer strolls into General Hospital to see Britt. She wonders what he wants and starts teasing him about sneaking around. He needs her help. She agrees only if he asks nicely.

“Pwetty pwease Bwitt,” he begs. Laughing, she tells him how cute he used to be. Sitting down, he pulls out the pill he swiped from Esme’s room and asks what it is.

She looks it up and gets serious, demanding to know who it belongs to. She tells him it’s an opioid analgesic for severe pain management. He tells her it’s Esme’s.

The doctor tells him what the side effects are. He wonders what happens if you mix it with alcohol. Britt says that would be a big problem and can short term memory loss. She demands to know what is going on.

He’s not explaining. She won’t let him leave. He doesn’t want a lecture. She tells him he can’t let Esme use pills if he wants to be in a healthy relationship. Laughing, he asks what she would know about one of those.

Spencer lists her romantic failures and suggests she’s never been in love or loved. She tells him at this rate, she’ll never know what love is.

Pacing the hall, Finn is on the phone to Ava, trying to figure out where Liz has disappeared to. Laura arrives. She’s also looking for Liz. The mayor suggests that the nurse might be with a medium.

At Liz’s place, Chelsea the medium tells Liz that the spirit doesn’t want a new family being formed in the house. Finn keeps calling. Liz begs Chelsea to let Franco’s spirit know she is listening.

When she begs for a sign, the doors blow open and the candles go out.

As Liz shuts the doors, Chelsea’s face changes. “I’m not Chelsea,” she announces. Liz guesses she must be Franco. Chelsea ventriloquizes that he will always be with her and she should never walk away.

Liz needs an explanation. Finn and Laura walk in. Acting faint, Chelsea sits down and snaps out of it. Liz tells them they showed up at the worst possible time. Franco’s spirit was there.

Liz tells them this is the answer they have been looking for. Franco has been there all along. She senses Finn doesn’t believe her. He thinks she’s frustrated after months of coming up empty. 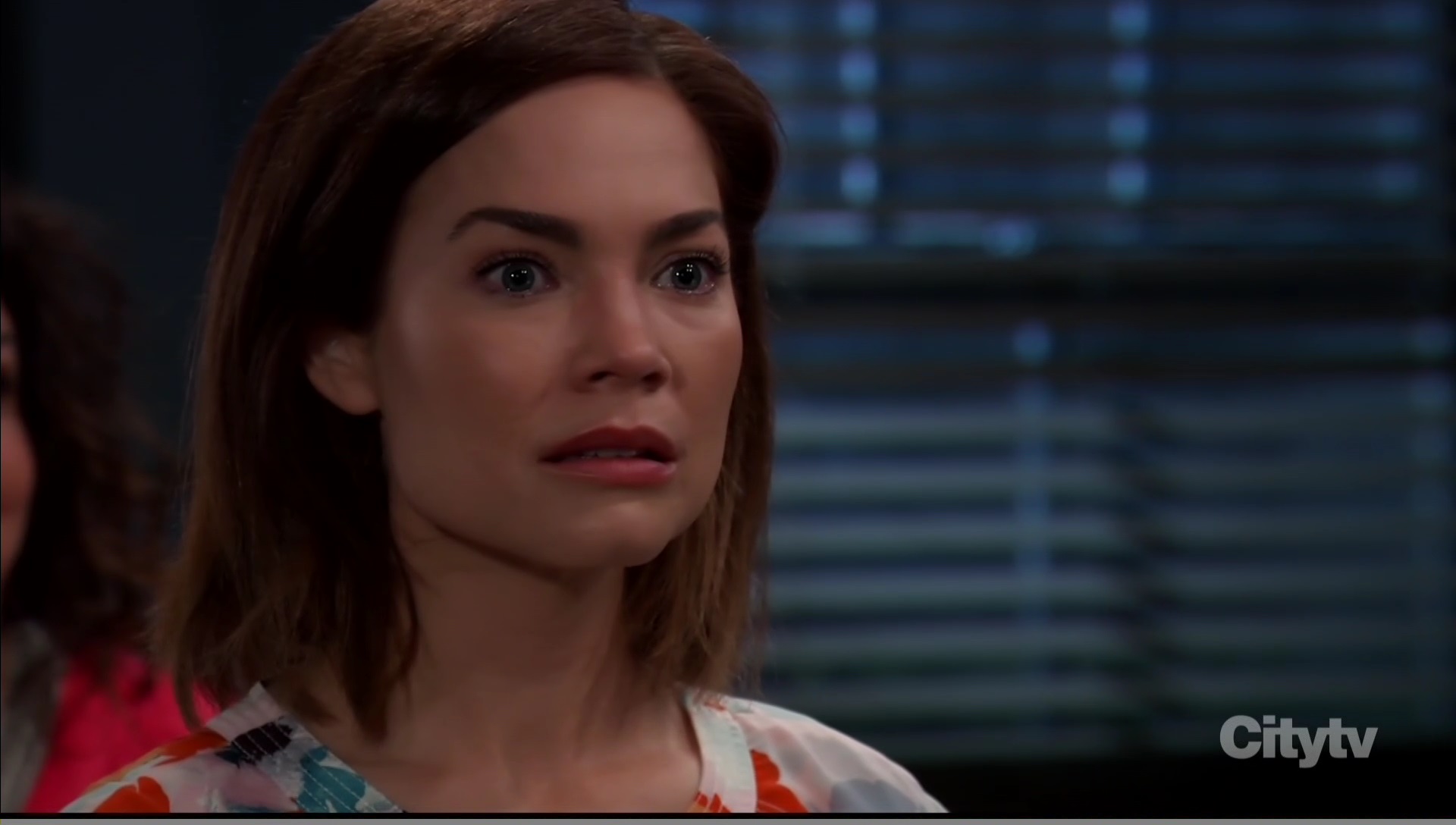 Finn says that, however unorthodox it may be, it isn’t impossible. Laura asks her to come to the penthouse. Liz says there is no longer anything to be afraid of.

Laura reminds her the kids are at her place and they could use seeing her. Liz tells Chelsea that they will meet again. The medium assures her the answers are there for the taking. 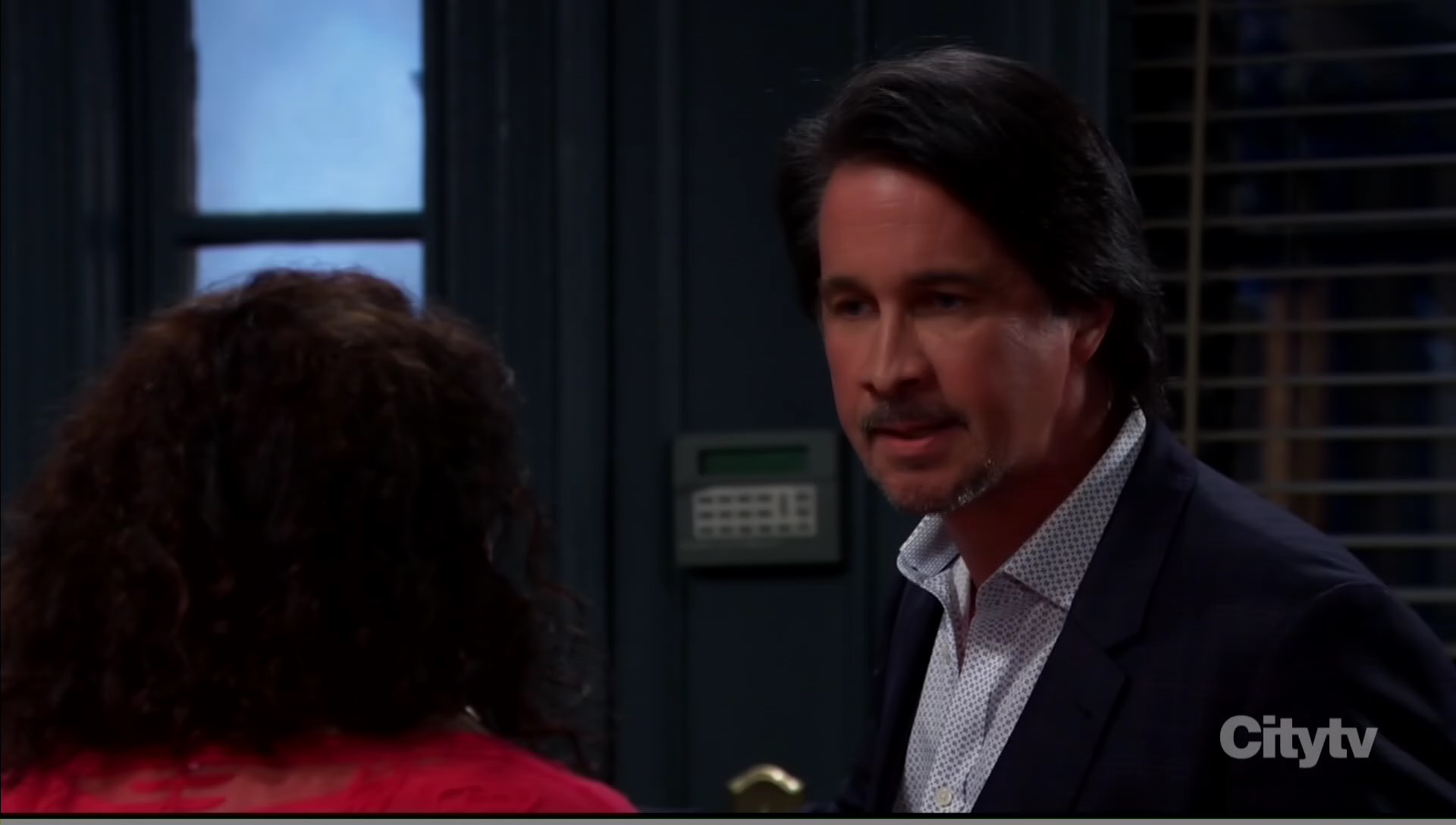 After Laura shows Liz out, Finn accuses Chelsea of lying to a vulnerable woman. “I wouldn’t know, but you would,” she says. She gives comfort to someone asking for it. He tells her not to call again.

Chelsea won’t turn Liz away and suggests he come next time to give support to the woman he claims to care about.

Esme is doing her rounds at Spring Ridge when she stops by Ryan’s room. He plays up being paralyzed. She helps the orderly get him into bed and then claims one of the inmates down the hall made a mess.

After he takes off, she shuts the door. Ryan leaps up and tells her that was well-played. She explains Ava and Nikolas are on the rocks. He reminds her that unplanned communication like this threatens their plan.

Ryan wonders how badly she must have screwed things up to show up like this. She admits that Spencer has been avoiding sex. He claims it’s because they are learning to trust each other again.

Ryan ponders this. She adds that she caught him going through her things. He may have found the meds but he certainly found her nanny’s letters.

“You fool!” he says, leaping up, assuming Spencer is onto her. It’s obvious that Cam is in on this too. He reminds her of how deceptive Spencer is. Now all they have built is in danger of crashing down.

“Wrong! Everything you built. There’s still time for me,” she says. He’s glad to see she has inherited her mother’s instinct for self-preservation.

She vents about how much Spencer has hurt her. He knows the feeling of being exploited by someone and flashes back to being stabbed by Felicia.

“There’s only one thing to do in return. Make them all pay,” he says. The best Spencer can do is exonerate Trina. She needs to focus on destroying Ava and Nikolas. 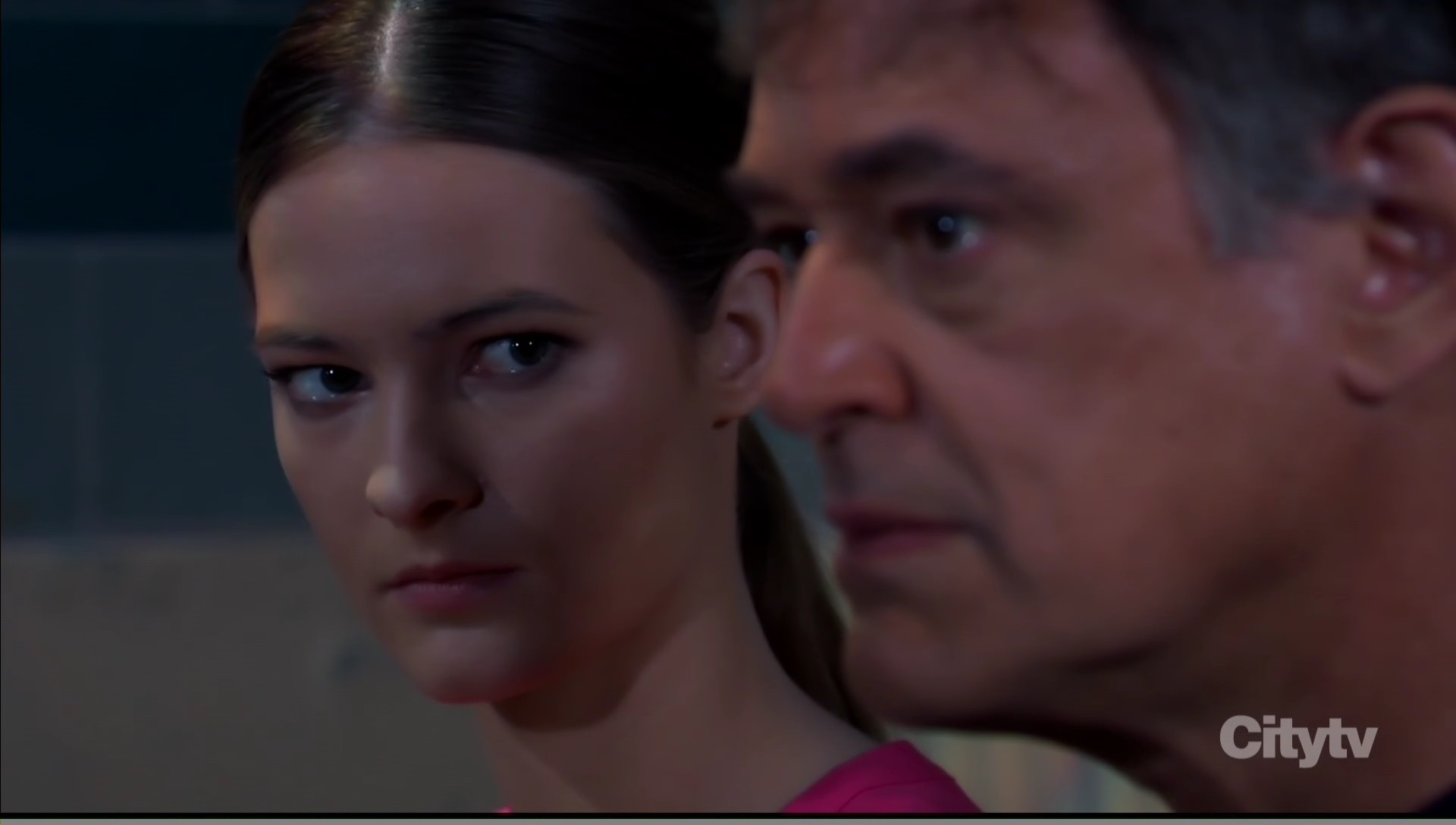 That means she needs to seduce to the prince. “If only to see the look on Spencer’s face when he finds out,” she says. Then they can turn their attentions on the rest of their enemies.

GH spoilers to May 20

Felicia is at Maxie’s, talking on the phone about getting baby vibes from Mac. “For some, kids just aren’t in the cards,” she says as she opens the door. It’s Nina on the doorstep.

She came to see the kids. Felicia points out it’s late and they are asleep. She invites her in for some popcorn. As they cover bowls of the stuff in garlic salt, they talk about recipes.

Nina thanks her for inviting her in. The Invader is about to run a horrible story about her. Felicia knows. Nina suddenly realizes how connected she is to Carly and Michael and wonders why she didn’t slam the door in her face.

Felicia reminds her that Nathan loved her and James is her nephew. That makes them family. She will always have a tie with Bobbie, but when she looks Nina in the eye, she can see her own pain. 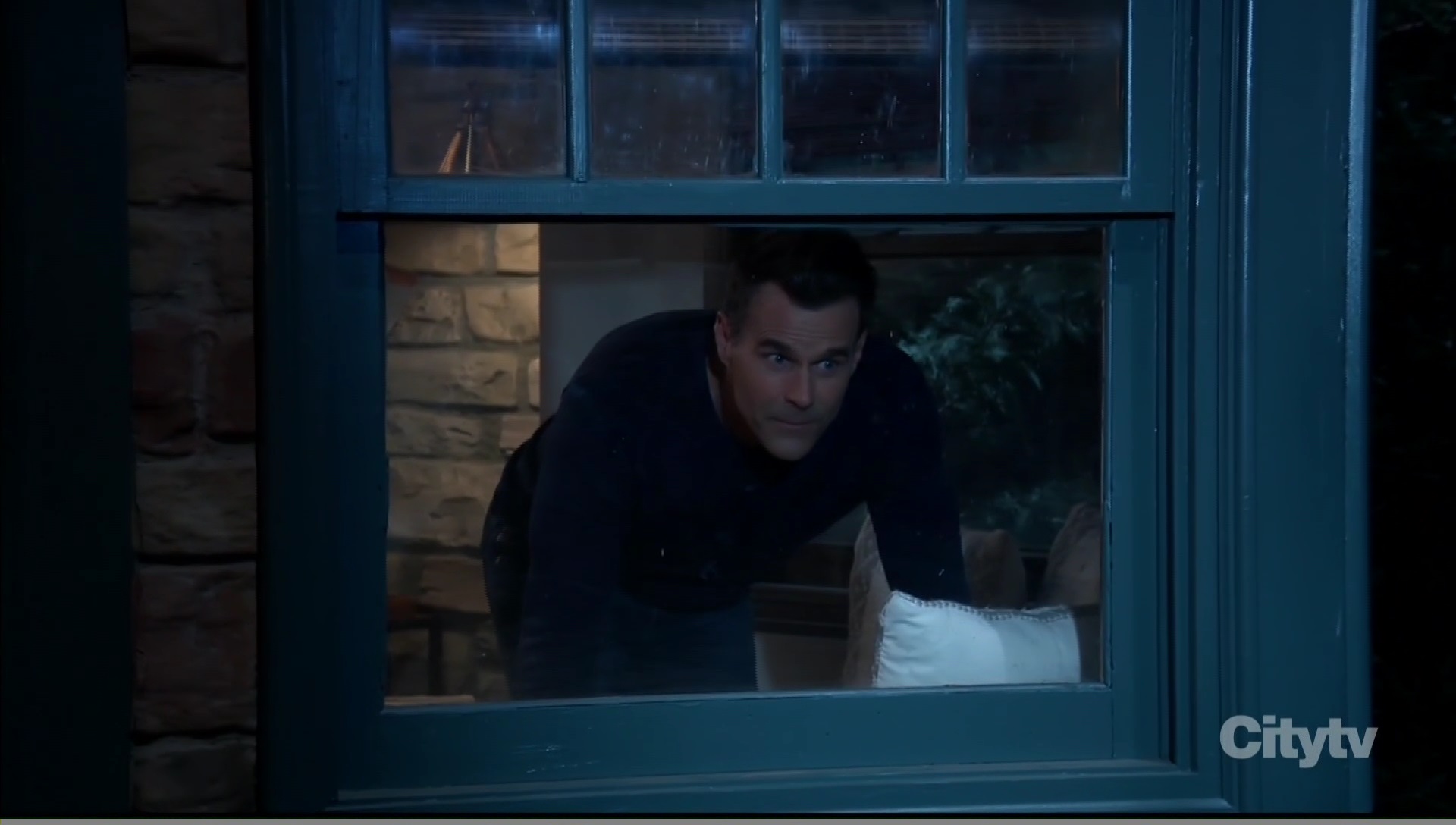 Michael and Willow are surprised when they walk into the gatehouse and find Drew and Carly there. Drew claims he just saw her waiting outside so he let her in.

The couple tell them that they ran into Sonny and Nina when they were visiting Jonah’s grave. She was visiting Nelle’s grave. Michael thinks Nelle clearly inherited Nina’s crazy. Drew points out that if that’s true, Wiley would have to.

Drew reminds them that, when Wiley gets older, he might want to know his grandmother. Michael knows but by then he will be armed with the knowledge of what an awful person she is.

Willow gives Carly a key to the house. Michael tells his mom to call first next time. She gives them a hug. Once she and Drew are gone, Willow admits she was worried he was going to cut Drew out too.

She tells him that they can’t shield Wiley from everything. They may have to compromise. Pulling away from her, he asks who she is expecting him to compromise with.

He tells her that she and Wiley will always be his priority. No one will come between them.

Drew and Carly arrive at General Hospital. He reminds her that he stole a toothbrush and glass for the DNA. She tells him she no longer requires his services. Drew insists they are in this together now.

Carly is not going to say anything to Willow right now. Drew asks what she will do if she gets proof that what Harmony said is legit. Carly claims she will do the right thing. Spotting Britt, she rushes over and asks how to get a DNA test.