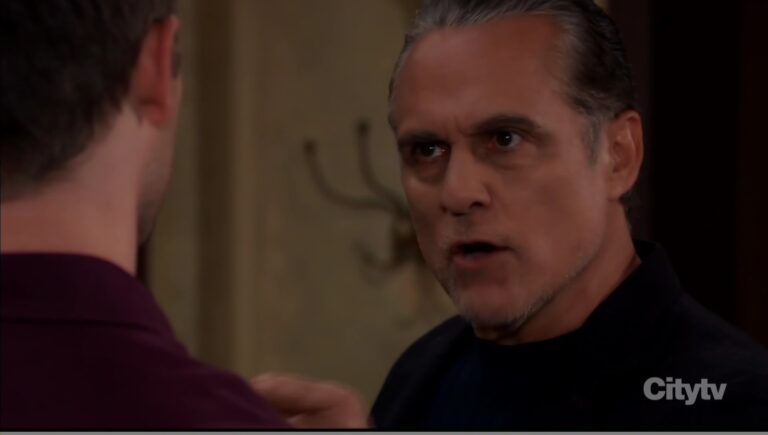 We also have Tuesday’s GH recap Willow let Carly know she doesn’t want to find her bio mom and Marshall revealed the truth about himself.

Miss Wu brings the Harbor Master was fired and he’s her points person. She says without Vince, they have no easy passage. Sonny will handle it. He yells that he’s the one who is in control.

She didn’t mean any disrespect. She reminds him that they agreed to tell one another of any issues coming up. He says not to worry. He thinks he knows the source and is handling it.

She presses him but he shuts her down.

Dante finds Brando at the gym as he’s looking for  Sonny. Brando brings up Dex, Sonny’s new goon. He’s concerned that the guy will try to score points by doing something to Michael.

Dex watches Michael on a call in the gorgeous stable. Dex hides his gun and says he’s there to show initiative. Michael kicks the guy out. It’s private property. Dante and Brando appear.

They tell Michael who he is and get rid of him. Brando follows him out and says he’ll go with him to tell Sonny about his bad sense of direction. Inside, Michael says he’s fine and asks him to mind his own business.

Dante wanted to make sure Dex didn’t rough him up. He’s being obstructive and asks his brother if it’s worth it to humiliate their father. Michael brings up the history about Nina keeping her secret and gripes about what happened in court.

Michael doesn’t want peace. Sonny betrayed him, the code and says he doesn’t care about his family. “He proved that.” Dante knows that he got the Harbor Master fired. Michael shrugs. He doesn’t want his kid to grow up with the son of a mobster.

Dante asks if his revenge makes him better than Sonny. He says it’d be better to cut him out of his life rather than seek revenge.

Brad sits with Brook Lynn poolside. He asks if she saw the video of Britt trashed. Brook Lynn laughs. She sure did. She’s surprised he didn’t stop her from embarrassing herself. She asks who shared the gif.

Brad admits he did. She blasts him. Cody appears and Brad preens. He’s hot for the guy. They introduce themselves and she comments on his entrance before rushing back to work. They talk about the hot mess.

In her hotel room, Britt yells at someone on a call to delete the gif. She’s Chief of Staff at GH. She can’t have her image smeared this day. “Yes. I meant co-Chief,” she says and then blasts them that if they don’t find a way to get rid of it, they could both lose their jobs.

She calls someone and tries to make amends.

At Sasha’s new apartment, Gladys eats cookies while Sasha snipes that those were for the support staff at work. She’ll get more. When Gladys offers to go along, Sasha blows up and refuses.

Sasha says she can’t protect her from her addiction. She has to want to stay clean and she does. Gladys just wants to act as back up but Sasha refuses. A package arrives and Sasha opens it to find baby shoes.

She starts to cry. She bought them while she was pregnant and they were back ordered. Gladys offers to return them. Brook Lynn arrives and comforts Sasha who shows her the shoes for Liam.

She calms down and Brook Lynn wants to talk business. Lucy heard from Home and Heart Shopping Channel and they want to give Deception an hour slot. Sasha’s happy as they detail how it’ll go down.

Gladys is thrilled but Sasha looks worried. Her hands shake and she excuses herself to the bathroom, where she takes a few breaths and looks rough. As Brook Lynn and Gladys chat, Gladys thinks she should go check on Sasha.

Brook Lynn’s suspicious as to why and confronts her. Sasha returns and the meeting begins.

Back poolside, Britt appears in dark sunglasses and snipes at Cody for slamming into her. She wonders why he isn’t in jail but he did nothing wrong.

Since Cody forgot his money, Brad offers to pay the bill. “Just put it on Selena Wu’s account.”

Britt drags him away. She doesn’t like the meme he created and that he’s throwing around Selena’s name. Brad says Cody approached him when Brook Lynn was with him. He’s showing hospitality.

He reminds her that Cody didn’t get into the pool on purpose. She has another meltdown about it, thinking he should be in jail. He says he was in the wrong sending the meme, even though he was “lubricated.” He’s sorry.

He thinks something else is going on with her and he’s worried. He thought it was about Jason at first but thinks it’s something more. Cody interrupts and asks if she’s okay.

She tries to get rid of him and when he calls her Dr. Westbourne, she asks how he knew her name. He shows her the meme. She screams up and down at him and says she hasn’t sued him because she doesn’t want him hanging around until the court date. Cody can’t be held responsible for this and reminds her she wasn’t injured.

He goes and Britt calls Terry to apologize for all of the crazy calls. She disconnects and Cody returns. She admits this is ruining her life. He thinks she should sue.

Selena turns up and takes Brad away for their meeting. They talk about his job and she praises him while he admits he’s enjoying it. She’s impressed. He tells her he’s ready for more so she drags him off to prove his dedication now.

Dex and Brando arrive at Sonny’s office and Brando spells out what Dex was doing at the stables with Michael. Sonny becomes angry and shouts that if Dex touches one of his kids, “I’ll kill you myself.” Dex gets it.

He leaves the area while Brando explains he brought Dex to him because of Michael’s attitude rubbing him the wrong way. Sonny appreciates all he does for the family.

He tells Brando to go home to his beautiful wife. Once he’s gone, Sonny tells Dex that when he gives him an order, he should do what he wants. “Nothing less, nothing more.” Dex refuses.

He thinks Sonny wants someone to anticipate problems. Sonny argues that he hasn’t earned his trust. Dex apologizes for what happened today. He wanted to impress him.

Sonny appreciates the enthusiasm but tells him to back off and listen to him. “Obey my orders.” Dex goes and Dante appears and relays that Dex will follow orders now.

Back at home, Sasha is about to take some pills when Gladys slaps them out of her hands. Brando arrives and sees the mess.

Dex meets Michael in private and Michael says it was wrong of him to show up like that at the stable. His family is off limits. Dex says, “Okay, Boss, but it’s ironic since you hired me to take down your father.”