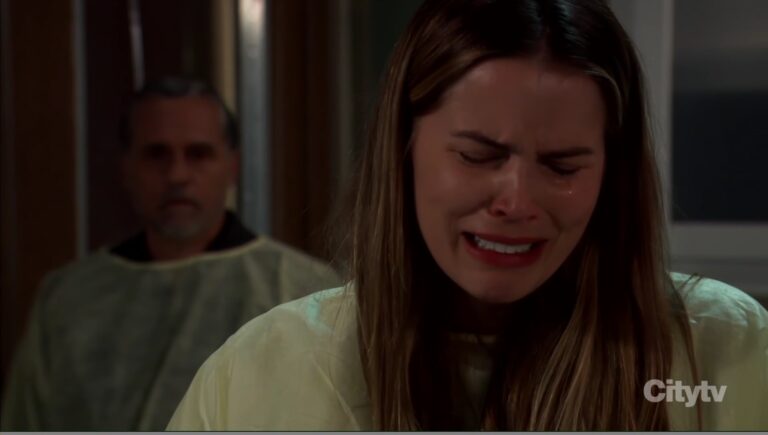 SoapsSpoilers’ General Hospital recap for the Thursday, December 16, 2021 episode. Today, Chase and Brook Lynn are locked in the sauna, Sasha can’t say goodbye to her son, Carly vents to Olivia about Nina, and Curtis demands answers from Marshall. We also have Wednesday’s GH recap where Britt reunited with Brad and Brook Lynn called Willow a hypocrite.

At the gym, Brook Lynn and Chase get locked into the sauna. She flaps her coat and complains about how hot it is. As he tries to shove the door open, his towel falls off. Her jaw drops. He asks her to turn around but she feels better now that she’s seen everything. Neither of them have their phones and pounding on the door doesn’t help. He encourages her to strip down so they will be on an even playing field.

They start bickering about her name being dragged through the mud. She insists she tries to do good, but can’t pretend it comes naturally. All she’s getting for trying to protect her family is shame and grief. Nothing is more important than protecting the baby. He says her sacrifice is very brave. “I see you Brook Lynn,” he tells her. They share a close moment but are interrupted by the janitor. He tells them the hot water is out so he hopes they like cold showers. Brook Lynn runs out.

Curtis is annoyed when he drops by the gym to hit the bag with TJ and Marshall is already there. TJ invited him. Curtis demands to know why he let them believe he was dead and asks where he’s been for forty years. His father won’t make excuses for his absence. The past can never be made right but they can focus on building a future together.

After Curtis sends his father away, TJ punches the bag and complains this isn’t fair. Curtis asks him to let him check up on his father. If things are okay, he won’t stand in the way of them having a relationship. If they aren’t, there’s no way he’s letting that man near his family.

Alexis and Harmony walk the Christmas market in Rice Plaza. Alexis doesn’t know why she wants to be friends since she endlessly drops her emotional baggage on her. The former lawyer explains that she took her lumps but doesn’t feel like her redemption was earned.

They sit on a bench and Harmony reminds her that she took a deal and still feels like she hasn’t been purified. Alexis is sure everyone thinks they are nuts but Harmony doesn’t. She invites Harmony over to her place but then remembers Kristina was a DOD victim. Harmony suggests that prison friendships should stay there. “have a good life and take care of yourself,” she says, walking off.

Portia approaches Stella at the Metro Court. She’s distracted and the doctor guesses it must be by something important. Not really explaining, Stella alludes to the problems Curtis is facing. They talk Marshall but Stella isn’t eager to say much.

Olivia and Carly catch up by the bar. She’s sure Carly can’t wait to see Nina go down for what she did to Sonny. Carly admits he can’t see Nina without wanting to throttle her. She’s trying to honor Sonny’s wishes and leave things alone. Her friend laughs and points out that’s not in her nature. She doesn’t bottle things up like Sonny. Carly flashes back to telling Jason she loved him. She claims she’s gotten better at pushing down her feelings and won’t crack so long as Nina stays away.

Finn jogs over to Liz at General Hospital. They’ve both been thinking about each other. Coyly, they talk about their kiss. He asks what she wants. Liz isn’t sure what to do. Franco only died a year ago and she thinks if she starts dating, it needs to be casual. Dating Finn would be something serious.

“What would be so bad about that?” he asks, telling her he doesn’t want anything frivolous, especially for Violet’s sake. Seeing her reluctance, he says it’s too soon and asks her to forgive him for pressuring her. She wants to be ready. She cares about him. The doctor feels the same way and his world is better for having her in it. Whenever she is ready to see where this could go, he’ll be ready.

In Sasha’s room, she tells Brando that she can’t go to the NICU to say goodbye to their son. Not now, and not ever. He doesn’t want to do it either. She insists their son is alive as long as his heart is beating. Brando says they need to think about what’s best for him. She can’t consider this and walks out in tears.

Gladys meets Sonny by the nurses’ station. Nina is there and there is tension between the women. Gladys explains the baby’s condition and bursts into tears. Sonny holds her and stares over at Nina. Brando joins them, explaining that Sasha walked away. He doesn’t know what to do. Sonny agrees she shouldn’t be alone and leaves to find her. Distraught, Brando admits to his mom that he doesn’t know what to do.

Gladys sits with her son. She explains if he wants to keep the baby on a ventilator, they need to decide now. He protests as she walks away to find Sasha. Nina keeps him back and he wonders if Sasha is right not to give up hope. After all, Nina was in longterm care for years. She says they aren’t comparable situations. Nina can’t give him hope, but promises that everyone will be there for them no matter what decision they make.

Sasha is with her son in the NICU. She weeps as she tells him she believe she can feel her now and know that she’s there. “You are not alone in the world, Liam,” she sobs, reaching in to hold his hand. Sonny enters. He’s not there to tell her she’s being selfish. He knows how hard it is to lose someone you love.

Inching closer, he tells her how beautiful her son is. Sonny is sure that Liam knows she is there. Love is powerful. He’s sure his father knew he was there at the end. They had a complicated relationship but it was good in the final years. In the end, his father accepted what his illness meant before he could. Sasha says he was lucky for that time. Her baby hasn’t even opened his eyes to look at her. She can’t accept this when other people get miracles. With difficulty, he tells her how hard it was to decide whether prolonging his dad’s life was what was best for him. He can’t tell her what the right thing to do is.

Gladys interrupts to say that Dr. Fleming is eager for arrangements to be made. After Sasha leaves to find Brando, Gladys tells Sonny he was wrong. She knows he made the right decision about Mike and he should never forget it. He thanks her. “Would it kill you to give me some privacy?” she asks. Left alone, she prays for her grandson.

Sonny returns to the nurses’ station and sees Nina comforting Brando. After Brando walks away, Sonny approaches Nina. He tells her about how his father appeared to him when he was dying in the woods. It may be no coincidence that his name was Mike when he was in Nixon Falls. She says the man he was there was real. He was a man his dad would be proud of. Carly and Olivia arrive and glare.

Sasha and Brando meet in her room. She breaks into tears.

Down the hall, Curtis bumps into Portia. They agree nothing Marshall says can excuse what he did.

Marshall meets Stella at Perks. She tells him it’s time they put all their cards on the table.