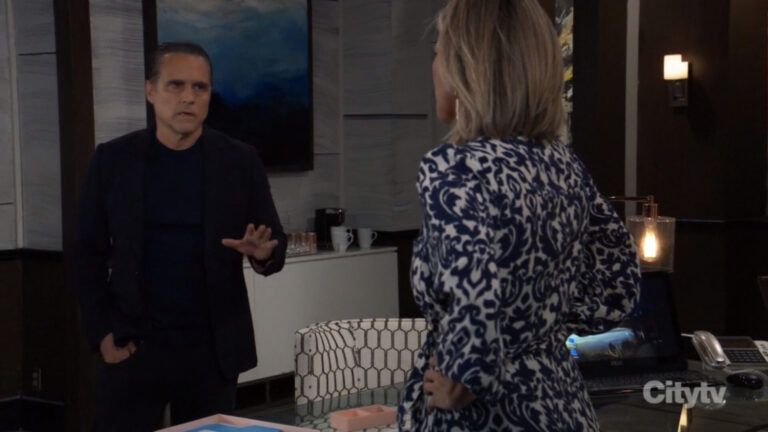 General Hospital recap for Tuesday, June 14, 2022. In today’s GH episode, Maxie goes camping with Austin, Cody turns down Dante’s offer of help, Joss and Trina get an idea of where to search for clues, and Nina catches up with Britt.

We also have Monday’s GH recap where Carly bailed out Michael and Drew and Esme reassured Ryan.

Carly takes Sonny to her office to talk about the kids. When he mentions that Michael says he threw away his relationship with his children, she agrees.

She wants to talk about his rift with his son. Sonny doesn’t see what he can say or do to change it. Carly worries that his rivals will go after Michael if they suspect he’s no longer under Sonny’s protection.

Sonny insists that he loves his son. If that’s true, she doesn’t understand how he could have done what he did in court. His son was viciously attacked and he consoled the woman who initiated it.

The man she married five times would have never done that. Whoever he is now, he’s a stranger to her. He had a family who adored him and he threw it away.

Sonny accuses her of pushing him away and punishing him. It was wrong of him to sleep with Nina and he’s sorry he hurt her, but she gave up on them. Carly insists she didn’t and he was lying to her for months.

“And you wouldn’t know anything about lying?” he snaps, reminding her she’d moved on with his best friend. She insists that never would have happened if they’d know he was alive.

Nina may have lied to him but the connection was real. Now Michael is trying to tear him down and she is cheerleading for him. “You’re not keeping Donna from me, are you?” he asks.

She would never keep Donna from him, but that’s only for her sake. She’s their only connection and they have separate lives. He walks out.

On the patio, Cody tells Zelda that she hasn’t paid him what he’s owed. As they bicker about it, Dante and Sam interrupt. Zelda claims Cody is trying to extort her. Dante gets her to agree to drop this if they get Cody out of her hair.

Nina and Britt meet at The Savoy. Nina admits that she almost left Port Charles. Britt is relieved she didn’t. She would have missed her.

Nina admits that Sonny convinced her to stay and she is still determined to prove she has a place in Wiley’s life.

The doctor worries she could be setting herself up for disappointment. She needs to give Michael and Willow time to come around but at least she still has James. Nina has realized she still has a lot left. “Including Sonny?” Britt asks.

Dante and Sam brings Cody to the club. As they get a table, Cody glares over at Britt. His friend asks him if he’s in trouble. Cody insists he has no trouble, just lives paycheck to paycheck.

The cop offers to loan him money. His friend doesn’t want to owe him. Sam joins them and Cody repeats that he is not in trouble and has plans for his future. He’s saving up for his dream: a working ranch.

Britt keeps getting texts from Brad but refuses to check them. She explains Brad is the reason she’s a meme. They toast to making him suffer.

When Britt goes to the bar, Cody saddles up and asks if she’ll buy him a drink. That won’t happen. He tries prompting her to sue Society Set-ups. She’s not taking the bait and tells him to go after them himself.

Returning to Nina, Britt tells her she just wants to go to bed and sleep for a week.

Meanwhile, Cody congratulates Dante on his job and relationship. He has to leave to catch a bus and take care of something on the way. After he exits, Dante tells Sam she has no idea about that guy.

Britt comes over and tells them Cody is second rate con artist. After she heads out, Sonny stumbles in and asks Nina what she’s doing tonight. “Stay with me, tonight?” he asks.

Joss and Trina arrive outside Kelly’s. Cam calls to talk about PCU deciding against Trina. Joss says they have a plan to deal with it. He informs her that he left for Pautauk. She’s sure that will be good for his family. Cam hates pretending everything is okay while his mom is in Shadybrooke.

They head inside. Joss worries that she and Cam still aren’t in-synch. When Joss spots Spinelli, she says they are going to get all the help they need. Once he joins them, they ask him if he has found anything to connect Esme to the evidence.

He’s tried but came up empty. Even the serial number on the phone can’t be tracked. Spinelli urges them not to go to the bar where you would buy a hot phone. As soon as he leaves, they look up the bar and head out.

They call Carly and tell her they are going out with friends and then go into the bar.

Cody sneaks into the Metro Court and follows Zelda to a hotel room, where she joins Spinelli.

In the woods by Pautauk, Maxie shows up, much to Austin’s surprise. She tells the doctor that she is a volunteer with the PC Pioneers.

He thought she wasn’t ready to come back there. She’s not, but she’s sure there are enough distractions to handle it. He helps her put up her tank and she recalls going camping with her sister.

Maxie impresses him by putting the tent up. She’s shocked that he only brought a bed roll and like to sleep under the stars. He also brought his dad’s old guidebook. It lets him feel like he is still with him.

She’s glad that she’s there. They hold hands. Later, PC Pioneer Wyatt finds her toiletries bag by her car and brings it to her.

Finn makes camp with his dad and the kids. He spots Cam moping around. The teen tells him that coming was a mistake. He vents about what’s happening to Trina and then stomps off. Finn returns to his father, who encourages him to try to talk to Cam again. The doctor has a better idea.

He sends his father to speak to Cam. Since he’s a college professor, he can answer his questions about what the Title 9 investigation means. That helps a lot.

Wyatt comes over and chats with Finn. He invites him over for the singing tonight.

Later, the kids gather around the fire and Gregory reassures Finn that Cam will come around to accepting his help.

As Maxie and Austin joke around about the sticks she found to roast marshmallows with, someone watches them from a bush.