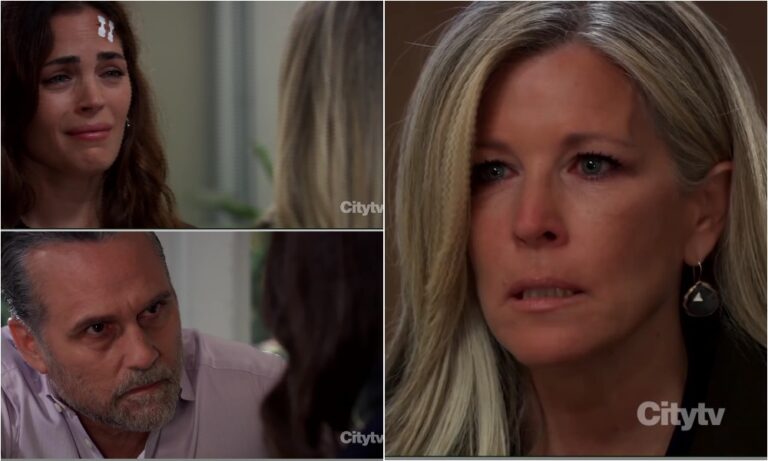 SoapsSpoilers’ first General Hospital recap for Monday, November 29, 2021 episode. Recaps go live at approximately 3:00 PM EST. GH wasn’t on Friday due to sports coverage. Today, Sam reacts to Drew showing up at her door, Nina and Phyllis commiserate over having a difficult Thanksgiving, and Brook Lynn makes a big reveal.

Sam sees Drew at the door. “Drew?” He’s sorry to show up like this but she never returned his call. Sam embraces him and asks how he is. He heads inside and tells her he’s alive and had help. Scout and Dante appear and Drew’s upset when Scout doesn’t recognize him. Dante explains who he is and Drew says they have nothing but time. They’ll get to know each other. She nods. He gives her a unicorn and she happily goes off to show the boys.

Ned refuses to let Chase into the Quartermaine estate. Brook Lynn tries to calm him down. Monica asks Ned and Brook Lynn where their manners are. “Invite the man in. He’s a guest.” Olivia wanders in after him and asks if they were born in a barn. The door closes and Brook Lynn calls Chase family. Everyone looks surprised. They learn Valentin isn’t Bailey’s father. Chase is. Monica isn’t shocked. Chase says he’s not going anywhere.

He’s planning on being the best father. He holds out the pie to Olivia. Valentin pokes his head in. “That didn’t take long. Out with the old and in with the new, right?” Olivia knows how much he loved Bailey. “I’ll get over it,” Valentin says.

He says he filed a motion nullifying their agreement. Her ELQ shares are now his, which cements his position as CEO of ELQ. “Happy Thanksgiving,” Valentin says, lifting a drink.

Once alone with Valentin, Monica thinks revenge can be sweet for the moment, but it won’t make Bailey his. Everyone returns. Thanksgiving dinner is ruined. Valentin shrugs and goads Brook Lynn. Chase can’t take it anymore and slugs him in the face. Valentin goes down.

From the hospital, Portia calls and leaves a message to ask Curtis to her place for Thanksgiving. Liz calls her superwoman but Portia has hired a caterer. Liz can’t wait to celebrate with everyone. She gets on the elevator and gets out to find Carly directing some men how to cook the Thanksgiving feast. They talk about how Cameron wants to be with Joss and they agree they’ve a lot to be grateful for. Liz goes and Britt walks up.

Upon seeing Carly, she takes off. Carly goes after her and assumes she and Jason had a great adventure. She can’t wait for Jason to tell her all about it. Nearby, Phyllis finds Nina and they discuss their Thanksgiving plans. They both admit they’re having a tough time and clasp hands. Phyllis gives her a pep talk about good people doing bad things. Nina feels terrible. Phyllis says taking responsibility is the road to redemption. Nina laughs. They see Portia and ask if they can go to Thanksgiving dinner. Portia agrees.

Carly’s thrilled that Peter’s captured and taken into custody. “That’s long overdue,” she says, glad everyone is safe. Britt’s eyes are filled with tears as Carly asks her this. Carly asks about Jason and Britt cries. Carly demands she tell her. “Say it!” She yells. Britt shakes her head. “I don’t want to.” Carly yells some more and Britt finally says, “Jason’s gone.” She says fifty tonnes of earth came down on him. Carly yells that Jason beat the odds before.

Britt says not this time. She breaks into more tears. He’s not coming back. “Because of you,” Carly sneers. She tells him Jason had feelings for Britt and “look what it cost him.” She wishes Jason never met her.

At the chapel, TJ and Marshall talk about how he’s being rejected. TJ says if he’s hustling, Curtis spotted it a mile away. Marshall denies that and apologizes for faking the pain in his side. He regrets everything. he should have done things differently.

He keeps talking and finally TJ asks what he wants. “To be part of the Ashford family.”

He was finally able to talk to Curtis but did it all wrong and isn’t sure what to do about it. He knows he has to figure it out on his own. It isn’t fair to TJ. TJ asks who TJ is to him. “He’s my son,” Marshall admits. He says it feels good to say he’s TJ’s grandfather. He hopes he can accept him. TJ shakes his hand, but says nothing. Curtis walks in and asks what the hell he thinks hes doing.

Curtis tells TJ to leave. Once he’s gone, Curtis asks Marshall to stop calling him ‘son’. He blew it and there’s no going back. He abandoned him and now they’re done. Meanwhile, TJ finds Portia and tells her what’s going on in the chapel. Later, TJ returns and Curtis lets TJ know he doesn’t trust Marshall and doesn’t think TJ should. TJ hears him.

Anna goes to Sonny at home and makes small talk. He can see she’s there for a reason and asks her to come out with it. She explains there was no plane crash, that Peter’s in custody and Victor cut a deal. Britt and Obrecht are home. Sonny says, “Jason?” It’s obvious by Anna’s expression that he’s dead. Sonny tears up as he stares at her, dumbfounded. Anna calls it unfair. Sonny worries about Carly finding out. Anna’s dreading telling Robin. She cries.

Once home alone, Valentin drinks as he stares at Bailey’s photo, sadly.

Carly arrives home, sobbing. She can’t go inside so sits down. Sonny sees her and watches from the window.

Curtis gets a happy surprise when he arrives home. Everyone brought the Thanksgiving celebration to him since he wasn’t up for going to their place.  There are cheers and hugs all around.

Monica answers the door, puzzled, seeing pizza through the window. “I didn’t even call for pizza,” she mutters. She opens the door to Drew. She smiles widely.