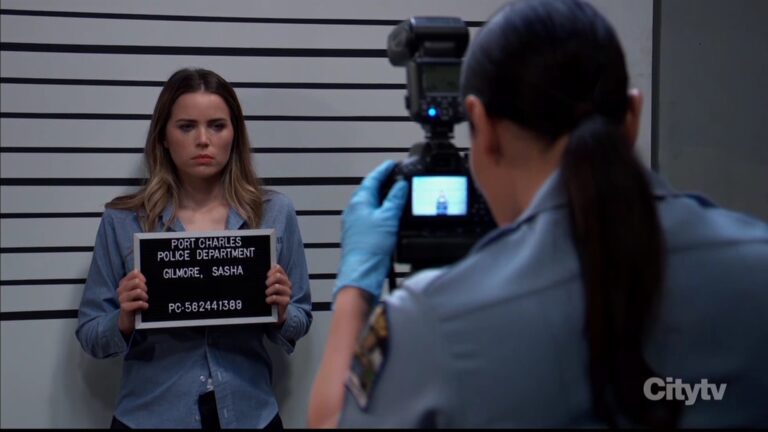 General Hospital recap for Thursday, August 4, 2022. In today’s GH episode, Joss vents to Carly about Cam, Sonny gives Dex a test, and the jury is tampered with.

We also have Wednesday’s GH recap where Ava had a request for Sonny, Sasha caught Sienna trying to record her confession for Smoltz, and Nikolas told Spencer Esme is gone.

In his office, Sonny talks to Brick over the phone and explains he has a job to test Dex. Dex is shown in. Sonny tells him he’s demonstrated that he’s capable and needs to test that to see if he’s ready for greater responsibility.

Dex is eager to do whatever it takes. Sonny hands him a photo of a guy named Beckett Reid. He’s the foreman of the jury and he wants pressure put on him to keep Trina out of prison.

When Dex asks why, his boss reminds him it’s not his job to ask. All the same, he says Trina is a good girl and he’s righting a wrong.

Carly joins her daughter at Kelly’s she notices Cam is not there. Joss explains that he lied to her and she hates it.

She tells her mom that Spencer finally came through for them and was only pretending to support Esme while trying to find evidence against her. He told Cam and he kept this from her.

Joss sensed that something was off and now she knows why. It was dumb of Cam to stay silent in all this. Spencer’s plan never had a chance of succeeding.

They go back to venting about Sonny. Carly claims she’s over it. Joss can’t turn off her resentment. Her mom encourages her to let it go for her own sake.

Dex finds Reid sitting outside of Kelly’s and threatens him. Joss catches them together and recognized Reid as being on Trina’s jury.

Reid scurries off and Joss starts lecturing Dex. She wonders if Sonny sent him. He won’t say anything.

Joss returns to her mom inside and tells her what she just saw. She’s surprised he would send someone to influence the jury.

Her mom tells her it’s not right for Trina to go to prison either. Joss allows Sonny may have tried to do something good illegally and there’s nothing she can do about it.

Dex returns to Sonny’s office and tells him he delivered the message. Sonny sends him home. One of his men informs him that he watched Dex the whole time and the story matches up.

Dex exits, calling someone and telling them he wants to re-negotiate their deal.

In the Metro Court garage, Sienna joins Smoltz in his car. She failed so he thinks she should try again.

Sasha storms over to them and demands to know why they are setting her up. Leaping out of his car, he asks when she started using again.

Sienna gets between them and Sasha goes into the corner to weep. Sienna lectures him for being insensitive. Sasha flips and starts smashing in his windshield with a pole.

Sienna runs away and Brando arrives, yelling at his wife to stop.

Portia finds TJ and Curtis discussing the trial at General Hospital. She tells them today was one surprise after another and fills them in about Spencer’s confession.

She’s having a hard time thinking about how her daughter kept this quiet. The ADA poked holes in his testimony.

Curtis explains that the doctors are trying to get Oz out of the coma. Sobbing, she worries about the jury going into deliberation. Their only hope is in a coma or Esme.

Sensing they know something, she asks what’s going on. They take her into her office and explain that they can drug Oz to make him wake up faster.

She says they’ve lost their minds. This is denying Oz’s medical needs and this is unethical. Curtis says they need to take drastic measures.

Portia tells them this is insane. He tells her that there is more evidence that Esme drugged Trina and this is the only way to get to it. The doctor tells them this could kill Oz or cause cognitive impairment. Plus, TJ would be violating his oath.

She won’t let them take this gamble and makes TJ promise not to do that. But she’ll never forget that he was willing to risk everything for her baby girl.

Once he leaves, Portia tells Curtis there is another way. He’s surprised she’s shutting this down and guesses she’s going to wake Oz up herself.

She admits it and will do it alone. He thinks it’s like she’s asking to be caught. Sobbing, Portia says she signed up for this the moment her daughter was born.

He’s impressed by how fierce she is being, but this is their family and they are doing it together. “How can I say ‘no’ to that?” she asks.

At the PCPD, Dante thanks Jordan again for considering him for the undercover job. He hopes that doesn’t mean he won’t be considered for such opportunities in the future.

The cop didn’t want to upend his son’s life right now. She says this shouldn’t derail his advancement and she respects his choice to stay local.

Jordan admits that when she went undercover, it caused friction with her son. If she could go back, she’s not sure she would have made the same choice.

Her understanding means a lot to him. She’ll keep an eye out for assignments that won’t take him far. There’s a call about an altercation at the Metro Court.

Back in the parking garage, once Brando has Sasha in his arms, Smoltz giddily gabs about how he is going to publicize this story.

Dante arrives with the other cops and demands to know what’s going on. Brando can’t explain. Smoltz says he has what happened recorded and is pressing charges.

Dante tells him to take a look at her. Clearly she’s going through something. Smoltz isn’t backing down.

When Dante turns to Brando, he explains that he would like to let them go but he can’t.

Dante brings Sasha and Brando to the PCPD. Jordan pops up and Brando complains his wife shouldn’t be there.

Dante takes Sasha into the interrogation room and tells her to get a lawyer. He offers to help. Staring, she says she couldn’t stand it anymore.

When the cop returns to Jordan and Brando, he tells them that Smoltz has video evidence and they have to book her. Jordan says she will have to stay until arraignment tomorrow. Brando doesn’t think she will make it.

Brando calls Sonny and fills him in on what’s happened. He doesn’t know how to help his wife. Sonny offers to come over but Brando doesn’t want to make things worse.

Brando tells them this is a mental health issue and needs professional help. The longer she is locked up, the worse it will be. As he begs, she’s booked.

When Sasha is brought out, her husband runs to her and tells her that he will get her out.