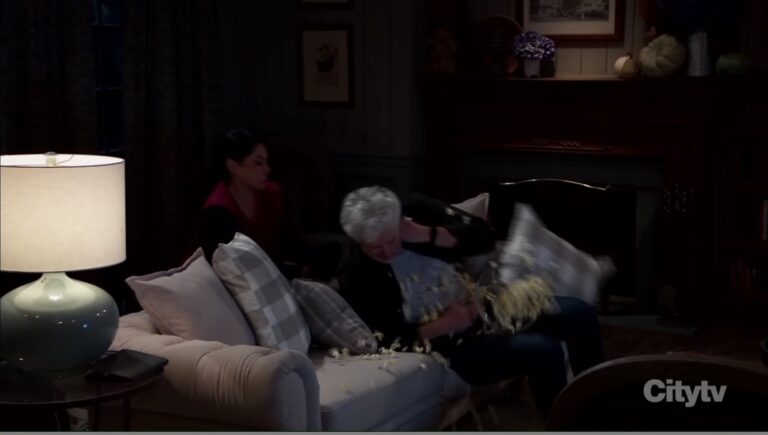 SoapsSpoilers’ General Hospital recap for Wednesday, December 8, 2021 episode Martin talks Laura out of taking off from the safe house, Gladys learns what’s wrong with Liam, and Peter threatens Sonny. Recaps go live at approximately 3:00 PM EST. We also have Monday’s GH recap where Willow confronted Nina about what happened between her and Sonny in Nixon Falls.

At the safe house, Martin tries to stop Laura from making a run for it. He threatens to go to Agent Silva. It’s too dangerous. Laura muses that she misses her family. They hug. He’s sorry. Outside, Silva tells the fake maid that he checked on her ID and was fine with her cleaning. Martin opens the door to give Silva cake and Silva tells him to get back inside.

The “maid” pretends she’s not watching the entire exchange. Later, Laura asks if Martin thinks his issues with marriage stem from his daddy’s philandering ways. He agrees, but then if it wasn’t for him, he wouldn’t be with his beautiful sister. She admits he’s cheering her up. He puts in a holiday classic Christmas film.

“Oh no, not Christina Comes Home for Christmas,” she says. She can’t watch that. She loves it, but it reminds her too much of home and her kids, her grandkids… In the movie, Kristina gets to go home and she doesn’t. She can’t take it anymore and gets up to leave and Martin yells at her to hang on a little longer. She backs off and goes to have a bath while he sits with popcorn and begins his movie. The woman from outside appears at the door. Martin lets her in. They told him Nancy was sick. He appreciates her doing their laundry. She reaches into the laundry basket and takes out a rope and strangles Martin.

At the hospital, Carly hugs Gladys. She cries and says she doesn’t like the name Liam. Carly likes the name. Gladys thinks it’s such a lacklustre name. “Must be a millennial thing. Probably Sasha’s idea.” Carly’s eyes widen and she says nothing. Gladys talks about being a crappy mom. Meanwhile, Michael visits Brando as Sasha sleeps.

The men go outside into the hall and Sasha wakes up. She wants to see Michael, too. Brando wheels her out and she opens the present for Liam. They talk about their kids playing one day and discuss his namesake. Brando asks him and Willow to be the godparents. Michael’s psyched. He’s in. Later, Brando and Sasha head over to Gladys and she asks when her sweet grandson gets to come home. They tell her about the baby being deprived of oxygen and are overcome with emotion. Sasha calls her a good mother and knows it had to be hard to raise Brando on her own. Gladys vows to be with them to help care for their son.

Willow takes Nina into a room for privacy as she tells the blonde that she wishes she hadn’t heard a word. She reveals she heard Nina tell Sonny that she was in love with him. She realizes Carly was right, that she was toxic to her family. She asks if Nina and Sonny are having an affair.

Nina denies that. As soon as Sonny found out who she was, they ended it. Nothing happened. It was pure, just love. She fights tears. “And you’re not over it,” Willow realizes. Nina admits she found peace in Nixon Falls. She wanted to tell everyone about Sonny but she couldn’t turn her back on them.

Mike was so sweet and good and didn’t want to know who he was. “I tried to stop it, but then I fell in love with him.” Willow knows but what about Carly? Why haven’t they told her? Nina says it’s over. There’s no reason to. Nina asks if she’ll tell. She knows what she did was wrong but it’s over. “But is it?” Willow asks.

Nina says yes, and she respects that he’s with the woman he loves. They go around in circles. Willow finally admits she’s not sure what she’s going to do. She goes back to Carly and Michael and asks after Liam and Sasha. Michael says they’re hanging in there with worries about the baby’s health. Nina comes around the corner as Carly asks where she’s been. Nina hides as Michael tells Willow that he agreed to be Liam’s godparents on her behalf. She’s happy about that. Carly’s grateful.

Finn lets Maxie into his office. Is she there to tell him he’s wrong? He knows he shouldn’t have interfered with Valentin and Brook Lynn. Maxie says no. He tells her that he stuck Peter a few times while he was drawing blood. They laugh.

He explains that he told Peter he’d do anything to keep him from hurting her. She learns he threatened Finn. Finn says he mewed like a little kitty cat. Maxie admits she went to see him to prove to himself that she could stand up to him and show him she wasn’t afraid of him anymore.”How’d that go?” Finn asks. She explains. He tells her that he can turn the charm on by using “pretty words.” He seems certain that the two of them will be together. Finn says he mentioned fate and Finn doesn’t believe in that.

Maxie has concerns that he now sees Finn as a rival for her. Finn isn’t worried. He’s going to be Peter’s physician. Maxie worries. Finn tells her to chill. He talks about Brook Lynn being close to her. She asks him to stop talking about it and also to stop asking so many questions. She agrees to be friends with him.

Sonny visits Peter in jail. Peter asks how he got in. Sonny says some of the police hated him and some liked him but they all respected him. “You killed Jason, all rules go out the window. Everyone wants to see you pay. It looks like I’m gonna do the honors.”

He says everyone wants him gone and he has the power to make it happen. He caused that cave in. “You don’t deserve another breath,” Sonny yells. Peter taunts that he’s still breathing. If he kills him, Sonny’s little secret will come out. He talks about Sonny being too simple to know he was being duped by Nina.

Peter recorded it. He has a photo of their kiss locked away, “Ready to be opened upon my death,” the threatens. Sonny says Carly will find out when the time is right. This is bigger than  Nixon Falls. Peter asks what he’ll do — kill him now in a police station? Sonny says he’ll do it when Peter least expects it.

He’ll be in his cell and won’t give him mercy. They’ll tell him when it’s finished and Sonny says he’ll smile and everyone will be so happy that he’s done. “Especially Maxie.” He tell shim to have a nice life, whatever is left of it, before he goes.

Back at General Hospital, Maxie runs into Sonny. She asks what he’s going to do about Peter. “Are you gonna kill him?”