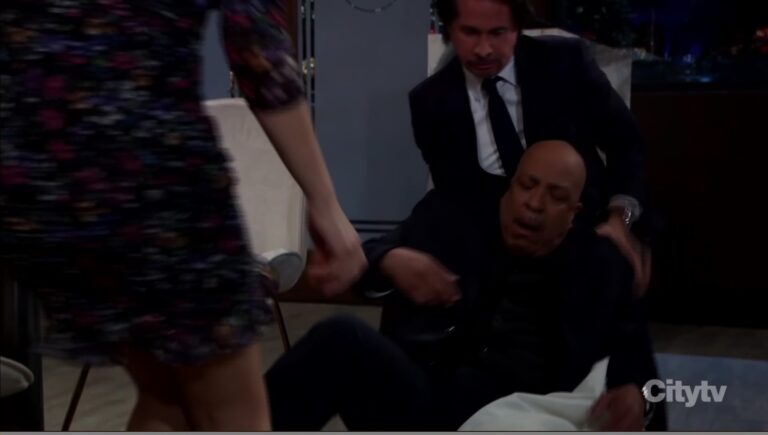 SoapsSpoilers’ General Hospital recap for the Tuesday, January 18, 2022 episode. Today, Finn and Liz finally have a date, Drew tries to explain Marshall’s position to Curtis, and Brook Lynn wants Chase out. We also have Monday’s GH recap where Britt encouraged Nina to take advantage of Sonny and Nina’s marital discord.

Curtis catches some guys selling drugs at The Savoy and escorts them out. He thinks about his father’s warnings as he wanders back to the bar. Drew arrives and Curtis tells him that his father has loosely filled him in on where he was all those years, but it’s only raised more questions.

Curtis tells Drew that things are great with Portia, but he’s worried about his father. He still can’t trust him since he won’t open up about what happened. Drew suggests that he might be evasive because he cares. Curtis doesn’t understand so his friend explains that if Marshall is in witness protection, saying anything puts him in danger. He’s already given Curtis the ultimate sign of trust. Although he can see his father’s intentions might be noble, this is still hard for him to accept. Drew assures him he has lots of time to figure it out.

TJ is working out at the gym when Brando strolls in. He thanks TJ for showing his concern when Liam passed, but he doesn’t need to pretend to be his friend again just because of that. They hit the bag until Brando stops and admits he’s distracted.

Brando tells him about watching his son being taken off the ventilator. Sasha doesn’t want to talk about it and is trying to act normal. “Maybe Sasha needs to griever privately,” TJ suggests. Brando is worried she’s not grieving at all and repressing grief is healthy. TJ suggests that he is projecting what he needs from Sasha onto her. Giving him a hug, Brando thanks him for the advice.

Sasha is at the yoga studio when Gladys plops herself down beside her. She babbles about the IPO. Sasha just wants to practice mindfulness. Gladys encourages her to open up about Liam before she cracks. “Everyone copes differently,” Sasha says. She walks out.

Maxie and Felicia avoid Gladys and settle at the opposite side of the studio. Felicia needs to stretch after the tense encounter she had with Peter. She’s sure he’s desperate to reunite with his daughter. That’s what Maxie is afraid of. They discuss how cruel Peter is, but Felicia admits he was right to attack her for letting her daughter down. Maxie tells her they’ve changed and she shouldn’t let Peter get her down.

Felicia admires how strong Maxie has been but her daughter tells her not to put her on a pedestal. She still refuses to return to the woods to retrace her steps on the night Louise disappeared. When Felicia starts rehashing the night, Maxie promptly walks off to get water.

Maxie bumps into Sasha and they vent about how people are always prodding them to face their feelings and talk about them. If they do that, they won’t be able to get out of bed in the morning. Maxie encourages her not to push Brando away. She will need him one day. As soon as Maxie walks off, Sasha gets a text from Brando, wanting to talk. She joins the yoga group for their session.

Dante and Finn help move Brook Lynn and Chase into Jax’s place. The co-parents begin bickering about space and how she occupies all of it. After some teasing, Brook Lynn insists this is only a practical arrangement. Chase reminds his brother he’s supposed to be on a date with Liz. Brook Lynn wishes him well and goes off to feed the baby.

Sitting down, Dante asks Chase what’s really going on between him and Brook Lynn. Given everything that’s happened, Dante wonders why he isn’t angry at her. He’s known her his whole life and deep down she’s a good person so he can see why he would have feelings for her. “No! Nothing can happen between us. There’s too much at stake!” Chase blurts. Standing in the doorway, Brook Lynn eavesdrops as Chase explains he’s moving in because it’s what’s best for Bailey given that her mother can’t be trusted.

Brook Lynn comes in and asks Dante to stay for dinner. He can’t and leaves them alone. Chase asks if she wants to start unpacking. She thinks he should go. They need to set boundaries. She reminds him they aren’t real co-parents and are only there to protect Bailey. As she digs into a box, she tells him to lead his own life. Confused, he leaves to work out.

At General Hospital, Portia and Terry admire how Liz looks for her date. The nurse admits she can’t shake the feeling that something bad will happen if she actually goes out with Finn. She tells them about the mysterious appearance of her ring in her locker. But maybe she did it herself and was just distracted. They wish her luck and usher her out.

Terry and Portia talk about their private lives. Terry hasn’t been able to find anyone who wants to take it slow or even have a conversation. Portia decides to set her up to a dating app with an anonymous profile. Pretty soon, she gets a match.

Marshall pulls out the chair for Epiphany when they arrive at The Grill. She insists that they split the check. It’s okay with him if she agrees to be the new singer for his band. She doesn’t want to get into that now. They toast and she tells him how much she loves being a nurse. The topic returns to her original intentions to become a doctor and how she was put off.

Liz enters and Epiphany introduces her to Marshall. After some teasing about Finn, she goes off her table. Moments later, the doctor joins her. They look at the wine list. She can’t handle drinking. However, after some awkward moments when he mentions her parents, she orders wine. She glosses over it and how much Franco used to help by distracting her. She’s trying not to live in the past. He hopes her future has him in it.

Epiphany tells Marshall that the nurses under her are her family. That’s why she would never turn back the clock on what she’s done. He wishes he could turn back the clock with Curtis. She mentions the son she lost and says you always think you have more time than you do. When she brings up Curtis, he starts having a heart attack.

Epiphany, Finn, and Liz take Marshall to the hospital. Portia calls Curtis and tells him he needs to come there immediately.