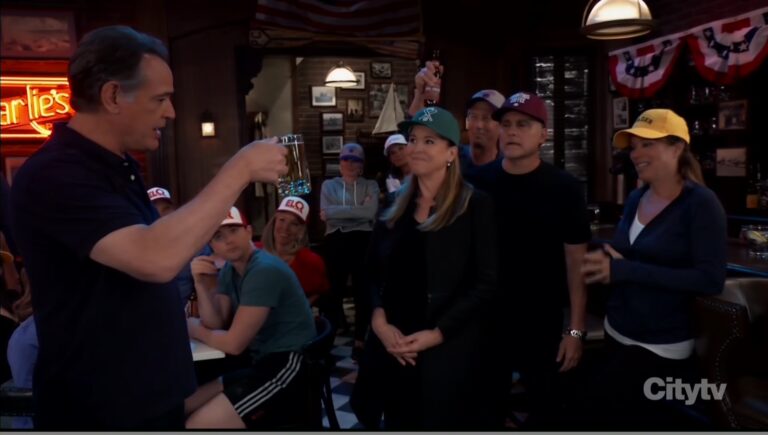 General Hospital recap for Wednesday, June 22, 2022. In today’s GH episode, Laura faces a recall and her friends band together to discover who is behind it, and Scott proposes to Liesl.

We also have Monday’s GH recap where Esme was barred from seeing Ryan and Laura was warned of catastrophe. *No episode aired on Tuesday due to ongoing news coverage.*

Laura parks at General Hospital. She tells herself that this is the place she has always felt safe and welcome and today will be no different, no matter what she’s facing.

When she steps off the elevator, she finds Portia quizzing Epiphany for the MCATS. She tells her she will be rooting for her. Portia reminds her that its the softball game tonight.

After Laura walks away, Britt remarks that the mayor seems very calm for a dead woman walking.

Violet sits with Sonny waiting for some medical attention. She’s itchy from poison oak. Finn chats with them until the mayor wanders by.

The men have seen the article on her in The Invader and know she has a lot on her plate. She assures them she’s got it and walks off. Sonny tells Finn that Laura can usually handle things but it doesn’t hurt to have a back-up plan.

Laura meets with Kevin in the hallway. She’s so nervous she feels sick. He assures her she is surrounded by people who love her and doesn’t need a tidal wave of votes.

They join Scott, Sam, Curtis, Carly, Alexis, Robert, and Mac. The lawyer announces they have all joined together to save her hide. Laura tells Mac that he will have to leave because this is a political issue and his job won’t allow his involvement.

Once he exits, they sit down and they criticise Alexis for running a letter from a group, the Friends of Port Charles, attacking Laura and calls to trigger a recall election. Alexis says they had the required amount of signatures and the right to voice their concerns.

The people around the table talk about what a great mayor Laura has been for them. Laura doesn’t think the DA should be getting involved in this. Scott is determined that they win over the hearts and minds of the townspeople. That’s not him.

They assign themselves to different projects and split up, leaving Scott with Laura. They flashback to their wedding. She’s touched by his loyalty but hopes it won’t get her into hot water with Liesl.

Scott recalls how he and Liesl distracted someone collecting signatures so they could copy their list. He shows her the names on the list. She’s shocked by who shows up on it.

Immediately, Laura heads down the hall to confront Bobbie, asking her how long she has waited to even the score. Bobbie assumes she is talking about softball. Laura shows her the petition.

Bobbie says she only signed a petition to save the whales. They flash back to fighting over Scott forty years ago. Bobbie points out that a lot of the signatures could have been faked.

She assures her that her real friends are on her side and she is one. Laura feels ashamed for accusing her. Bobbie repeats that she’s with her. They hug.

Laura goes to the patio and catches the Cassadines toasting to dominating the softball game today. She tells them they won’t dominate anything so long as she holds breath.

Victor wonders what’s curdled her cream this time. He insists he wouldn’t attack her anonymously, and besides that, it would unite his family against him.

Sonny and Curtis meet with Selina. She admits that she knows Brad was working on the committee to recall Laura. She put him in charge of it. Sonny says that Laura is a friend of his and he orders her to back off.

Curtis wants the names of her contacts so they can figure out who is pulling the strings. Once she gives them the information, they call Laura and warn her she won’t like where this is leading.

Selina assures Sonny she wouldn’t have given the group any help if she knew who was behind it.

Laura goes to Pentonville to visit Cyrus. “Sister, you read my letter?” he assumes. He admits he wrote the letter and didn’t sign it because he’s behind bars. However, he claims to only be an advisor of the group.

He points out how badly Port Charles has been run by her, how full it is of corruption and immorality. Her leadership has been filled with conflict and bloodshed. She reminds him he’s a convicted felon.

That sets him off and he lectures her to turn back to the path of righteousness. His sister asks where God was in his op ed attacking her. “I forgive you. Thank you for watching out for Port Charles,” she says. He drops the phone weeping, and she walks out.

Robert, Scott, Mac and Kevin sit at Kelly’s and debate what to do. They tease Scott about being with Liesl while trying to help Laura. That sounds like a recipe for trouble.

Liesl is disturbed when she arrives at the salon and fins Bobbie, Lucy, Anna, Felicia, and Laura getting pedicures for the softball game. Lucy and Bobbie taunt each other for stealing each other’s men.

Liesl refuses to be jealous of any woman given how ravishing she is. Scott interrupts the beautifications and drops to his knee in front of Liesl.

She’s everything to him. She puts the lieder in his hosen and he wants her to make him the happiest man on the planet. “With all my heart, I say no,” she says. She’s already his.

Lucy helps him stand up. Scott proposes again. Liesl tells him marriage is for other fools. They kiss.

At the Quartermaine estate, Ned and Michael are getting ready for the softball game. Carly and Sam storm in and accuse Ned of being behind the Friends of Port Charles. Ned says he has no interest in politics anymore.

Olivia backs this up and so does Michael. She insists that while the family may have its foibles, it is also supportive.

Curtis goes to see Portia at the hospital. He informs her that Cyrus has been sent back to Pentonville.

Finn, Violet, and Chase get her medicine and take off. Britt and Epiphany talk about all the great things that the hospital does for the community.

Maxie and Laura go to the mental hospital to visit Liz. Maxie explains Deception wanted to wish her a speedy recovery so they brought her free cosmetics. Laura tells her how much her kids are missing her.

Maxie asks if she might recover better around her kids. Liz is sure they have lots of friends and family. Laura tells her how loved she is. Liz will try to focus on that. Her family needs a hand right now and one day it will be her turn to step up for someone else’s.

Laura goes to Charlie’s. The different softball teams file in and hug her, telling her to hang in. She tells her friends that this might end up being one of her best days. She’s ready to publish her rebuttal.

Laura writes that the town isn’t all bad. There is plenty of good, like the politeness of the police, the hospital staff, and the mom and pop establishments. She’s proud to be a citizen of Port Charles. It isn’t just a town, it’s a family.

Kevin toasts to his wife as a beacon of light. Bobbie tells her she will always be her sister-in-law. They hug and everyone cheers. Laura looks forward to how they will all continue to grow.