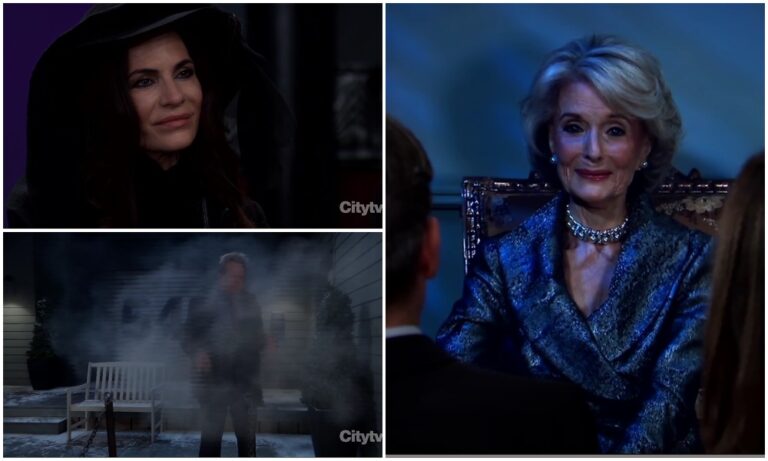 SoapsSpoilers’ General Hospital recap for the Thursday, January 21, 2022 episode. Today, family and friends gather for Luke Spencer’s memorial. We also have Wednesday’s GH recap where Anna had doubts about Valentin and Franco’s studio was burned, while Maxie visited Pautauk.

Curtis meets Laura at the Haunted Star for Luke Spencer’s memorial. Curtis will be there for her, knowing these can be rough. She’s grateful. Felicia and Anna arrive. Laura tells them this is Tracy’s event. Anna keeps expecting Luke to show up. They call him a legend.

Laura tells them to help themselves to a drink. She doesn’t know where Tracy is. Ava and Nikolas wander in. Lucky can’t make it home because there was an outbreak of Cholera. He’d have to quarantine for two weeks. Tracy’s having another memorial for Ethan and Lucky in Amsterdam in a few weeks. Spencer turns up and Laura’s happy to see him. Esme’s at Spring Ridge and sends her regrets. Victor arrives and calls the group family, despite their differences. Laura tells him and his “bury doberman” to get out. Yohan is there for everyone, Victor tells them, since Luke still has enemies. Anna orders him out. He tells them to give Luke his best. Laura hopes he can tell him himself. “The sooner the better.” When he’s gone, Spencer starts in on his dad until Ava takes him away. Curtis asks if Laura’s okay. She needs fresh air so he takes her outside. Anna and Felicia think that Luke would have loved the drama today and maybe more so if someone had hit Victor Cassadine in his smug face.”

Alexis finds Tracy outside with Luke’s urn. They talk about Alexis’ reason for letting her out of jail being was for Luke, who was better off with her. She did it for herself and Tracy because she believes people deserve second chances. Tracy’s grateful. They decide to head inside for the memorial.

Dante finds Sonny at Charlie’s, ready to do a shot in memory of Luke. They talk about how important Luke was to them. He thinks he and Carly should be together when they say goodbye to her Uncle Luke. Dante reminds him that she wants space. Sonny argues.

They lost too much time. He rants that it’s over between him and Nina. Scotty and Robert turn up. Scott needs a few cocktails so he can crash the party at Haunted Star. “If anybody’s boohooing I don’t care.” He talks about his hatred of Sonny and Luke and thinks maybe he hates Sonny more.

He says this while right in the man’s face. Sonny tells Scott he owns this bar. “Nobody comes in here and insults Luke Spencer.” Dante asks Robert to take Scott to the memorial.

Scott refuses and Sonny shakes his had, laughing. He tells Dante to go on without him.

Sonny offers to buy the men drinks but Scotty refuses. “We buy our own drinks.” Sonny snaps that he thinks he scored a touchdown at Nina’s hearing. Scotty puts his finger on Sonny as they argue and Sonny snipes at him not to. “What are you gonna do?” Scott asks.

They sling insults and then Victor wanders in with his minion. He smirks at seeing “the mob boss versus the ambulance chaser.” Sonny and Scotty take offence and Scott thinks he hates Victor more than Sonny. Sonny nods and they team up to take Victor down. They go at him while Phyllis shouts at them to stop.

The men throw a few punches and break a few tables and finally, the fight is over and they start arguing about who will pay for the damage. Each wants to do it themselves.

Robert, Sonny, Scotty leave for the memorial when Sonny has second thoughts and wants to go  back in and beat on Victor some more. Dante tells him Carly’s waiting.

Inside, Victor cleans up with Phyllis and gets a drink. He talks about how Port Charles is in for a surprise and drinks to Luke.

Bobbie meets with Carly at the bar. She couldn’t get through this memorial without her at her side. Carly recalls Luke calling her Caroline, which reminded her of who she was and to never forget where she came from.

She asks how Bobbie’s doing. She says they’ll get through this. Carly wishes Lucas could be there. Bobbie doesn’t think he’s gotten over losing Wiley.

They talk about the past and how Bobbie wound up as a nurse. She thinks it happened because she knew her big brother had her back. They talk about Carly’s pain over Sonny and Nina.

Back on Haunted Star, everyone finds a big screen television and are confused when nobody admits to setting it up. They turn it on and Helena Cassadine comes on the screen. “Well. We meet again,” she says, smiling.

She tells them Luke Spencer followed her to the great beyond. She gloats that she always told him she’d have the last word and now she’s going to have it.

She always considered Luke a parvenu (he was wealthy but cheap and tawdry), though he fancied himself a diamond in the rough. Laura has had enough and pulls the plug on the TV.

Scott and Robert leave Sonny and Yohan on the pier to go on board the boat. Carly and Bobbie appear. Bobbie leaves Carly with Sonny. He asks her to say goodbye to Luke together and sends Yohan to the car.

She notices his hand is messed up. He explains what happened at Charlie’s. She worries it’s broken. When he tries to get her to hold his arm, she refuses and they step on to the boat.

On the boat, Tracy thanks everyone for coming to honor a man they all loved, or at least some of them loved him. She knows some hated him.

She’s a little overcome as she talks and says they’ll never forget him. She calls him cunning, cruel, caring and generous, though he was impossibly selfish. “He brought out the best and the worst in all of us.” She thinks he changed them.

Outside on the pier, Scott bellyaches about the past with Luke stealing his woman and he thinks he had the last laugh since Luke’s dead. Scott bitches, “So long, Spencer.” He takes a drink. Meanwhile, from Haunted Star, Tracy spreads Luke’s ashes.

Luke’s ashes fly right into Scotty’s face. He coughs and sputters. Tracy goes inside and has something to give to Laura. If it’s the Ice Princess, she says to throw it in the sea when she scatters Luke’s ashes.

Spencer admits he’d like to see it. Hold it. Tracy goes and Laura says not to consider it. On their way out, they run into Jennifer Smith (Holly Gagnier) and Laura gasps, while outside, Sonny holds Carly’s hand.