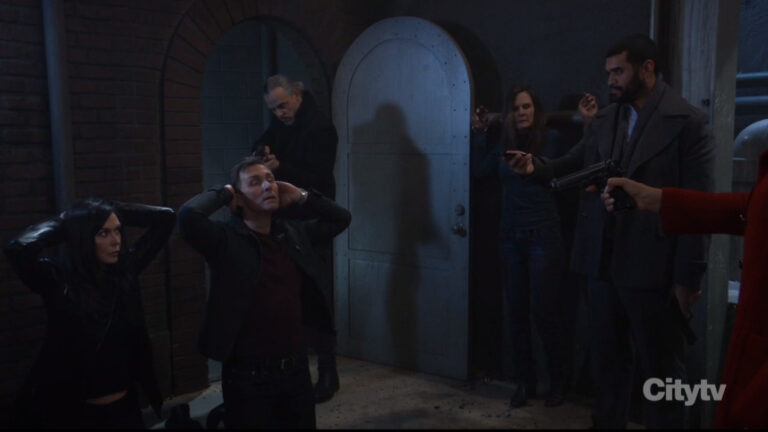 General Hospital recap for Wednesday, January 25, 2023. In today’s GH episode, all hell breaks loose as Renee pulls a gun, goons rush Lucy, Valentin and Anna and Anna blows up the catacombs as they make an escape. Meanwhile, Trina and Spencer agree to keep ‘dating’ and Joss gets advice from Carly.

We also have Monday’s GH recap where Laura encouraged Liz to make amends with her mom, Maxie and Sam talked about the hook, and Anna and Valentin entered the catacombs, where they found Lucy strung up.

Laura runs into Spencer and Trina outside Kelly’s.

She suggests they look out for Cam tonight. He needs a friend.

Spencer promises to and when she goes, Spence tells Trina Joss stabbed Cam in the back.

She asks what’s going on and they head inside where both Cam and Spencer tell her that Joss broke up with Cam and stated they were growing apart.

Cam doesn’t want to talk about it and shuts down, then lashes out, asking why they’re even together since Esme’s been caught.

He goes and they discuss Britt’s memorial service. Spencer groans, not sure he’s ready to say goodbye.

Trina offers to tag along. He’d like that. He smiles and says Cam’s right that there’s no reason to pretend anymore.

Trina thinks they should keep it up since they don’t know who the hook is yet. They agree to it.

She talks about how her parents don’t like it but that’s not going to stop her. They smile at one another.

Joss sits in her dorm room, unhappy as she flashes to her argument with Cam when Carly appears and asks what’s wrong.

Joss screwed up and embraces her mama. She lost Cameron as a friend.

She cries that they’ve known each other forever and she blew it.

She explains what went down, that she and Dex were together there at the dorm and that he answered the door shirtless.

Cam was there instead of the delivery guy. She sobs. Carly comforts her. She’s sorry.

Carly can see that she was starting to have feelings for Dex while she and Cam were growing apart.

Joss is also unhappy that she had to ask Cam not to say anything.

That doesn’t bother him but does it bother her? Joss claims she doesn’t know what she’s getting at. Carly says Jason liked the danger of working for Sonny and she liked that about him.

She knew he’d make her feel safe. Joss cries. That’s how Dex makes her feel. “Then you’re going down a really difficult road and need to be sure it’s what  you want.”

The mother and daughter are alike, Carly says. She’ll have to figure this out on her own, knowing she won’t listen to anyone.

Joss says she can’t go back on her feelings for Dex. They discuss Carly’s break up with Drew.

They agree they didn’t want to hurt others with their decisions but Joss thinks it’s better to tell the truth. It’s less painful than defending a lie. Carly wonders how her kid got so wise.

Wiley and Drew arm wrestle and Drew lets the kid win. He flashes to kissing Carly in Florida.

Olivia arrives and the kid calls her Mama Q. He asks where Annabelle is. She says Wiley tired him out. He’s invited to a slumber party at the main house.

Wiley’s thrilled and goes to get his things.

Meanwhile, they discuss Willow and he almost spills it about Nina being her mom.

Olivia knows he’s keeping something from her.

Drew spills that Carly knew Nina was Willow’s bio mother and kept it from everyone.

Olivia’s shocked. He goes on to say she sabotaged his search for Willow’s bio mom.

Olivia can see he’s dealing with heavy stuff. He says all that matters is Willow’s health.

Olivia knows his relationship with Carly matters and asks if it can survive.  He says he’s angry. He trusted her.

Olivia says they’re similar that they hate lies. It’s been a challenge for her to deal with the Quartermaines.

It’ll be the same with him and Carly. He sort of understands why Carly kept it to herself. Family is important to Carly who has come through for her many times, though they’ve been at each other’s throats before.

Drew cares for Carly but isn’t sure about a future. Later, once Olivia’s gone with Wiley, Carly shows up.

At Metro Court, Victor is on a call with someone about the accommodations, thinking she’s the one thing to bring his son back to him.

In the restaurant, Charlotte and Laura appear and ask Martin to dinner.

Charlotte goes to wash her hands and runs into Victor on his call while Martin is shocked that Laura spoke with Valentin at Christmas and told her he and Anna were searching for Valentin.

Meanwhile, Victor asks how she’s doing. Charlotte bitches at Victor that she’d do better if she knew where her father was.

She’s bitter and blames him but he cites that her father’s been doing this for ages.

Laura stops the conversation and hauls Charlotte to their table. Laura and Martin later tell Charlotte that her daddy will return to Port Charles.

To have faith. Laura goes to Victor and he tells her that Charlotte will come around if he wants to see her father again. 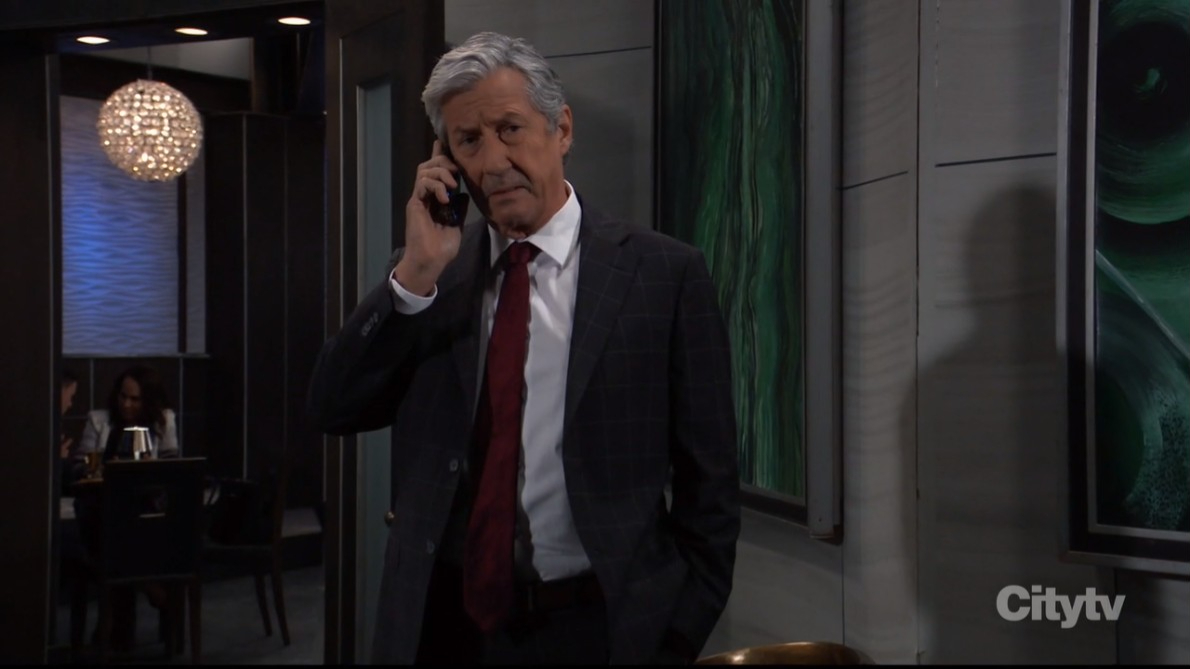 In the catacombs, Lucy is cuffed to a pipe and tries to communicate though she’s gagged.

She tries to tell Anna, Renee and Valentin something.

Renee can take them to another door but Valentin and Anna yank the grill off the wall instead as Renee purses her lips.

The duo breaks into the room and releases the gag on Lucy.

A gun appears in Renee’s hand and she tells them Lucy’s going nowhere.

At her behest, Jeane-Claude and Gavin appear with guns and get Valentin and Anna on their knees with their hands on their heads.

Renee speaks French, telling them she’s sorry but she had no choice.

Gabin calls Victor and puts him on speakerphone. “Valentin, Anna. How was the reunion? I’m sorry it was short-lived.”

Valentin calls his dad a coward to dispose of them while he’s not even in the country. Victor wouldn’t do that.

He’d never give up on him. He tells Gavin he knows where to take Lucy. “Get rid of Miss Devane.” Valentin yells that he’ll kill his father himself.

Anna clicks a button up her sleeve and something blows up. Everyone freaks out and Anna says that’ll be the C4 she planted in on the water main.  They break free and start kicking ass.

Lucy, Anna and Valentin escape. He doesn’t think she’s been more beautiful than when she punched Renee in the mouth. “How romantic,” she says.

Lucy pants and doesn’t want to go yet. She needs to call Marty. Anna says she can’t. Everyone thinks they’re all dead and they have to stay that way. Lucy shivers and gasps.