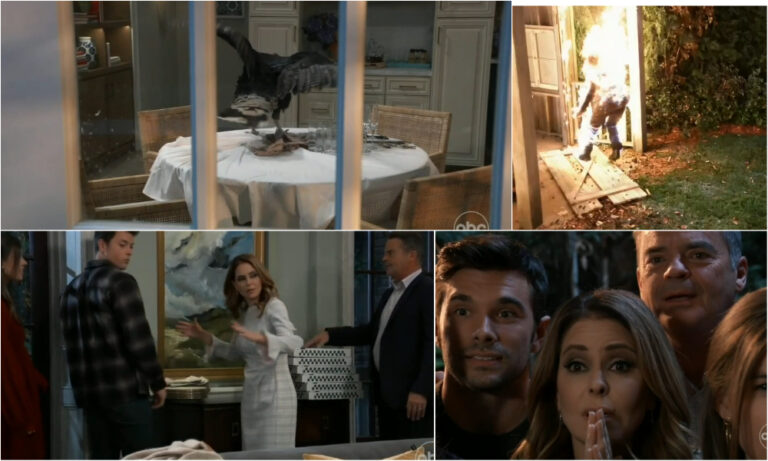 General Hospital recap for Tuesday, November 29, 2022. In today’s GH episode, Dante wonders why Sam has turned on Cody, Gladys is furious with Alexis, and Chase confronts Brook Lynn about the letter.

We also have Monday’s GH recap where Heather called Scott for help and Holly stole Laura’s car while being pursued by police.

At the Quartermaine estate, Drew tells Carly she’s smelling amazing. He wants to drag her out and kiss her until she can’t breathe. She’s down for that but Michael and Willow interrupt.

Joss is off working at a soup kitchen this year. They joke about Olivia’s plans not to serve pizza this year.

They notice it has been a year since Drew came back and broke the news about Jason.

Carly looks out the window and thinks of Jason. Drew tells her she’s had quite a year.

She wouldn’t have believed she could make it through the past year without Jason.

Drew points out she did and she’s thriving. Carly admits he’s played a role in that.

Chase arrives with wine and asks Brook Lynn if she has something for him.

She kisses him and he flashes back to Dante telling him about asking her for a letter.

“That’s it?” he asks. She tells him to keep his mind out of the gutter. They can get to the rest later.

They join the others. Brook Lynn notes that Chase punched Valentin on the holiday last year.

He reminds her that was when he lost his badge.

Chase adds he’s grateful for all she’s done for him but wants a second chance at his badge.

When she claims she wants what he wants, he asks if she means that.

He asks if there is something that she needs to tell him.

He accuses her of only supporting the life she wants for him, not the life he wants.

Then they talk about her baby and her birth parents.

Drew explains that Carly has offered to help out.

In the kitchen, Olivia is teaching Leo to fold napkins.

She lectures Ned when he starts eating the mashed potatoes.

She tells them that she has taken every precaution this year and it will go off exactly according to plan.

Olivia needs this Thanksgiving to be perfect.

A man wheels in the turkey. Olivia is shocked that it is still alive.

Liv is confused and outraged. She tries calling the chef from the Metro Court and offers him triple pay, but he refuses.

Ned and Michael offer to “ready” the bird.

Leo declares there will be no turkey today. He let him out.

Olivia’s jaw drops as the turkey walks around the house.

Leo runs around declaring the turkey is out and soon all the guests are standing on the patio watching the bird eat their meal.

They give Olivia credit for trying but this is the tradition.

Ned reminds everyone there is an easy fix: call Luigi’s.

Later, as Brook Lynn and Chase clean up, he asks if she was ever going to tell him about the CCRB letter that she never wrote.

In the other room, the pizzas arrive and Olivia reminds them they have to sing before they eat.

They sing and hug.

At the PCPD, Laura bickers with Ashby.

Jordan spots Alexis and walks over, asking for a reason not to arrest her.

Taking her into the interrogation room, she tells her she endangered their investigation by naming Esme as a suspect.

Alexis complains that she didn’t give her the payback she promised.

Alexis refuses to apologize and says she has a dinner to attend before exiting.

Meanwhile, Laura tells Robert they need to tolerate Ashby as long as she’s working for Victor.

With Mac, they look at maps and try to figure out where Holly disappeared to.

Across the room, Ashby sends a text when Laura interrupts her.

Felicia brings dinner for everyone and Mac announces that his men have detected signs that Holly could be at a trapper’s cabin near the border.

Mac, Robert, and Jordan take off.

Laura assures Felicia that she’s fine given what’s happened over the past 24 hours.

Holly hides out in a cabin in the woods with necklace.

She tells the jewels they are both damn-near indestructible.

She puts it on and puts on a fire before noticing that there are cops in the distance.

One of Victor’s goons checks out the situation.

When Robert and the others arrive, he insists on taking the megaphone.

He calls to her and she calls back that she’s sorry for what happened with Laura.

In the cabin, Holly grabs the briefcase and knocks the lamp to the floor.

A fire ignites and she hurtles out the door in flames.

Dante brings Sam to Sonny’s penthouse. She assures him that his family is her family.

Sonny and Nina are inside preparing food.

He gets her to reach into his pocket and pull out a box.

It’s earrings to thank her for changing his life.

As they exchange I love yous, she slips on the earrings. They chat about his kids, and she wonders if he’s missing his old traditions.

He assures her that this is home and suggests they start some traditions of their own.

She’d love nothing more. They kiss.

Dante and Sam arrive and then Sasha and Gladys show up.

After Sonny greets everyone, Nina asks Dante if his friend Cody is coming.

After Nina wanders off, Dante notices something is on Sam’s mind.

She admits she thinks Cody doesn’t like being asked questions.

He wonders why she no longer thinks his friend is a good guy.

They step onto the balcony to make-out and then he asks her what her problem with Cody is.

She didn’t like the way he reacted to her investigation of the necklace.

Sam brings up Cody having a juvenile arrest record and the records being sealed.

He got up to trouble when he was a kid too.

She suggests Cody’s issues might not be as in the past as he thinks.

Gladys tells Sasha and the others about spending her Thanksgivings with Brando in a casino. She’s sure he hated it.

Alexis shows up. Gladys blows up at her for releasing Esme’s name before the police even informed her she was a suspect.

Dante and Sam join them and the cop points out she’s not even a strong suspect yet.

Sonny tries to keep things calm but Gladys is still furious with Alexis. Dante promises her they will get justice for Brando.

As Dante and Sam leave, he tells her that he’s looking forward to spending the rest of the holiday with her. They make out.

Back inside, Sasha looks out the window and remembers her elopement with Brando.

He reminds her she doesn’t have to do things alone. She knows and is grateful.

She’s sure Brando would want her to embrace life and be with family. Nina smiles as

Sonny tells her how welcome she is.

Sasha explains that she and Gladys have finally started to understand each other.

Gladys slips into the hallway and calls to get a set at the next poker game.