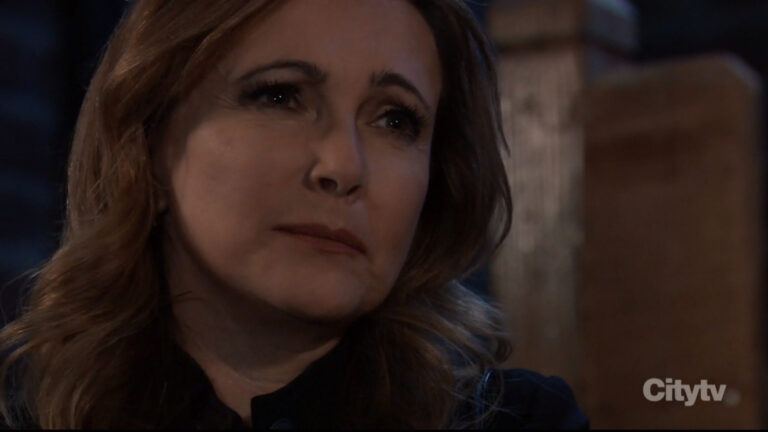 General Hospital recap for Thursday, November 17, 2022. In today’s GH episode, Brad learns the truth, Gladys makes a deal, and Sonny looks out for Sasha while Esme’s been faking it.

We also have Tuesday’s GH recap where Liz and Finn’s discussion was cut short when she learned Nik needed her, Carly warned Joss about Dex, and Michael discovered the messages on Dex’s phone.

At Metro Court, Sonny stops by Gladys and Sasha’s table to tell them that Brando will always be in their hearts. He asks how the guardianship is going. Gladys calls it a work in progress.

She did have reservations and remembered he said family was the most important thing.

Sonny takes Sasha to the kitchen to see the changes.

Once they’ve seen it, Sonny says Gladys has shown more depth and compassion than he knew but at the end of the day, she’s still Gladys.

He wants her to be honest with him.

After the meeting at Deception, she tried to block the deal, right?

Sasha admits she did but she’s trying to protect her share in the company.

She’s okay with Gladys who she thinks is looking out for her.

At the bar, Britt takes a drink and coughs.

Brad tells her to do something about that cough and she snaps at him.

He tells her to relax and she apologizes.

She wants to “rock the casbah” but Brad asks if this is about “the cowboy.”

She says no. Miss Wu interrupts. She’s glad to see him and his friend out.

Both women agree if anyone hurts Brad, they’ll be sorry.

Miss Wu admires Britt and tells the bartender to put their drinks on her tab. She goes and Brad admonishes her for speaking out of turn.

He can tell she’s keeping something from him. She reveals that his aunt was blackmailing her into ensuring he worked for her.

Brad isn’t upset and in fact, thinks she did him a favor. He likes working for Selina.

Still, Brad knows his BFF is dealing with something big. Britt ignores that and drags him to the Savoy for fun.

Gladys goes to Selina’s table and introduces herself. Miss Wu is sorry for her loss. She heard of Brando’s death.

Gladys thanks her and talks about being an investor. The court made it clear that what’s Sasha’s is hers and vice versa. Miss Wu is interested.

Maybe they’ve more in common than she knew. Wu tells Gladys about her private poker parties and how money exchanges hands.

Gladys is interested. Wu hands her a card with a password. “That’s all I need to join your poker game?”

Wu says to keep it quiet. Sonny and Sasha stroll up and he asks what kind of business they have together.

They cover, but Sonny knows something is up. He says nothing while Sasha hugs her mother-in-law for having her best interests at heart.

Holly and Robert sit at the bistro. He talks about who her true friends are. She asks why he’s so serious.

He calls friendships and betrayal serious business. He thought they were in this together? Holly gets worried he’s on to her but he says, “It’s Anna.”

He feels in the dark. Holly thinks she’s protecting everyone. He should call Robin.

Robert refuses. He hopes she’s gone underground and will be able to find her man — or her woman.

Holly questions him and he says Deputy Mayor Ashby might be involved.

Outside, Laura’s on a call with Marty. What kind of soup does he want?

He balks but she won’t take no for an answer. She’s coming over with sustenance. “Marty, we’re family,” she says.

She assures him everyone is hunting for poor Lucy.

At GCPD, Dante tells a cop that if Agent Whitten calls, he’s busy.

Sam appears. He’s happy to see her. She has food for him.

They agree they need privacy and head into the interrogation room. They kiss. He got her hoagies from Sal’s. He digs in.

Rocco suggested this. They talk about Anna’s case and how convincing the evidence is.

Sam thinks they should be investigating her great-uncle. Dante knows but is assigned to finding Anna.

He hopes that Anna and his father have covered their tracks. Sam is shocked.

She’s a superspy who can care for herself. Dante says so is Sam.

She likes that they take care of one another. They smooch.

They discuss spending money on renovating the kitchen but she doesn’t cook so Dante suggests going to Iceland with the kids.

She likes that idea. Next summer? They can do kitchen renos themselves. He’s intimidated by them. He tells her he loves her and they kiss.

Kelly Thiebaud out in GH comings and goings

At the castle, Liz says Esme’s pulse is elevated. They need to call an ambulance.

Nik says they can’t but it’s either that or she could miscarry. If he refuses, they need to deliver the baby.

Nikolas says it’s too soon. Liz tells him to find a knife. “For what?”

He bellows. “For the c-section. Without anesthesia.”

Esme jumps up and tells her to get her hands off of her. Liz knew she was faking.

She has no sympathy for her since she made a sex tape of her son and his girlfriend.

She’d rather see her give birth in Pentonville. Liz leaves and Esme asks if she’ll be able to live with herself if something happens to her and her baby.

Esme starts to laugh that Liz outsmarted her. She didn’t know she wasn’t just a mealy-mouthed do-gooder.

She starts to feel something jarring in her belly and realizes it’s not indigestion.

She laughs and then begins to sob. She grins and says, “Damnit Ace, see what you’ve done?”

They laugh at Esme but she should be seeing an OBGYN on a regular basis. She asks what’s next for them.

Nikolas says they’re not attached at the hip. Sam says they are. Nikolas will be a single parent again.

Whatever happens to Esme after tonight, he says, depends on Liz. Liz is done here.

Nikolas asks if she’ll go to PCPD. Esme will want to make her pay and lie that she was in on this with her.

She’ll make Liz an accessory to kidnapping. She freaks out. She won’t lose her boys.

Nik asks her to keep quiet. She asks if this means she’ll eventually be an accessory to murder.

Nikolas isn’t going to kill Esme! He was about to airlift her and Esme to Cassadine Island in Greece.

She’d be supervised and live a comfortable life on the island. Liz thinks there has to be an alternative. She asks him not to fly her to the island.

She’ll give birth there and Liz will help.

Laura heads into the bistro and greets Robert and Holly.

She’s there to get soup for her brother. Holly’s confused so Laura updates her on her two brothers she just learned about.

One’s pretty awful,” she admits and the other is deeply in love with Lucy Coe. Holly says they’ve met. Laura says he’s upset that “Anna shot Lucy in cold blood.”

Holly starts talking about what ifs about being gaslit and how you start to believe things that are untrue.

She realizes what she’s said and her eyes widen. They think she’s having flashbacks to the last few years but she denies it.

Her heart goes out to Marty.

She knows how it feels to lose someone through violence, negligence or even… selfishness.

She knows Anna is not responsible for Lucy’s disappearance.

Laura agrees but asks how she’s certain since it happened before she washed ashore.

Holly gets uptight and has to get air. Laura says Holly seems remorseful.

He asks if she thinks she’s working with Victor. Laura shrugs. Robert calls that a jump but Laura points out that she was whispering with Ashby.

Laura thinks she was struggling with her conscience just now.

Deep down, Laura thinks he knows Holly’s hiding something.

Outside, Holly recalls shooting Lucy Coe. She looks tortured, remembering getting the gun and removing the Anna mask and wig.