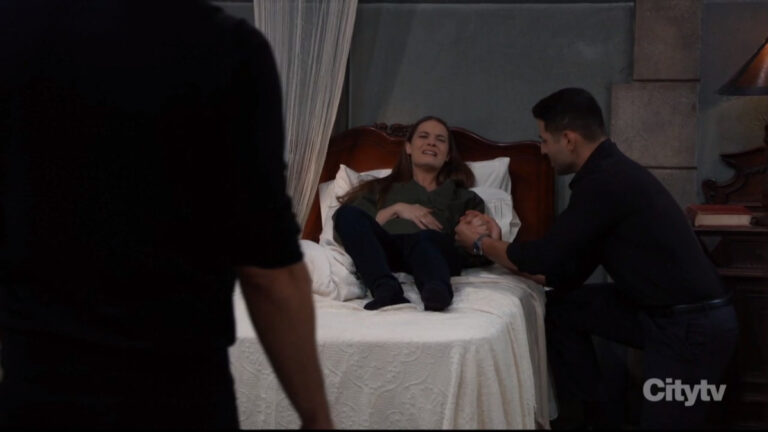 We also have Tuesday’s GH recap where Liz learned Nikolas has Esme, Nikolas decided it has to end, and Finn punches Jeff.

Carly stops by Brick’s room at the Metro Court to thank him for coming through for her. Nina spots them together and wonders what Dew would think of this.

Nina immediately heads to the dining room. She asks Sonny if Carly used to flirt with Brick and explains she saw her going into his room.

He needs details so she tells him that they were flirting but claims there must be a simple explanation. She realizes she’s ruined their meal.

Nina wants to stay out of everyone’s business. Sonny calms her down and urges her to let it go. She wonders if this matters to him because Brick is his friend or because Carly is his ex.

When he spots Brick, he immediately walks over to him and makes a jab about him leaving Carly “satisfied.”

Brick assures him that nothing inappropriate happened. Sonny reminds him that he works for him and asks what happened in his room. Brick can’t explain.

Assuring him his allegiance is with him, he tells him nothing compromising happened. Sonny accepts this but isn’t happy.

Nina joins them and Brick takes off. Sonny tells her Carly can see whoever she wants as long as they’re not connected to him. He trusts Brick is not having an affair with her.

At Michael and Willow’s, Drew offers to help them find her biological family.

When Michael steps outside and sees Leo, the kid shows him the phone he found. Michael says they will have to figure out who it belongs to.

Back inside, Drew offers to send a reporter to look into her past.

She worries that most of what Harmony told her is unreliable. Talking to people from the commune where she grew up will be a dead end.

He says that he’s not from the government and he can likely get them to open up. Hearing him say that almost makes her think this could happen.

It seems to him that she is in a hurry to find them and warns that it may take some time.

Michael and Leo walk in and head upstairs to charge the phone.

Willow continues making excuses for why she’s in a hurry and he tells her he knows how she feels.

She doesn’t expect her family to be as welcoming as the Quartermaines but she doesn’t have to like them. Leo runs out of the house.

Drew tells her how great family is and how fun it will be to see who the kids turn out to be. He’s confident he can find out who she really is.

Once Michael has the phone charged, he sees messages from Sonny. He wonders why his phone was there and he’s disappeared.

In the tower, Nikolas tosses Esme a bag and tells her to pack. He orders the jet fueled and says she’s going where no one will find her.

He won’t dump her in the ocean as long as she’s carrying his child. She reminds him he can’t leave town while he has so many people depending on him.

They bicker about her luggage, and he gives her five minutes to pack.

When he’s about to walk out, she clutches her stomach and screams about the baby.

Dimitrios says the helicopter will be ready in half an hour. Esme screams and Nikolas tells him it’s just an act.

Dimitrios helps her lay down and Nikolas makes a call for help.

Liz is shocked when she finds her father in Finn’s office at General Hospital. He asks how she is. She notices Jeff has a busted lip and suggests he leave before he makes things worse.

After she lays into her father for the chaos he causes, Finn gets a text from the lab and has to go. Jeff tells him how sorry he is for what happened to Reiko.

Once he’s gone, Jeff tells his daughter he knows what he did was unforgivable. There are things that have been left unsaid.

She thinks sending her away said it all. He walked out of her life 25 years ago and doesn’t get to be his father now.

Jeff insists that her narrative isn’t accurate. He and Carolyn just wanted her to be happy and healthy. They made mistakes but one thing they did right was finally admit the truth to her.

He doesn’t expect her to understand but the choices they made were out of unconditional love for her.

Jeff says the child he felt the greatest kinship for was her. Liz can’t see that and says she’s not the same person he sent away.

He hopes she will let him get to know her but he won’t push for it. Walking out, he tells her Finn seems like a good man. He hopes he hasn’t ruined things.

Once he’s gone, Finn returns and she tells him her father won’t be back.

After filling him in about her run-in with Esme, she brings up Reiko.

She hates that he’s in so much pain and wonders if he’s had space to think about things.

“You can’t be with me anymore, can you?” she asks. She wouldn’t blame him.

He says neither of them will forget what they’ve been through but they can still talk. Nikolas calls.

She tells Finn she has to go. They’ll have to finish this conversation another time.

Back in the tower, Nikolas tells Esme that help is on the way. He’s still sure she’s pretending. If she’s not really in pain now, she will be soon.

When Liz arrives, the prince asks her to give Esme an exam. She’s reluctant but agrees to do it.

A moment later, they find Esme passed out on the floor.

In Joss’ dorm room, she tells Dex he’s hot. “So are you,” he jokes. She puts a cool cloth on his head.

Once she sticks a thermometer in his mouth, she recaps Sonny torturing him in a freezer and then him getting shot. Sonny can’t be paying him enough to go through all that. She knows he’s not stupid, so why is he doing this.

Dex thinks about his orders from Michael to stay away from Joss. He won’t say anything.

Noting his high temperature, she warns they will have to head to the hospital if her mom doesn’t come back with the antibiotics fast.

They talk and he admits he doesn’t know much about her. He tells her about his love of college football and a friend who died in the army. He’d like to go to a game sometime.

As he babbles, she cradles him and gets him to drink water.

Carly shows up with pills. After Joss gives him a few, she tells her mom that he’s had a high fever for a day. They guess he will be better in the morning.

Sitting in the corner, they argue about Dex being there. Joss will show him the door as soon as he’s better.

Carly knows she’s compassionate but wonders if there is some other reason she’s taking risks for Dex. Joss explains they have a bond and are becoming friends.

They discuss Esme being on the loose and Carly tells her not to let her guard down. Looking over at Dex, she points out that he’s also a threat to her normal.

Joss says she’s in this and needs to see it through. Her mom feels like she’s looking in the mirror so she won’t give her any more warnings.

Her mom advises her not to open the door for anyone. They hug and Joss thanks her for her help.