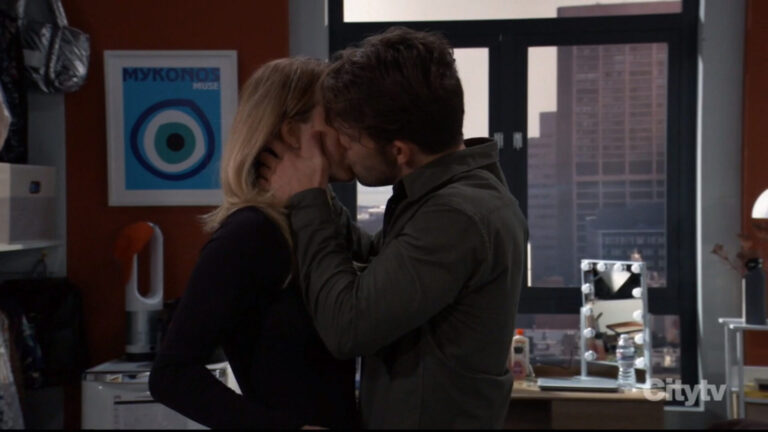 General Hospital recap for Monday, November 21, 2022. In today’s GH episode, Carly tells Sonny she’s seeing Drew, Britt gets tested by a Huntington’s specialist, and Scott urges Cody to stay away from the necklace.

We also have Friday’s GH recap where Valentin tried to smuggle Anna out of the country as Victor and the authorities closed in and Victor learned who has the Ice Princess jewels.

In Joss’ dorm room, Dex wakes her when he touches her hand. She checks and his fever is going down. He’s feeling better but his side still hurts.

He thanks her for taking care of him and asks for some clothes. She reminds him he can’t even stand.

He gets up to prove he can. She reminds him the last time he tried going home he popped stitches. He’s still determined to go.

They argue about this and what his chances of getting caught collapsing are.

Once he’s in bed again, she gets him some clothes and helps him dress. She’s impressed he can pull up a zipped, but she needs to put his shoes on.

She insists that she will take his old bloody clothes her mom’s place and burn them. He admires all she’s done for him and kisses her.

She kisses him back. He tells her this wasn’t supposed to happen and he has to go.

As he leaves, she gives him his keys.

Brick stops by Sonny’s office, where his boss is leaving a message with Dex. Brick hasn’t been able to find him either.

His boss tells him he’s not cool with what he did for Carly.

Brick assures him he would tell him everything if the situation was dangerous.

Drew is stretching in the park when Carly approaches him. He just finished a run. She tells him someone knows about them: Joss.

He knows she can be trusted and brings up Michael and Willow asking him to look into something that could be important to them.

Olivia wanders over and notices them together. They go out of their way to claim it’s a coincidence.

Brick sends Carly a text to warn her that Sonny is worried about them meeting. She takes off.

Olivia tells Drew that Leo can’t stop talking about that cell phone he found. She rambles about his and notices he’s not paying attention.

She guesses he’s thinking about Carly and asks if things have progressed.

He claims they are just staying friends. She knows it would be good for them to keep it quiet given their questionable business relationship. Olivia assures him she wouldn’t say anything to Ned about it if they were seeing each other.

Carly shows up at Sonny’s office to set him straight about Brick. She lies and claims that she’s asked Brick to cover up her digital tracks with Drew because they could be guilty of insider trading.

When she admits she and Drew have been seeing each other, Sonny claims he’s happy for her. Drew’s a decent enough guy and he’s not threatened by him.

When he admits Nina saw him go into Brick’s room, she’s furious that his girlfriend has been meddling.

Brick brings Dex in and Carly takes off. Sonny demands to know where he has been. Dex explains that he lost his phone and his wound got infected.

He says he only stayed away because he didn’t want to bring any trouble to him.

Carly goes to her daughter’s room and tells her she just saw Dex at the office. She tells her daughter she can’t save him and shouldn’t see him again.

They go back to Carly’s to burn the evidence.

Scott joins Cody at the Metro Court. Cody wants legal advice since he may be coming into an absurd amount of money. It turns out Serena may not have walked away with the whole Taub fortune.

Scott finds all of this suspicious. He advises him to run for the hills rather than get mixed up with the Ice Princess.

The lawyer won’t have anything to do with it. Cody is determined to go ahead.

At General Hospital, Britt thanks Austin for pulling some strings to get her an appointment with the Huntington’s specialist, Dr. Tallone.

The doctor arrives and Austin sticks around for moral support. The specialist explains that Britt may be further along in stage two than she thought.

Although she’s reluctant, Britt tells Tallone about her symptoms and the specialist wants to run some tests.

After Tallone leaves, Britt thanks Austin for treating her normally. It’s hard for her to deal with this with people closer to her. She wants her loved ones to remember her for who she is, not for what the disease does to her.

Tallone returns and explains her tests show she is entering stage three. The average lifespan is 5 to 15 years, but she could need full care within 18 months.

Once Tallone is gone, Britt tells Austin he’s been great, but she needs to be alone.

Once she is, she paces her office and picks up her diploma. Sobbing, she hurls it across the room and trashes her desk.

Cody arrives as she picks the necklace off the floor.

On the pier, Robert confronts Holly about working with Victor. He knows she tipped Victor off about where Anna was because he fed her a fake address.

She admits she’s been doing his bidding but not by choice. He reminds her of how much danger they are all in. She needs to tell him everything.

Slowly, she explains that she was investigating Rudge and this led to Victor. Her cover was blown and Rudge kept her captive for weeks.

After she managed to make a call to Robert, Victor revealed himself to her and threatened her. That’s when he killed her sister Paloma in front of her.

He guesses it was her sister’s body wearing her wedding ring they found at the casino.

Victor held her captive and moved her around until he found a use of her and brought her there. The Cassadine got her to frame Anna and distract him.

She admits she shoot Lucy. He’s shocked. She insists Lucy isn’t dead. Victor is keeping her for leverage and made Holly wear an Anna mask.

Lucy was shot with a rubber bullet and fished out before being taken away. Holly begs him to keep this quiet. If Victor discovers she has betrayed him, he will kill her son.

Victor sends her a text saying he’s on the way. She tells Robert he needs to go.

After he ducks away, Victor shows up to say that Anna has escaped. She needs to be on her guard. He has a new assignment for her.