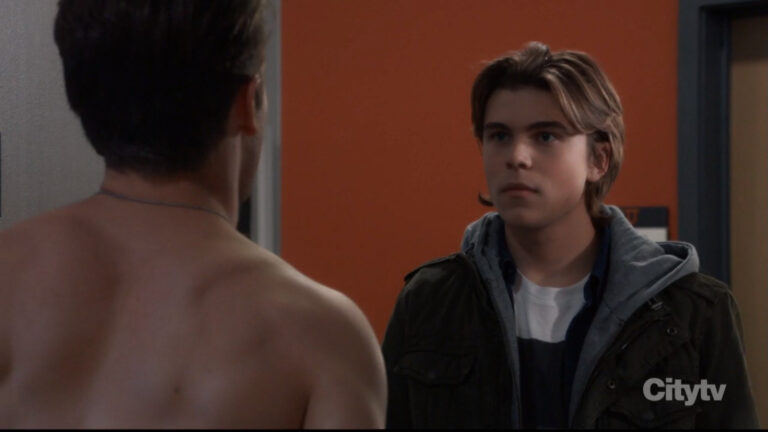 General Hospital recap for Friday, January 20, 2023. In today’s GH episode, Portia and Curtis urge Marshall to be re-tested, Finn tries to explain his break-up to Violet, and Dex tells Joss he will be turning away from Sonny soon.

At Wyndemere, Victor tells Nikolas they have business to discuss. He announces that he and Ava have hammered out all the details of his divorce.

Nikolas finds it hard to believe she didn’t talk to him directly and that she will never come home.

His uncle informs him that she will be coming home, but Nikolas won’t’ be there anymore. The prince refuses to leave Spoon Island.

Victor reminds him of all the evidence he has of his various crimes. He has big plans for the family that Nikolas keeps messing up. The next time he defies him will be the last.

Victor hands him the divorce papers and orders him to have them signed by the time he gets back.

At General Hospital, Austin jokes around with Ava about replacing her ankle with her knee. She wishes she could have her heart removed.

They joke about their bad break-ups and she wonders if Nina go the results from her bloodwork. He can’t speak to that, but he says she seems to be
suffering from some heartache.

She may not know him well, but she thinks it would be a shame to get rid of his heart.

When Austin heads back to his office, Mason is waiting for him. Their boss has been complaining about Austin not fulfilling orders.

Austin declares that he is done with their boss.

On his way out, Mason threatens Maxie’s daughter. As Austin grabs him by the lapels, Ava interrupts. 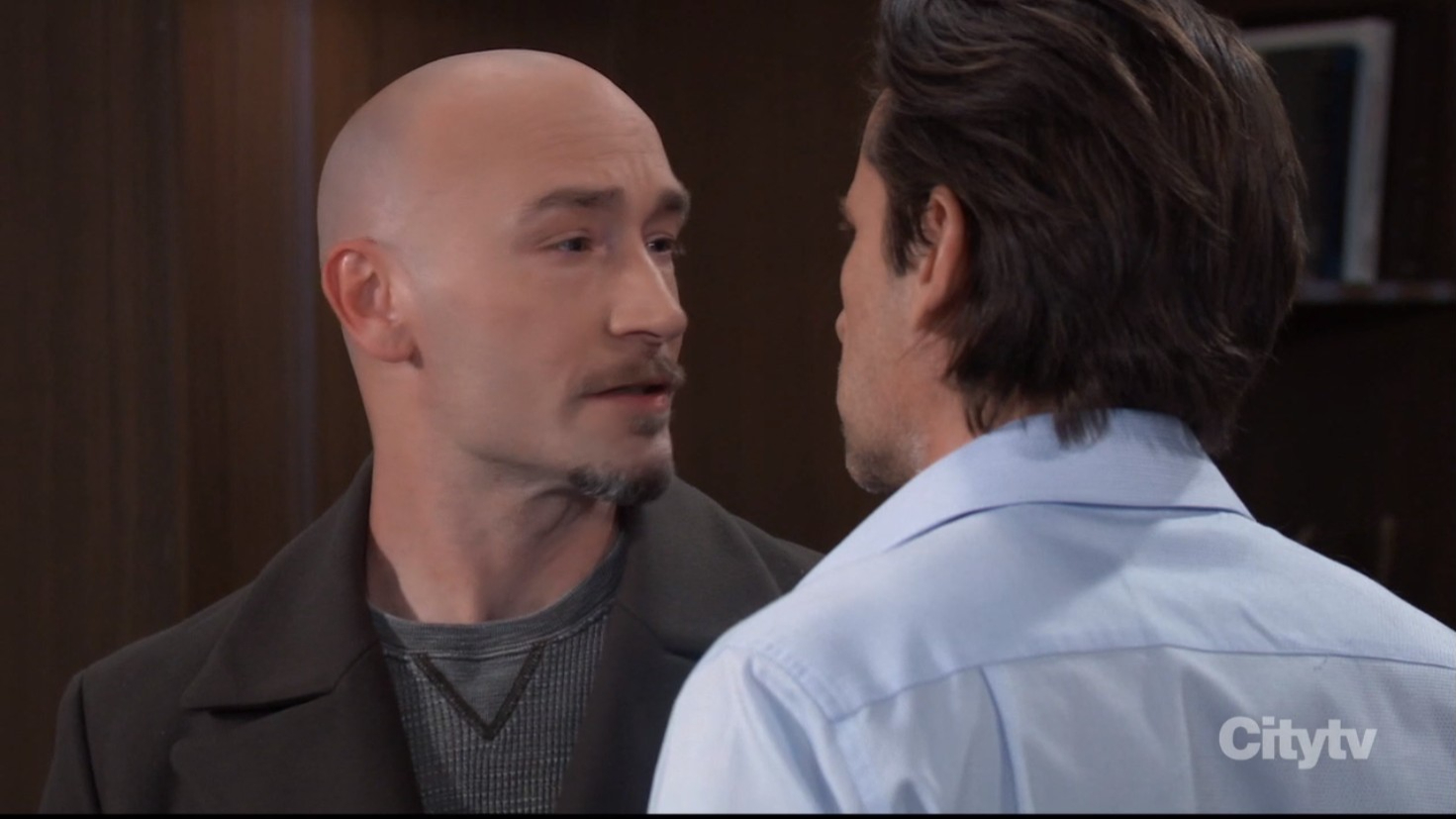 Michael bumps into his mom and she asks after Willow. He accuses her of not caring about her feelings. She insists he couldn’t be more wrong and all she was concerned about was Willow’s feelings.

Carly reminds him of all the damage that Nina did to their family. She won’t apologize for trying to shut her out.

He gets her to walk through how she obstructed Drew’s investigation of Willow’s biological mother.

Her son tells her that she played God with Willow’s life. She may not have done it out of malice, but with all the lying and manipulating she did, she was acting exactly like Nina.

His mom still thinks that Willow needs protection from Nina. Michael agrees, but they need her.

He hasn’t changed his opinion of Nina and he understands why his mom did what she did. But he still thinks she should have let Willow decide.

Carly can see that now and she’s sorry. Drew is disappointed in her and she feels like she’s ruined things.

Michael says Drew is a forgiving guy. His mother wonders if Michael will turn his back on her now. That would kill her.

He says what she did was wrong. What Sonny did was choose Nine over his family.

Willow has forgiven her and he will eventually. He needs her in his life. In tears, she tells him she needs him too and hugs him.

Dex drops Joss off at the dorm. She asks him in to talk.

Inside, she tells him about Nina being Willow’s biological mother and Carly keeping it secret. Michael and Sonny are furious. Joss feels bad for her mom.

She’s sure that Michael will lash out at Carly because he knows he can’t alienate her, but he hates that she’s the one taking the heat when the people to blame are Sonny and Nina.

She vents about Sonny and all the damage he’s done to her family. She wishes Dex would quit and walk away.

He tells her that he will within six months. There is something he has to finish first and he can’t explain more right now.

She agrees to trust him on that.

Being with him is the only place she wants to be right now. They kiss.

After they have sex, she thanks him for being a refuge. She’s feeling so many things at once. Safe, happy, worried, and guilty. Thinking about how rough things are for her brother is hard to stand.

Violet rushes into Kelly’s with her father trailing behind. They find Cam and she wonders why he and Liz haven’t been coming to see her.

As she asks Finn if he doesn’t love Liz anymore, the nurse shows up. Liz gives her a hug. Violet asks her to join them for brownies.

After Cam leads the kid away to get dessert, Finn tells Liz that his daughter has been asking a lot of questions about them. She suggests they figure out what to say together.

When Violet returns, Finn sits her down and tries to explain things. It doesn’t go well.

Liz sits at the bar with her son and he assures her he’s not falling apart over the breakup. She’s sure it must be weird for him not being there for

Joss while her family is going through a nightmare.

He doesn’t know what she’s talking about. After she fills him in about Willow, he feels bad for being cold to Joss and rushes out.

Liz brings brownies to Finn and Violet. She wants to draw a picture of Cam and his girlfriend. They explain what a break-up is. Violet is confused.

Her father says sometimes people realize they are meant to be together. They can still be friends and Liz will always be her aunt.

Once Finn and his daughter leave, Carolyn shows up.

At Portia’s, she tells Marshall that she thinks he may have been misdiagnosed for schizophrenia and should have more tests. He says it’s too late and he accepts it.

She keeps pushing until he blows up and tells her to mind her own business.

He apologizes for raising his voice. Curtis returns and wonders what all the apologizing and shouting are about.

His father explains that Portia thinks he should get a second opinion about his diagnosis. She points out that he has had no symptoms.

Curtis thought that was the point of all the medications he’s on. Portia adds that his genetic testing also showed he had no markings.

Nothing from Marshall’s life or behavior would suggest his diagnosis. Marshall points out she’s not a psychiatrist. His son suggests he see one.

Marshall remains reluctant and thinks they are leaping.

They encourage him to find out if he is really sick.

He gets distraught as he tells them all he lost to the disease. If he was misdiagnosed, then all the sacrifices he made were for nothing.

Curtis assures him that none of this is his fault. Portia points out how freeing it could be if he wasn’t sick.

Marshall doesn’t think he can face it.

They tell him he is strong enough to face a different future. The next chapter of his life could be much better than the last one.