Home » General Hospital » GH Recaps » Carly Slaps Nina Across the Face and Warns to Stay Away From her Husband, While Victor Wants the Cassadines to Come Together

Carly Slaps Nina Across the Face and Warns to Stay Away From her Husband, While Victor Wants the Cassadines to Come Together 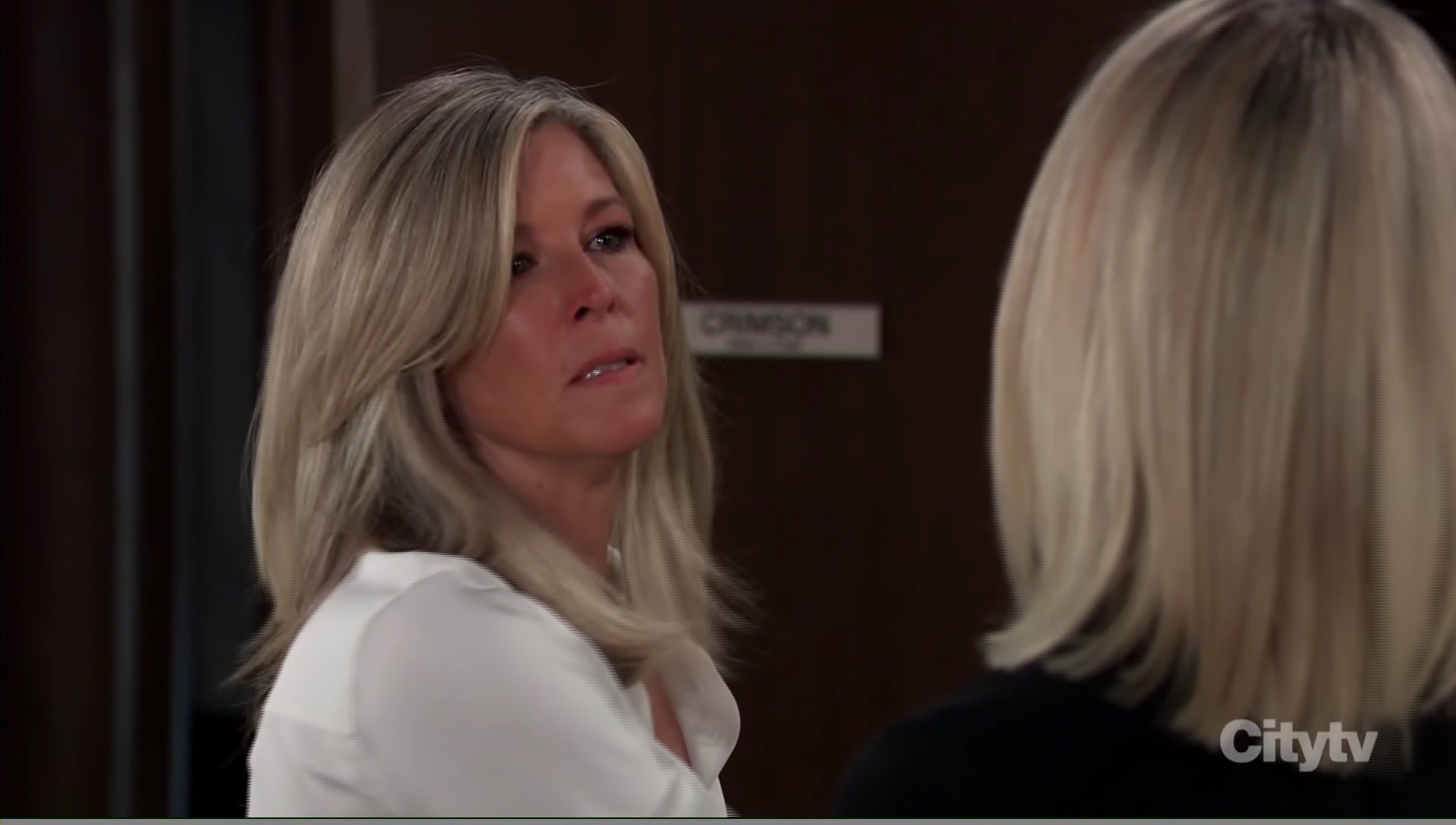 SoapsSpoilers’ General Hospital recap for the Monday, January 10, 2022 episode. Today, Nina and Carly got into it, while Spencer and Esme’s romp was interrupted and Trina admitted why she’s going away with her friends. We also have Friday’s GH recap where Ava told Spencer his punishment, Sonny wondered if he has a future with Carly, and Phyllis lectured Nina.

Laura arrives at Sonny’s. The two embrace. She’s so glad he’s home. She notices he’s poured himself a drink. She tears up and lets him know she’s sorry to tell him this but Luke has died. He hugs her. “I’m so sorry,” he says. She drinks tea and tells Sonny she’s unsure of why it hurts so much.

She thinks it’s because her family is so far away. “There isn’t anybody to cry with.” She can’t do it with Bobbie. Sonny knows. It was her brother.

Luke seemed like someone who would live forever. Laura wanted to tell him with Carly but learns she’s out. Laura liked knowing that Luke was out there somewhere. He was her partner for a long period of her life. She was a completely different person back then and likes who she is now. They share a laugh and she goes on to say that she has Kevin who is her life partner now. She’s worried about Luke’s loved ones.

Later, they share a laugh over her brother finding God. She has no idea what game Cyrus is playing but it’s not her concern. She can tell Sonny’s upset and asks if he’d like to talk about it. He screwed up, he tells her. He’s not sure he and Carly can fix it. Later, Laura’s been filled in on “Mike” falling for Nina. Laura isn’t judging him but asks if he was ever going to tell Carly. He wanted to but says Jason died and Liam died and he didn’t want to pile everything on her.

He tears up and says he wanted to leave Nixon Falls behind him and move on. Laura understands why he did what he did. He asks if she thinks Carly will come to terms with it. He knows what Nina did wrong but he didn’t see her being prosecuted.

He has feelings for Nina. He doesn’t want to. Now that they’re both in Port Charles, he can’t keep his feelings separate and doesn’t know what to do with it. Later, he gets a message from his pharmacy. He’s out of Lithium. He looks at Carly’s number and thinks of her.

Finn tells Liz how beautiful she is. She shows him she found her wedding ring in her locker. She has no idea how it got there. She didn’t put it there. He asks if one of the boys did it. She thinks one of them might have a problem with Finn dating their son.

Liz says her boys were happy for her. Finn wonders if it’s about Jason, not Franco at all. She thinks if it was Jake, he would have told her. Finn offers to be with her when she talks to them but she refuses. He asks to reschedule dinner.

Curtis kisses Portia’s neck in the elevator. “We’re acting like teenagers,” she says, laughing. The doors open to Trina. It’s awkward but Trina reassures her mother it’s fine. She tells them about going to Joss’ family cabin for a few days.

Portia’s excited to hear and so Curtis figures the two should spend some time alone. Curtis kisses Portia goodbye and tells her to have fun with her daughter.

The women get a table and talk about Ava’s mistake with Morgan and how she’s trying to make amends. Trina admits she finally saw the Ava that Spencer and Joss despise. Portia thinks Ava taught her a good lesson that they’re all capable of good and bad. She talks about the restitution and says she won’t order Spencer around, even though she’s his boss.

It’ll make things more awkward though.” She talks about being the fifth wheel on the trip and that she told Esme she was going just to make her stop with the fake pity. Trina wants Spence to have good memories before he goes off to Spring Ridge since he’s so afraid of it. Portia reminds her kid that taking care of him isn’t her job.

At home, Esme stares at the drugs she bought before hiding them in her purse when Spencer turns up. He’s in a mood and shares that he had to pay for his dinner while Ava used his trust fund money to pay for her own dinner. Esme grouches that Trina’s part of his restitution.

He lets her it’s just another way for Ava to humiliate him. According to Ava, he hurt Trina’s feelings, too. Esme’s pissed. He suggests they share his dinner, but she has a better idea. They start making out since they’re alone. Spencer’s shirt comes off and then a knock comes to the door.

Annoyed, Spencer answers it to Victor, who sees the display and smirks. “Well, well, well.” They invite him in and Spencer gets dressed while he tells Victor about Ava lording power over him. Victor thinks it’s time this family came together, “All the Cassadines in a united front.”

He thinks clinging to an imaginary fantasy is juvenile. He thinks he and his father need to put their slights behind them.

Esme stands up for Spencer and Victor disregards her and tells Spencer that it’s time he lived up to his mantle of Cassadine heir and put family first. Ava and his father are a team and they need to bring them into the larger family circle. In time, he’ll see Ava’s influence over Nik will lessen.

That’s what Spencer wants. Victor tells him women will come and go in his life but family is forever. Esme crosses her arms and stares at him.

Nina’s about to go into a meeting when Carly drops by the office. She asks what exactly happened between her and Sonny in Nixon Falls. Nina thinks that’s between her and her husband. She won’t add to it and is sorry the way she found out the way she did.

She’s trying to respect Sonny’s wishes. Carly yells, “You are so far from the high road, you’re under water.” The shouting goes back and forth and says she’s not the one that drove Sonny to get drunk on New Year’s Eve. “Oh,” she says, noticing Carly didn’t know. “Something else Sonny decided not to tell you.”

She reveals how drunk he was. Carly snaps at her and calls her a “conniving bitch” and thinks she always will be. Nina calls Carly an idiot. “Sonny’s home and you’re here sniping at me.” Carly gloats that Sonny wouldn’t have given her a second glance if he knew about her. Nina thinks that if she keeps this up, she’ll lose Sonny for good. “I can tell you this,” she snaps. “If Sonny comes to me, I’m definitely not going to send him away.”

She knows Carly thinks that what happened between her and Sonny in Nixon Falls couldn’t happen again but thinks that deep down she knows that it could happen again. Carly hauls off and slaps Nina and warns her to stay away from her husband.

Marshall finds TJ at the hospital and comments on him working with the infectious diseases. TJ likes the work. It’s uncomfortable so TJ takes him to a private room. Marshall asks if Curtis warned him away. TJ denies that. They discuss how terribly things went at his hotel with Curtis, who he says he can’t do anything right with. He wants to put his past behind him. It’s too painful to talk about. “Is your son not worth the pain?” TJ asks.

Marshall says his answers will only drive his son away. Curtis arrives, not pleased to see his father. TJ gets paged and goes.