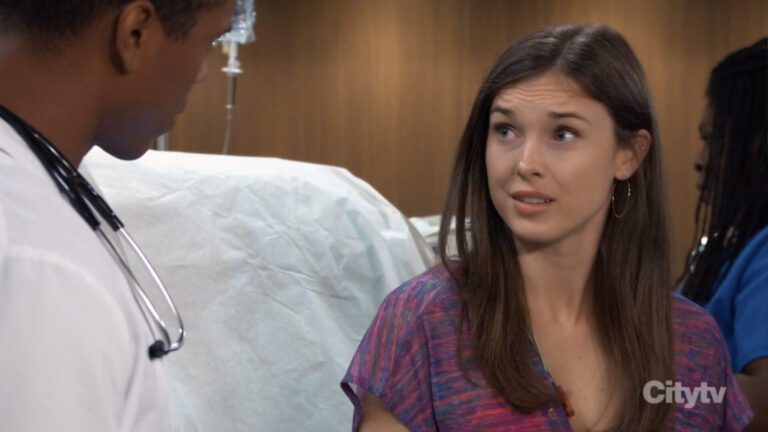 General Hospital recap for Tuesday, June 28, 2022. In today’s GH episode, Anna wonders what Valentin is hiding, Victor flirts with Obrecht, and Olivia is disappointed in Ned.

We also have Monday’s GH recap where Aurora’s sock plummeted, Drew had bad news for Carly, and Willow fainted. *GH did not air on Tuesday.*

At Kelly’s, Felicia is asking Anna about her date with Valentin. Victor pops up and asks about it as well. Valentin breezes in and tries to escort his father out but Victor suggests they all sit together.

His son doesn’t think that’s a good idea so Victor suggests they take a raincheck and exits. Anna wonders what business Valentin had with his father. He claims he’s just being polite to keep an eye on him. Felicia takes off to get more coffee and returns as Valentin is asking for second date.

He fills them in about the ELQ meeting and assures Anna he will always make time for her. After receiving a text, he abruptly exits. That’s weird. Felicia pries some details about the date out of her.

Anna is worried that Valentin is distracted by more than ELQ. Felicia is sure that whatever it is has nothing to do with his feelings for her. Anna is crazy about him, but he brings complications, like his father.

At the Quartermaine estate, Olivia asks Ned what prompted him to throw away his family’s legacy. He insists this was the only way to retain a powerful position in the company.

There was no compromising with Michael and Drew. She asks if this is really worth alienation from his loved ones. He explains that he’s only thinking of what’s best for their future.

She worried he’s made himself his family’s enemy but he is sure that he can handle anything they throw at him. Ned doesn’t need them when he has her, his daughter, and Leo.

Olivia is hurt that he hasn’t confided in her about the choices he’s been making. He says it wasn’t a matter of trust. She thought he’d changed for the better.

Out on the patio, Michael makes a call to order another action against Sonny. Leo pops up and asks what he’s planning. Michael assures him it was nothing.

The kid peers through the window and notices Olivia seems angry with Ned. Michael assures him they love each other and helps him feed some apples to his horse.

Later, Leo goes in to see his parents with hay in his hair and says he messed up. He fell off a stool when he was trying to feed his horse. He didn’t want to interrupt them when they were fighting. They assure him they will always help when he needs it.

On The Grill patio, Drew breaks the news to Carly that Ned sided with Valentin. She’s appalled. He adds that the merger has been killed. Valentin out-maneuvered them again.

Shareholders left Aurora in droves and she likely took a very big hit. “You have no idea,” she says, explaining she sold her half of the Metro Court to buy stick. She calls her financial advisor and then explains she doesn’t know what will happen.

Drew promises to help her but she’s not sure there’s anything he can do. Taking her hand, he offers to help her, even if it’s only to be there to lean on.

When her advisor Reggie arrives, he tells her that even if she sold all her investments, it wouldn’t be enough to buy back her part old part of the Metro Court.

By the pool, Sonny tries asking Willow what happened at ELQ. She passes out as Liesl arrives. While Sasha calls 911, Obrecht checks her over as she comes to. They give her juice and Sonny helps her away.

Sasha calls Michael to tell him they are taking Willow to GH. Once they are gone, Liesl tells Nina to stop pretending she cares about Willow. She worries about Wiley being brainwashed against her.

Her aunt starts teasing her about Sonny. If she’s happy with him, she approves. Nina only wants her to be happy too. So why did she say no to Scott’s proposal? Obrecht insists she’s an independent woman. Her niece thinks she should make Scott permanent. Would she say yes if he proposed under better circumstances.

Liesl says he’s very different from Faison and Victor. He’s just fun. The topic turns back to Sonny. Nina admits that falling for Mike was easy but it hasn’t been smooth with Sonny. Her aunt tells her not to make this more difficult.

Victor appears. Obrecht quips that she didn’t know vampires could be out in the sunlight. Nina leaves him with a warning. Victor sits beside her and tells Liesl there is still a chance they could be together.

She shoots that down. He doesn’t think “blustering Baldwin” will ever satisfy her when she is leagues ahead of him. He’s sure she will always carry a torch for him. “We belong together,” he says, before walking off.

Victor goes to the Metro Court to speak to Valentin in private.

At General Hospital, TJ and Epiphany chat about time management and he hands her a stack of reading. He gives her his old textbooks. Willow is rushed in by Sonny and Sasha and the doctor and nurse wheel her away.

Sasha wonders what’s going on. “Bad things happen here,” she points out. He thinks she’s overreacting so she lists the terrors. Michael runs in. Sasha recaps the situation.

Down the hall, TJ and Epiphany check on Willow. She admits she’s had some light-headedness over the past few months. She’s feeling stressed out. He points out this is her second time collapsing and they need to run some tests.

Michael comes in and the medical professionals leave to run tests. Willow tells her boyfriend that she’s fine. He’s noticed she’s been low on energy. She admits she might have forgotten to eat breakfast. As soon as he leaves to get a blanket, she nearly passes out.

Epiphany tells Sasha to keep thinking good thoughts and walks off. Sasha thanks Sonny for his help today. She admires how well he’s taken care of his family, especially Brando.

They talk about how hard it is to lose a child. He doesn’t want another confrontation with his son so he decides to leave. When she bumps into Michael, she tells him his father was very worried about Willow. Michael worries something could be really wrong.

TJ returns to Willow with the results from her tests. She’s pregnant.