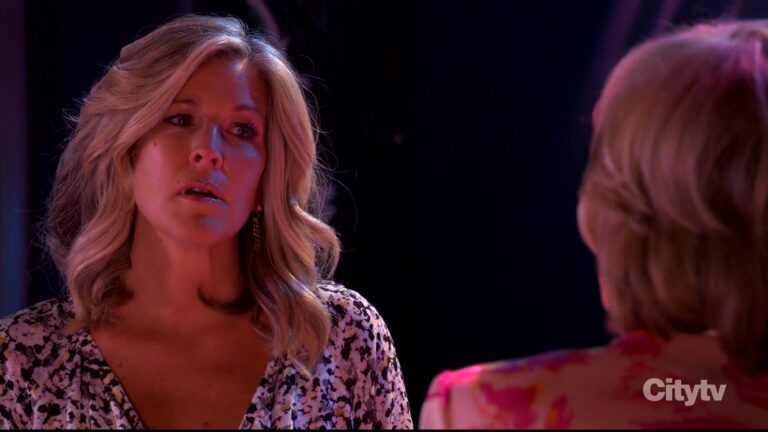 General Hospital recap for Thursday, September 15, 2022. In today’s GH episode, Trina tells Rory that he’s real, Michael tells Dex to stay away from Joss, and Nikolas asks Ava if they could have a future.

We also have Wednesday’s GH recap where Brando was rushed into surgery after being hooked, Sonny realized Nikolas was innocent, and Carly was stuck in Florida.

Cam, Joss, Rory, and Trina stand around the pool and talk about their classes. 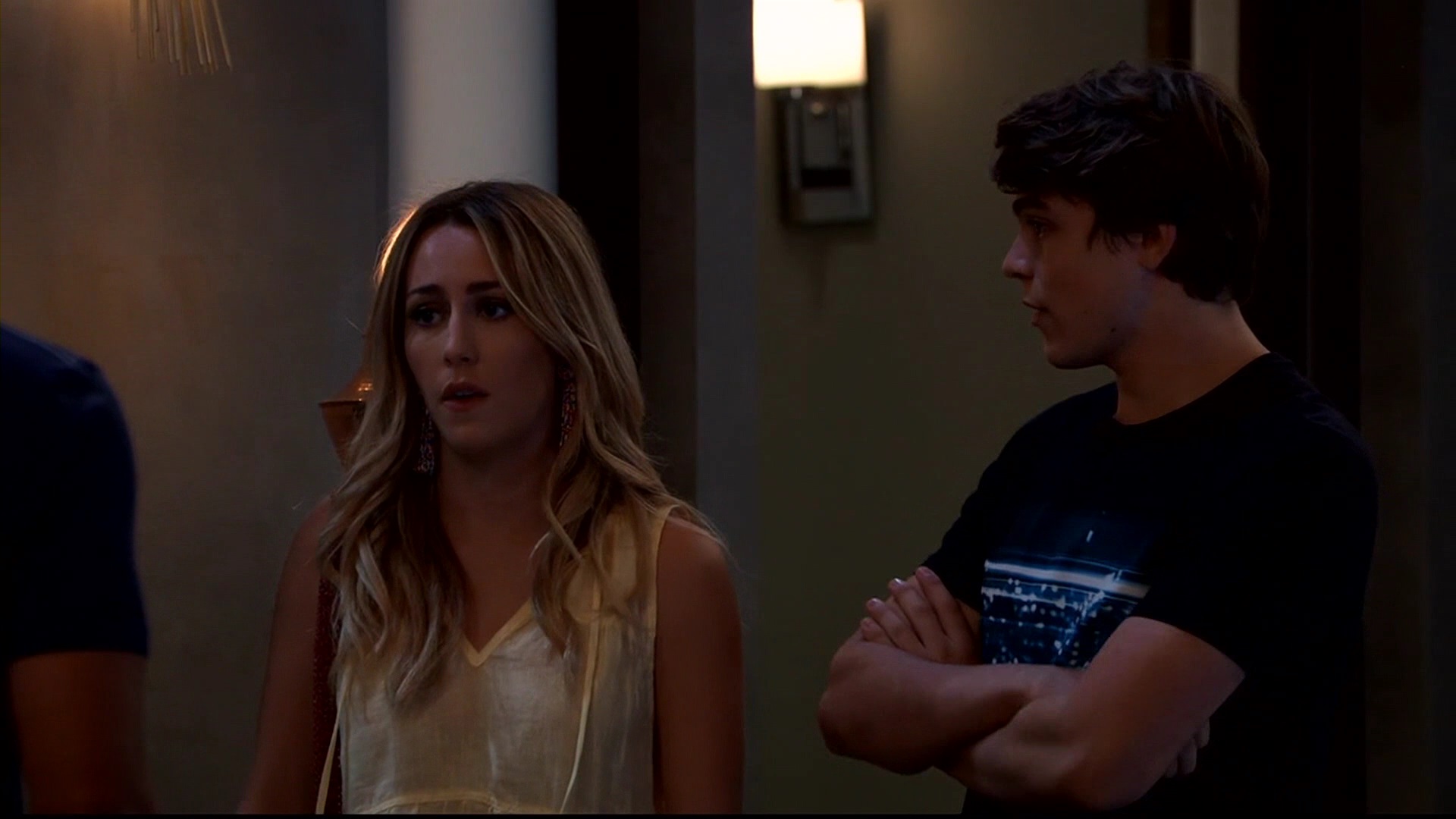 Trina leads Rory away and thanks him for coming. She says they don’t have to talk about school and brings up the weather. He assures her she can talk about school, even though he didn’t go.

Trina suggests they talk about Spencer. She explains that he was trying to get evidence against Esme all along. Ava told her that he has feelings for her. Rory guessed that part given that he went to prison to give her an alibi.

Now that she knows the truth about Spencer, does that change things for them? It means a lot to her that Spencer believed in her innocence, but he hurt her. He’s always getting in his own way and can’t be real with her.

Joss and Cam talk about the situation with his mom and hold hands. Trina comes over and she and Joss send Cam off to get them drinks. 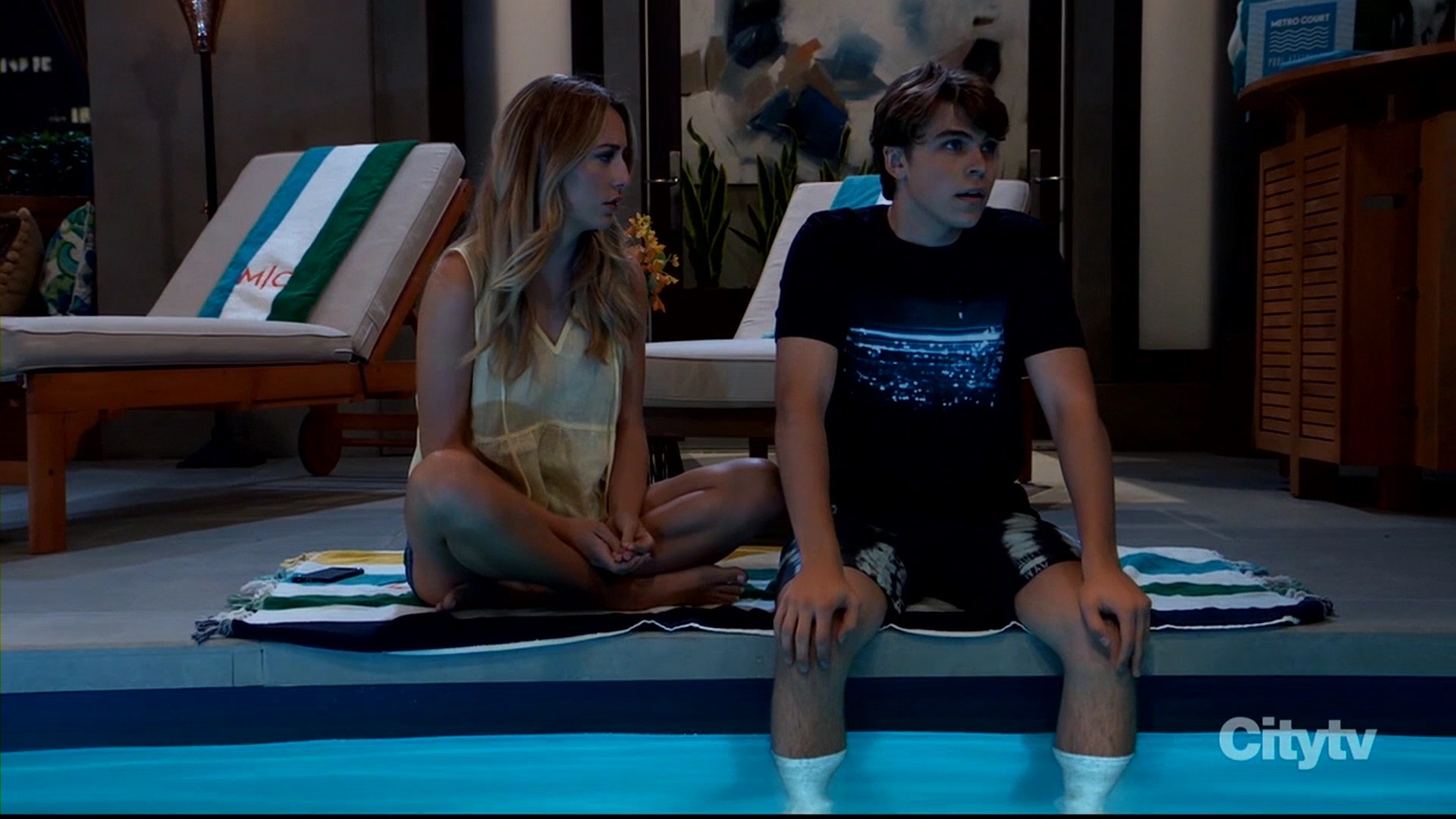 As the ladies sit, Trina recaps the conversation she just had with Rory. Trina claims her feelings for Spencer are gone and she’s moving on.

They chat about Joss dumpster diving for her sister’s bracelet. She admits that Dex was with her and she hasn’t told anyone. Trina gives her a look and her friend gets defensive.

Cam returns and wonders what he’s missed. Joss turns to Trina and shakes her head.

Dex meets with Michael on the docks and updates him on the situation with Sonny. Michael doesn’t think he’s moving up in the business fast enough.

Dex tells him he can get something incriminating on Sonny but needs more time. Michael thanks him for saving Ava, even though he can’t stand her.

After they talk about what happened and how important Joss was to saving her, Michael says those were extreme circumstances and he doesn’t want him with his sister again. He doesn’t want to have to lie to her.

Dex knows they are ultimately supposed to take down Sonny, but he doesn’t hate the guy. “Taking down Sonny will help me make up for my mistakes,” he says.

At General Hospital, Sonny tells Nikolas he knows he didn’t attack Ava. There’s been another attack with a large hook. Kristina saw it. Her screaming scared off the attacker.

After the mobster walks out, he orders the bodyguard not to let anyone in.

Nikolas hopes his wife feels better knowing he didn’t try to kill her. “I guess so,” she shrugs. It’s unbearable to think the man she loves could attack her.

The prince tells her all he wants is a life with her. She says he’s blown it all up by being weak and stupid. He points out he’s been protecting her without hesitation. He will always love her.

Nikolas thought she understood him because deep down they are the same. They have both made mistakes, but when something breaks, you fix it. Sobbing, Ava says, “Not always.”

He wonders if their trust is gone forever. She doesn’t know. Moping, he walks out as she wipes away her tears.

Gladys tells Sasha that Brando will be in surgeon for a few hours. Kristina assures her the surgeons are the best. Nina arrives and comforts Sasha, who feels like she’s falling apart.

They wonder why he was in the alley in the first place. Sasha hopes to try to help someone won’t cost him his life.

TJ comes out and explains the surgery is still happening.

One of his ribs was shattered and punctured a lung. They are retrieving all the shards right now.

As he heads back to the OR, he spots Kristina and asks where Sonny is.

Sonny returns to the group and his daughter rushes over to hug him. She tells him how scared Sasha is. He doesn’t think she’s in any shape to deal with Brando’s attack.

They walk over to her and offer her any help she needs.

Jordan shows up and tells them forensics are still gathering evidence. She needs to speak to Kristina.

The cop sits with her and Sonny and takes her statement.

Kristina assumes the attacker was a man but it was raining hard and she only really saw the hook. She’s getting upset so Sonny tells her to take a break.

After Kristina walks off, Sonny asks Jordan if his daughter is in danger. She thinks they are crimes of opportunity.

They join the rest of the group. Rory arrives and they ask questions.

They learn that Joss and Dex were there and left before the attack.

TJ returns and announces there has been a complication. His surgery has been suspended until his blood pressure stabilizes. They are doing all they can.

Dex arrives and Sonny corners him. He saw him with Joss earlier and says they seem friendly. He asks him to discretely keep an eye on her. “You can count on me boss,” Dex says.

Rory heads to the pool with another cop and tells Joss he needs to talk to her. He tells them about the attack. Joss explains she followed Dex out the back since he left his sunglasses inside.

She’s creeped out. Rory wonders if Dex saw something.

In the Quartermaine kitchen, Drew wonders why Carly isn’t calling him back.

Willow enters, fresh from a nap. As he makes her some tea, he tells her he knows how hard what she’s going through must be on her body.

“Who told you?” she demands. He’s confused. Realizing he’s just talking about her being pregnant, she covers.

When she nearly falls over, he helps her sit. She talks about how lucky Wiley and her baby are to have such a great family.

Michael wanders in and tells them Brando is in surgery. After he fills them in, Willow insists on going to the hospital.

In Jacksonville, a woman tells Carly how much she admires her for reading a book on paper. The woman introduces herself as Payton Honeycutt (played by Linda Purl). They chat about the city and Payton tells her about the beautification guild.

She spots the husband of a friend with a woman who is definitely not her daughter. Appalled, Payton assumes she’s a call girl. Carly doesn’t see the big deal.

She’s startled when Payton tells her about having Ruby Anderson’s house of ill-repute torn down. “She was my great aunt,” Carly says. She never knew her back there.

Payton gives Carly a lecture about social status. As she steps away, Carly suddenly recognizes her and starts describing the house she lived in. Peyton realizes that she’s Caroline Benson.

The worst day of Payton’s life was when Carly met her daughter, Reese.

She let her tag along for Reese’s sake, not seeing the harm until it was too late and Carly seduced her husband.

As Payton calls Carly trash and a tart, she blames her for her daughter’s accident.

Carly blames everything on her husband who was 40 while she was just 16 at the time and says she doesn’t owe anyone anything.

Payton tells her to get out of Jacksonville.