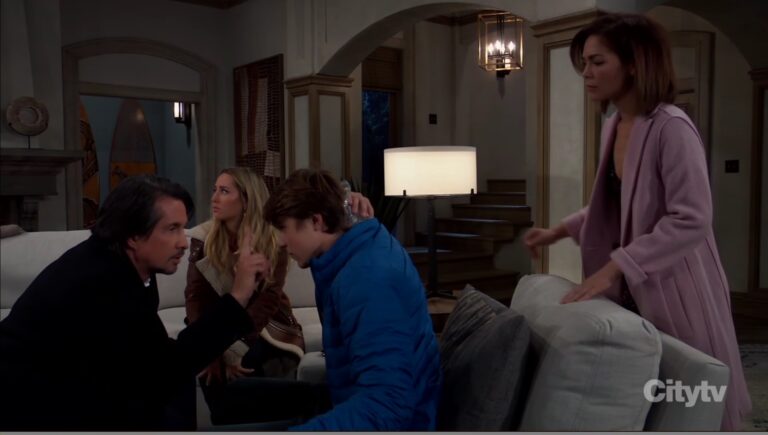 SoapsSpoilers’ General Hospital recap for the Wednesday, January 19, 2022 episode. Today, it turns out that Marshall’s fine, but Epiphany thinks something is going on, while Carly rants to Sam about her marriage and Nina, and Cam gets hit by accident. We also have Tuesday’s GH recap where Brook Lynn’s feelings were hurt when Chase trashed her, and Marshall collapsed.

Chase and Dante work out at the gym when Dante asks about what’s going on with him and Brook Lynn. Chase says one moment they’re fine and the next… He trails off and they agree to go get a beer. Sonny strolls in all tough. “We need to talk,” he tells Chase.

He asks if Chase hit Valentin. Chase says it isn’t his finest moment. Sonny questions if he’s with Brook Lynn. Chase says they’re not an item. He asks if she’s not good enough for him and Dante defends Chase. Chase goes to shower and Dante says, “What was that?”

Sonny shrugs. Dante reminds his dad that Brook Lynn is an adult. He should focus on his own life. Sonny’s just looking out for his family. He complains that everyone’s upset about something he did when he was Mike. He needs to clear his head. He starts in on the punching bag and Chase returns.

In her new bedroom at Jax’s, Brook Lynn flashes to Chase telling Dante he can’t trust her. She’s bummed out but wonders why she cares. There are a lot of guys out there. She goes to jump on an app when she hears a noise. “Chase?”

She has no battery left on her phone so grabs a vase from a box and heads to find out what the noise is. She sees someone and hits them over the head with the vase. The person goes down and she gasps.

Back at the gym, Chase gets a call and tells the person to hang tight. He’ll be right there. He runs off as Sonny punches the bag and Dante decides to stick around. Dante gets Sonny to talk. He explains it’s not going to work with Carly out of the house.

Dante reminds him he said he’d give her space. Sonny doesn’t think Carly wants to see what’s right in front of her. Sonny thinks Carly should understand how he feels since she fell for Jason. What’s the difference between that and his feelings for Nina?

Dante says they thought he was dead and in their eyes, there was no betrayal. Nina lied about Sonny being alive and meanwhile, he didn’t tell the truth. Sonny repeats himself that there was too much going on. Dante thinks that bottom line, he needs to give Carly space. This upsets Sonny even more and he rants that he can’t.

At the hospital, Curtis and Portia talk to Finn and Liz about Marshall. They try to remain positive about how he’s doing. Curtis beats himself up about interrogating his father. Portia talks him down. The doctor shows up.

Marshall didn’t have a heart attack. His blood pressure was high. He can be discharged as soon as his new medication is ready. Curtis thanks everyone for waiting with him. Portia takes off to care for a patient and Curtis calls TJ to update him. Epiphany tells Liz and Finn that something isn’t tracking.

She takes off, leaving them confused. Finn asks Liz if she wants to continue their date. They smile at one another and agree to go back out until Cameron calls with news that startles Liz.

By the hub, Epiphany tries to tell Dr. Rose to do more tests on Marshall and he barks that he’s the doctor, implying that she’s just a nurse. Meanwhile, Curtis goes to Marshall to question what happened. Marshall yells at his son to leave it alone.

Curtis is confused and annoyed. He needs to know his medical history in case it’s something that could affect him. Marshall balks at answering.

Later, Epiphany goes to Marshall to try to get him to discuss his health.  He refuses. In another room, Curtis tells Portia that he’s still at an impasse with his father. She’s supportive. Curtis is frustrated but still wants his dad in his life.

At Metro Court, Carly looks at Jason’s phone number before Sam shows up with beer. “Thirsty?” Spinelli told her she was down. She knows she’d rather talk to Jason. She can’t replace him. The kids are at Monica’s for the night, so she is all hers. They crack a beer.

Carly starts her yelling about her marriage, Nina stealing months from his life and Sonny falling for her. She finally stops yelling and Sam thinks she has held this in since the hearing. Carly thinks she has and wonders how she can believe Sonny still loves her when he still has a place in his heart for the woman who hurt her so.

She talks about agreeing to leave her feelings for Jason behind. Sam looks away and Carly apologizes. She talks about her deep, aching sadness and that she’s unsure if her family can recover.

She says she and Jason shut that door down when her husband returned home, but Sonny keeps defending Nina. Sam says Nina’s in the wrong but Sonny’s making her feel like it’s her attacking Nina.

Carly wants Sonny to stick up for her and since he’s not, “What does that say about our marriage?” Sam tries to tell her she’s “not the bad guy” and that she’s entitled to feel all these emotions. She goes.

Downstairs, Shawn and Alexis drink to their new partnership. Alexis calls Willow over and invites her to sit. She’s clearly uncomfortable. She goes to the bar and Alexis follows. Willow knows Shawn dislikes her. Alexis thinks Shawn will come around.

Willow gets her order and goes and Shawn reminds Alexis of what Harmony did to her  girls. Alexis knows but finds she’s also a victim. In the end, she realizes she can’t remain friends with Willow.

Back at Jax’s house, Brook Lynn explains to Cam, Joss, Liz, Chase and Finn that she hit Cam over the head with a vase after hearing noises. Joss is sorry. They didn’t know that her dad’s house wasn’t empty. Everyone files out and Chase asks why she called him.

She was alone in a strange house where they’re protecting a baby from a psycho. “You told me to go work out!” He tells her. She admits, “Not because I wanted you to.”  They have some wine in front of the fire and he asks how she called since her phone died. He’s surprised that she memorized his phone number. “For real?”

She had to memorize important numbers. He says, “Really.” They stare at each other and she flashes back to him revealing to Dante he can’t trust her. She tells him she has to go to bed. He seems disappointed and she takes off.

At home, Finn goes off to the kitchen with Liz where they agree to another date at another time. They kiss. In the living room, Joss tells Cam she had a good night up until the vase debacle. Cam tells Joss they’ll try again at the cabin.

She says they just have to avoid Esme, Spencer and Trina. Later, Joss is gone when Cam apologizes to his mom about her date ending too fast. She’s just glad he needs her. She asks, “You and Josslyn are being safe, right?” It’s his cue to leave and he gets up. She can’t wait to talk about it in the morning.

In the morning, Dante shows up and tells her something terrible happened and he thought she should know about it.