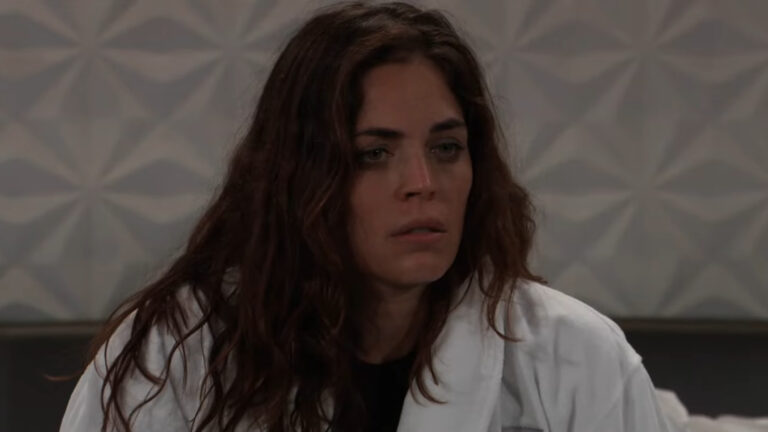 General Hospital recap for Tuesday, June 7, 2022. In today’s GH episode, Dex tells Sonny his territory is being attacked, Carly insists on helping Drew, and Marshall explains his condition to Curtis.

We also have Monday’s GH recap where Willow told Carly she didn’t want to find her biological mother and Marshall told Curtis the truth. 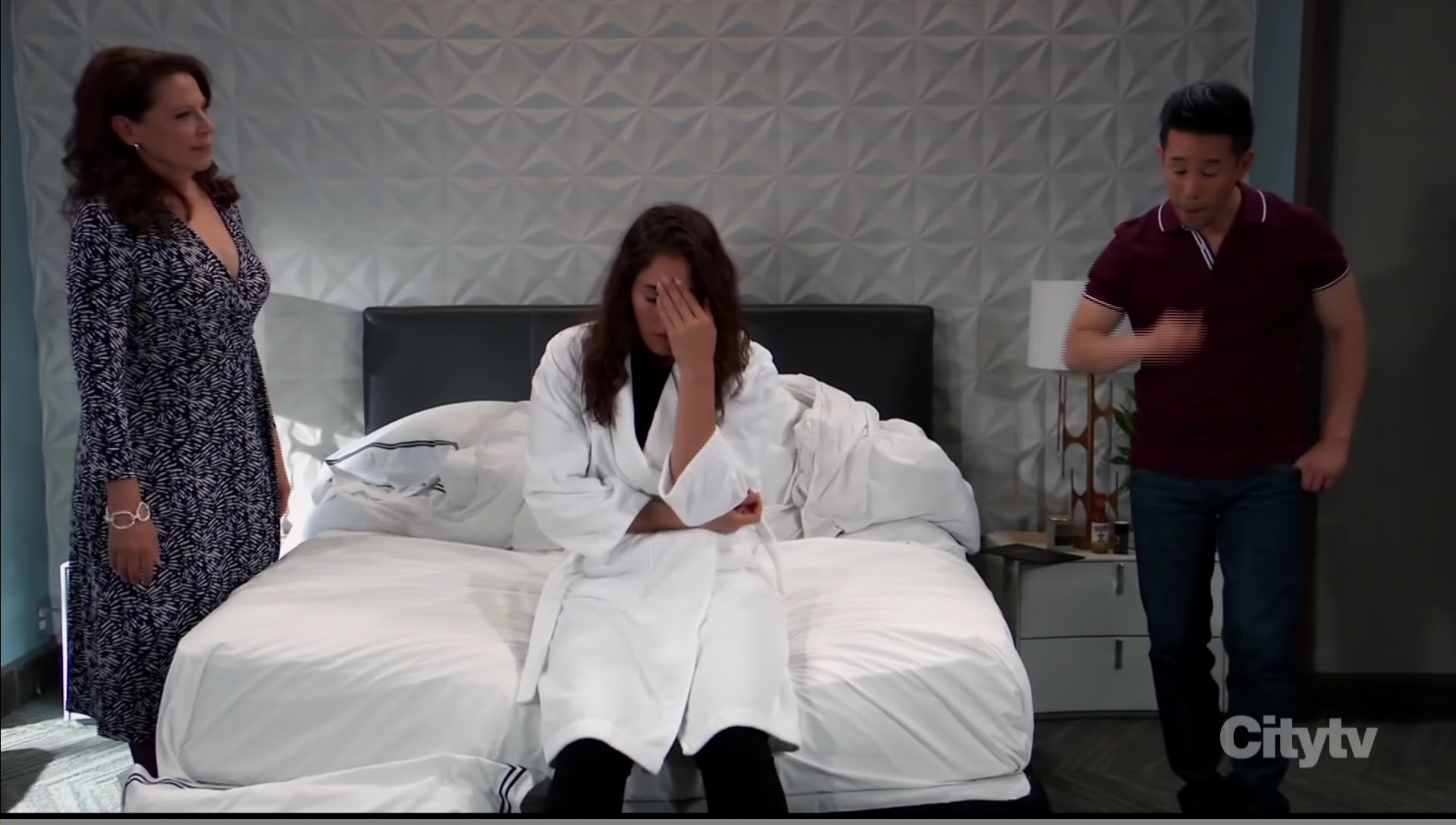 Brad wakes Britt up at the Metro Court and offers the hungover doctor some hair of the dog. Obrecht shows up, promising her daughter some real pain. She tells Britt it’s time for a course correction.

“Welcome to your intervention,” Brad announces. Britt tries chasing them out but fails. Brad warns her that her reputation is about to take a dive. The doctor thinks they are being melodramatic.

Obrecht reminds her daughter that she was being disorderly in public and ranting. She points out it is all over social media already. “You have become a meme,” Liesl explains, showing her the video that’s been circulating.

Appalled Britt glares over to Brad, who took the video. She attacks him with a pillow. He claims he took it for posterity so one day she can look back on this and laugh.

Brad thinks that having beefcake falling on her is the best thing that could have happened. She hasn’t been her mean but fun self; just mopey and adrift. Britt claims she just had a bad day but her mom points out there have been a string of them.

Brad tells her she is strong and resilient. She should stop bellyaching about the days she has left when she will outlive them all. Britt knowingly looks over at her mother. Obrecht abruptly sends Brad out.

Liesl complains about what a mess the place is. Britt gets back to railing about her impending demise. Her mother is apologetic. Britt knows she means well, even if good intentions are a new concept for her.

She’s tried with the dating thing but wants a break. Her mother explains this has never been about meeting someone. She just wants the few people she cares about to be happy like she is with Scott. She’s not going anywhere near Nina and her “schlemazel.”

Obrecht apologizes for trying to foist romance on her, but she can’t stay away when she can see she is flailing, wallowing, and letting life pass her by.

Britt claims she just has high standards and wants a man she can trust with her darkest secrets… like that she has Huntington’s disease and will die a horrible death. The only guy she knows who could handle that is dead.

Her mother tells her she’s had a year to deal with all that. Her death won’t only affect her. Obrecht never expected to outlive her children and she wakes up grateful for each moment they have together.

At Volonino’s gym, Sonny offers to put Gladys up in her own place. Brando (temporarily played by Brad Schmidt) claims that Sasha is happy to have her at their home.

They hash over the latest between Sonny and Michael. He doesn’t want Brando getting involved and warns him things will only get worse between them. Dex pops up and says they have problems.

Last night’s coffee shipment was held up on the docks. There have been staff changes and someone is cutting into their market. They wonder who could be behind this. Sonny has a pretty good idea.

When Dex leaves to take a call, Sonny tells Brando he thinks his own son has taken a swing at him. He’s going to give Michael some credit for strategy, but complains about how he only makes allowances for himself.

When Sonny steps away, Brando spots that Dex has a gun in his pants. He asks if he can help with anything but Dex claims he has it handled.

When Sonny returns, Brando wants to help make peace but he thinks it’s too late for that.

In the Quartermaine stable, Michael and Ned discuss how Leo is doing. He hands him a horse shoe to decorate the place. They want to talk things out.

Both want Valentin out since he’s not part of the family. However, Ned still doesn’t like Michael and Drew’s offer. He thinks they can do better. Michael tells him to put something other than CEO on the table.

Ned suggests that they share the CEO position with Drew. The three of them could guarantee that ELQ moves forward as a coherent unit. Michael doesn’t think that will appeal to Drew.

They bicker and Ned storms out, contemplating making a call to Valentin.

Once Michael is left alone, Dex shows up with a smirk on his face.

On the patio, Carly urges Drew to let her help him save ELQ from Valentin. He doesn’t think that would go over well with Monica. She’s surprised he’s opposed to this and points out she can buy into Aurora on the market whether he likes it or not.

Drew tells her to let this go. She insists on helping him against his will. He admits he still feels outside of the Quartermaines but she insists he fits right in and everyone looks up to him.

She thinks he’s like the Lila side of the family. Drew takes that as a compliment. Carly still refuses to back off on helping him and Michael. She needs to settle up with him.

He wonders what she owes him. She flashes back to lying about the DNA test and then makes up a series of other reasons she could owe him. He’s always known they would find a way back to their friendship.

They agree to have no more secrets. Drew won’t stand in the way of her investing in Aurora, but wants her to make sure he stays on the Lila side of the Quartermaine spectrum.

At Curtis’ house, Marshall explain that he was diagnosed with schizophrenia when he was in the mental hospital. Curtis expected PTSD, not this. Stella encourages Marshall to explain.

He admits it took him awhile to come around to accepting the diagnosis. Every day he reminds himself of what’s real and walks toward his music. He’s had no break with reality and his meds keep him level.

Curtis worries and tells him the family just wants to help him. His father explains that his mother reluctantly went along with his plan to leave. He was afraid of the man he might have become if he’d stayed.

Marshall talks about how worried he was that he would end up homeless and talking to delusions in public. He was just lucky that he never had a relapse. Curtis thinks they still could have helped him but his father was too worried of how wrong things might have gone.

He was in danger of becoming someone else. He took the meds and took off. “I’m sorry,” he cries, but he didn’t know what else to do.

Marshall is tired. His son double-checks that he’s never had a relapse and then asks why he didn’t come back sooner.

Marshall explains that he has been watching him from afar for years. He kept his distance until he opened a music club and took that as a sign for him to return. But he’s here now and staying. The three of them hug.