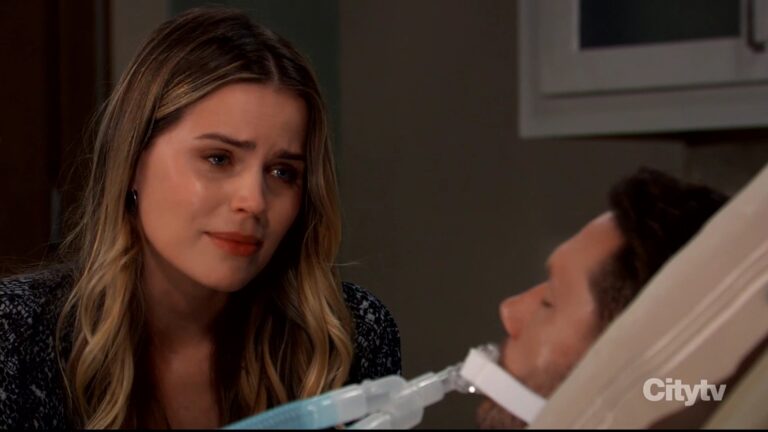 General Hospital recap for Friday, September 15, 2022. In today’s GH episode, Dante is suspicious of Dex, Cody bonds more with Leo, Brad encourages Britt to give Cody another shot, and Portia wonders about Curtis’ feelings for Jordan.

We also have Thursday’s GH recap where Carly was confronted by Payton in Florida, and Brando’s surgery hit complications.

Brad and Britt sit by the pool. She says the pool owes her at least one uneventful day before it closes. He wonders if they will see cowboy Cody. She orders him to fetch mimosas.

After he takes off, Selina pops up and startles her.

The doctor assumes she still wants her to stay away from Brad, but Selina has decided she’s more useful around him.

Britt tells her that Brad won’t be her errand boy forever.

Brad returns and offers his aunt a mimosa.

She doesn’t drink and tells her nephew to enjoy his time off.

Once she’s walked off, Brad tells Britt his aunt is warming up to her.

She says they are just useful to her. He claims things are going well working for his aunt.

She tells him about all the things that have happened with Cody. Brad is sympathetic to him and urges her not to take romantic advice from Maxie.

He keeps encouraging her to take Cody by his horns.

She vents about how Cody might be up to no good and doesn’t seem keen to stick around.

Brad keeps encouraging her to give him a shot.

Dante stops by the stable to see Cody.

He informs him that Brando was attacked last night and asks where he was.

The cop doesn’t think he’s guilty, but Cody needs an alibi. He doesn’t have one.

He doesn’t want to be on the chief’s radar.

Brook Lynn and Leo burst in, and the kid and Cody take off to feed his horse.

She asks Dante about his change of address and congratulates him on moving in with Sam.

After he takes off, Cody and Leo return, and Brook Lynn walks off to take a call.

The kid looks at a trophy Cody won.

Cody gives him a lesson in saddle-sitting and explains how horse competitions work.

He says a horse-trainer on the estate he grew up in was the closest thing to a father he had.

They discuss competitions and Cody offers to take him one. Leo runs off to tell his horse. Brook Lynn returns and tells him how good he is with the kid. They talk about getting second chances.

She assures him everyone in the house is glad he’s there and hopes he sticks around.

Leo returns and tells them how excited he is to get into competition.

He asks Cody to train him and gives him a hug.

Jordan spots Curtis at General Hospital. She tells him how edgy the city is after the latest attack.

He wishes her good luck with that. She wishes him good luck too. “Do I need it?” he asks.

He’s eager to have the divorce papers signed.

The cop asks about all the tension between he and Sonny. She’s wondering if the attacker is going after people involved with Corinthos.

Curtis can’t speak to that. She asks if they are good.

“I honestly am not sure anymore,” he admits. He can’t understand why she didn’t come to him about the divorce papers.

It’s out of character for her to lose a document like that.

She claims she was ill, but he wonders if she has a problem with him getting married.

After he reminds her how important honesty is to him, she asks if Portia knows that.

He claims they have been completely transparent. “If you say so,” she says.

Gladys worries to Sonny and encourages him to use his influence to get an update on Brando.

Sonny wanders off. Dex approaches and informs him he watches Joss dorm room all night and she’s safe.

The mobster is frustrated. Nina shows up and he tells her he wants her safe.

Sasha tells Gladys she can’t believe they are there again. Kristina brings her coffee.

Portia walks out and announces Sonny made it through surgery. He’s strong and in good health.

Sasha guesses there must be bad news too. Portia says there could be sepsis but it’s unlikely.

She allows family only and one at a time in to see him.

Sonny trails after Portia as she walks off and thanks her for how she handled this.

He asks what the chances for his cousin really are.

She can’t tell him but says it’s not unreasonable to be prepared. Praying helps.

They take the elevator up to get breakfast.

When they step off, Curtis and Jordan are still arguing. Curtis hands his fiancee some food and they take off.

Sonny notes that Jordan seems rattled. Dante joins them and gets an update on Brando’s condition.

When the cop wants to question Gladys and Sasha, Sonny tells her they’ve had a rough night and she’ll have to make do with him.

After Dante takes off, Jordan quizzes Sonny about scenarios and asks if he’s had any business problems lately.

He’s the only connection between Brando and Ava.

He remains evasive but she wonders if his family is under attack and this is just the beginning.

In Portia’s office, he admits to her that he and Jordan aren’t getting along.

He’s worried about how she is neglecting her personal life. Portia is sure she’s just busy.

He senses Jordan is holding something back about the divorce papers. Portia doesn’t think she wants him back. But if she did, would that change things for him?

This wasn’t the conversation he imagined he was going to have this morning. They worked hard to be together, but that’s history. Portia is his future. Jordan had too many secrets from him.

She asks if he would still be with Jordan if she was honest with him about everything.

Dex joins Kristina in the waiting area. She admits she’s still freaked out.

After he checks that she didn’t see the attacker, he tells her about combat, and admits that he’s not as unruffled dealing with violence as he seems.

They talk about coffee until Dante interrupts and checks on his sister.

He notes Dex seems to be everywhere these days and mentions he caught him threatening Michael.

Dex says they have worked all that out and there was just as a misunderstanding.

The cop notes he’s always around when something happens. Kristina decides to take him away.

Nina walks Sasha and Gladys to Brando’s room. The mother goes in first.

Sasha turns to Nina for some reassurance.

Gladys sits by her son and says it’s like when she brought him home as a newborn. She was afraid to hurt him but this time he’s already hurt. “Tell me who hurt you sweetheart,” she begs.

After she exits, Sasha goes in.

Sasha takes Brando’s hand and tells him she knows how exhausting it must be for him to look after everyone. She needs him to fight for her and push through this.

If he does, she will do everything she has to to get better.

Taking his hand, she tells him she believes in him. She’s sorry for all the time she wasted pushing him away.

Crying, she begs him to come back. His hand grips hers and his eyes open.