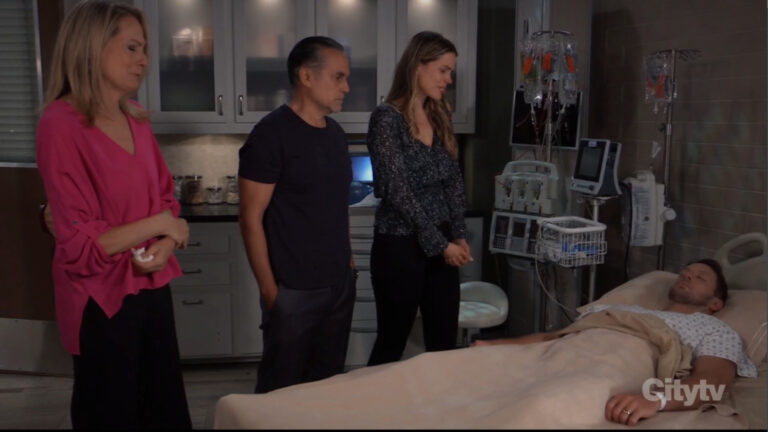 General Hospital recap for Tuesday, September 20, 2022. In today’s GH episode, Alexis and Gregory discuss her plan to lure the killer out, Carly decides to stay in Florida after what she learns, and Liz remembers more details.

We also have Monday’s GH recap where Brando had a seizure, Kevin hypnotized Liz and recovered another memory, and Joss confronted a man watching her.

She’s been delaying this and recalls how she left to head to Port Charles to claim the life she thought she deserved and the social status she thought was owed her.

She’s lost all that and is back to where she started. In Jacksonville, she’ll always just be the person who resentfully wants more.

She wishes she’d listen to her assurances that she was good the way she was.

Carly tells her about seeing Reese’s mother and recalls how she used to talk about her and how amazing she was.

She only hopes that she never told her mom that she was better than her.

“I was so wrong about so many things, mom,” she sobs, sorry she never saw how amazing she was.

The night watchman interrupts. He explains the city has declared eminent domain and will be moving the graves to put in a parkway. She’s going to need to move her mom.

Carly was never notified. He checks the records but only Jason was listed. “These people aren’t going to get away with this!” she declares.

Carly storms into a restaurant and confronts Payton, telling her that no one will disturb her mother’s resting place.

Payton advises her to hop the flight to Aruba and never come back.

Carly says she’s staying and fighting for her mother.

At General Hospital, Jordan asks Curtis if he thinks she would sabotage his happiness.

He wants a straight answer.

She flashes back to Stella admitting that she stole the divorce papers and prevented them being filed, but claims she never saw the papers.

Curtis wonders if they would still be married if there were no papers.

She reminds him that she’s not the one who ended their marriage. He loved her too, but he couldn’t live with her lies and secrets. It was like he was never on solid ground with her.

She wonders if he feels like he’s on solid ground with Portia. She won’t explain her doubts but hopes he gets everything he wants.

Stella finds TJ. They were supposed to have dinner, but things have been crazy for him.

He tells her about Brando. They are relieved he’s okay.

They bump into Jordan and Curtis.

In his office, Kevin has Liz under hypnosis. She recalls the woman at the bottom of the stairs who she told to stay away from her father.

With some pushing, the memory turns into her finding Peter’s body.

Kevin takes her out of hypnosis, and she rushes out.

In the hall, Finn chats with his father and Alexis about the hook on the loose. Finn wonders if the public has the right to know about this.

He gets them coffee and they chat about an upcoming panel at PCU.

They bicker and he gives her advice on how to handle the attacks.

She thinks they need to write an open letter to the person terrorizing the town.

When she says it worked for Jack the Ripper, he reminds her they never caught him.

He’s intrigued by the idea.

Liz tracks down Finn and gives him a hug. She tells him she’s an excellent liar. What happened with Peter seems to have triggered this other memory.

Nina assures Sonny that Brando is a strong guy and will make it through.

Sonny says he’s amazing. Gladys rushes over in tears, relieved that her son is alive. He hugs her.

As Sonny waits around, he runs into an old man named George. When they chat about life, Sonny tells him that everyone’s life matters.

“What are you? A priest?” George asks. Sonny laughs.

When George wakes up, he tells Sonny he’s needed. Sonny jogs off.

In Brando’s room, he begins convulsing so Sasha calls for the doctor as his machines ring.

Portia and some nurses rush in and get to work but his pulse is dropping.

Sasha stands outside and prays, flashing back through her life with Brando.

Portia tells the nurses this makes no sense.

Sasha sits and looks at photos of her husband on her phone. Sobbing, she says they have wasted so much time together and prays that they will have another chance to make beautiful memories.

The lights flicker. Portia comes out. Sasha starts freaking out.

Gladys and Nina join them, and Portia explains there were complications.

Sasha falls on the floor crying. They get her on the couch as Sonny wanders over.

When she walks off, Sonny follows and asks to see Brando. As he goes in, the nurse tells him his cousin is at peace now.

They leave him alone. “You left us way too soon, buddy,” Sonny says, promising to take care of Sasha and his mother.

Sonny brings Sasha in and stands by her so she can say goodbye. Gladys and Nina follow, and they all stand silently around the body.

After Portia tells TJ, Stella, Jordan and Curtis about Brando dying, the doctor is shocked.

This doesn’t make any medical sense. Stella tells him sometimes there are no reasons. They hold hands and pray for Brando.

Portia finds Finn for a consult. When they step into his office, she asks him to look at Brando’s file and explain how he could have died.

She can’t help but think there may be a sinister explanation for why he died like this.

After overhearing from some nurses that Brando is dead, Alexis and Gregory decide to go ahead with her plan.

Liz runs to Kevin’s office and tells him that Finn mentioned mountain climbing. That suggested something to her and she wonders if her father was involved in the woman falling.