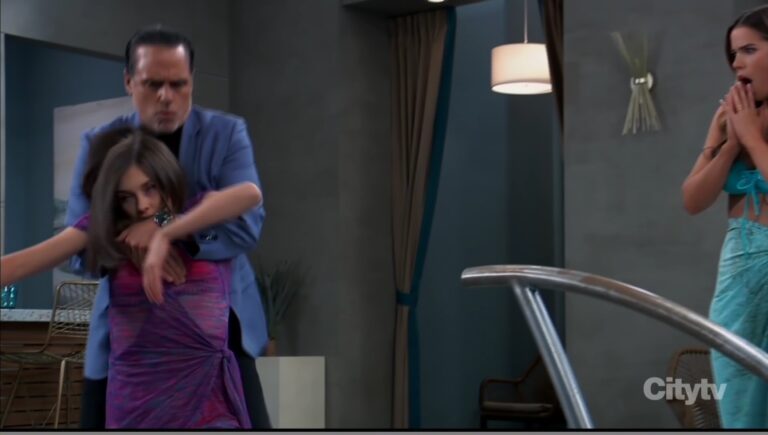 General Hospital recap for Monday, June 27, 2022. In today’s GH episode, Carly’s happy that things are going well, while the word of the merger starts coming out and Valentin’s already gloating. Meanwhile, Willow’s illness is more prevalent and she faints into Sonny’s arms.

We also have Friday’s GH recap where Carly told Olivia about her stake in Aurora and Jordan asked Linc not to press charges.

At the Quartermaine house, Lucy comes between Michael, and Ned and Valentin. She reminds them that what just happened is business. Michael argues that it’s “blood.”

Valentin says it’s time to think of the good of the company. He votes to make Ned Chairman of the board.

Ned, Lucy and Valentin raise their hands at the motion and Drew finally raises his, in the spirit of family. Lucy takes a photo. Michael orders Willow to go sun herself and Lucy offers to drive her.

Drew guesses that Willow doesn’t want favors from her. Willow takes off and Lucy says Lily would have wanted to see them work together. Drew tells her to quit while she’s ahead.

Her and Valentin take off. Valentin calls Marty to tell him the good news. The merger between Aurora and ELQ is officially dead.

Back inside, the arguing continues. Drew thought that Ned wanted to take ELQ back from Valentin. Ned agrees he felt that way at the time. Drew gripes that he put Aurora on the line. “You screwed me over!”

Ned yells that he’s given years of his life at ELQ. Michael says so has he. He learned on the job, the company was profitable and while Ned was gone, he lost ELQ to Valentin.

They recap this and Drew thinks Valentin will double-cross Ned.

At Kelly’s, Brook Lynn asks Chase to say something. He’s so quiet, she thinks he’s disappointed in her. It reminds her of her dad. Whatever she said, “You’re not alone,” BLQ says.

He says sitting across the desk from the commissioner felt 1000 times worse. He wishes he would have learned his lesson after hitting Michael. He says that Linc agreed not to press charges, but his problems are just beginning.

He can’t go back to work, indefinitely. They need to decide if he’s fit to wear a badge again.

He has to face the renewal board. If they decide against it, he has to find a new career. He’s thinking of saving them the trouble. BLQ tells him he’s not quitting. She’ll fix it with Linc.

She’ll sign a contract and do what it takes to get Chase out of this. He refuses to let her do that.

He asks her to help her family save their business, so she reluctantly goes. Outside, she makes a call to someone for help.

Sonny arrives at the garage to see Brando. He brought his “vintage ’61 corvette” for him to take care of. Dex wanders in at Sonny’s behest as Sonny says Brando will “make it purr. Right Dex?”

Dex agrees and Brando asks what’s going on. Sonny doesn’t want competition. He calls Brando family and asks Dex to learn the ropes from him. Sonny will bring Dex in at his own pace. He sends Dex to his car for his sunglasses and once the goon has left, Brando asks if Sonny trusts Dex after he went after Michael. Sonny gave him a talking to but says things with Michael are worse. He’s using his business to undermine him.

Dex returns with the sunglasses and Sonny takes off while Dex wants to get something settled between the men. He explains why he went after Michael, though it’s all a lie. He asks to hit the reset button. Brando agrees and leaves to see the car while Dex takes a call from Michael.

Nina arrives poolside and Olivia storms over and tells her to go. Nina runs up a sizable tab when she meets someone for business, which is what she’s doing today.

Olivia says to cut the crap. Sasha appears and intervenes. She invited Nina. If she’s not wanted there, they’ll both go. Olivia reminds Sasha of Nina’s past wrongdoings and tells Sasha to proceed with caution.

She leaves and Sasha expresses her sorrow for the judge ruling against Nina.

Nina says Scott warned him that Willow and Michael would attack her character. She did the same. She fills Sasha in on what the judge declared, that she can’t see Wiley and how she almost left Port Charles.

She reveals she went to Nelle’s grave to apologize to her for missing the chance to be with her when she was alive. Her heart necklace fell off and she returned to get it.

Sonny was there, looking for her. Sonny stopped her from leaving for Wiley’s sake. They hold hands and Sasha asks if he wasn’t part of the reason she stayed.

Willow arrives and Olivia asks how the meeting went. Willow cringes and asks her to talk to Ned. Olivia worries and takes off. Sasha sees Willow and notices she looks terrible.

Nina asks her to take her chair and orders an ice tea for her.

Willow explains that someone turned their back against Michael. Nina asks if it included Wiley. She tells him to ask Valentin. Sonny pops in and questions her.

Willow begins to sweat and has a hard time catching her breath. She faints in Sonny’s arms.

At Metro Court, Carly happily tells Joss and Bobbie that Michael’s ensuring their future is bright. She can’t wait for Aurora stock to take off. She’s happy Drew and Michael will be working together.

She’s happy she could help that and calls it money well spent. She gushes that she couldn’t be prouder or more hopeful of their future.

Talk turns to the hearing and how Michael kept his cool. Joss laughs. She wouldn’t have done so. Carly says Michael stayed calm like Jason and then admits Drew could be calm, too.

Bobbie can’t believe they’re all sitting at Carly’s hotel. Joss thinks about Trina, who could get expelled from PCU.

Carly’s exasperated since Trina did nothing wrong. Joss wanted to talk to Michael or Dad and then thinks now, Carly might be able to help her because of this merger.

When Carly’s broker calls, she ignores the call, wanting to focus on family. “Good news can always wait.” Later, Bobbie leaves and Valentin arrives at the table.

He gloats as he asks for a few steaks and some champagne to be sent to his table. He leaves Carly and Joss curious. “He sounds like he’s celebrating something.”

They assume he should be feeling beaten down.

Back at Kelly’s, Violet and Gregory show up, surprising Chase. They claim they got tired of camping but he can tell Brook Lynn called them.

Gregory’s worried. Violet asks why he’s sad. He admits he let some people down.

Olivia and Brook Lynn rush into the Q house and learn that Ned’s the new Chairman of the Board at ELQ. “Otherwise known as Valentin’s right-hand man,” Drew says, causing the women’s mouths to drop.

He looks at his phone and says Aurora stock is plummeting. He leaves to do “damage control.” Meanwhile, Brook Lynn yells at her dad, blaming him.

She runs upstairs and Olivia asks what the hell he did.

Drew arrives at Metro Court and eavesdrops on Carly and Joss’ conversation about Trina. Joss gets a text and runs off.

Drew appears and takes a deep breath before letting her know he has terrible news.