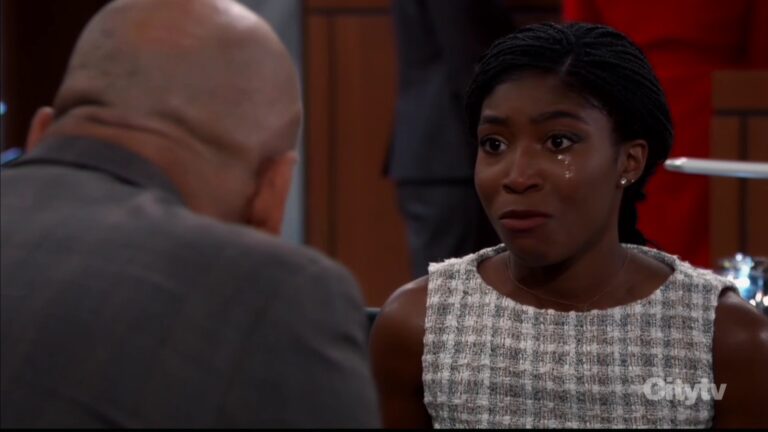 What’s coming up on General Hospital this week? Jordan questions Curtis, TJ has some potentially disturbing news for Willow, and Michael makes a mysterious call.

Relationships are torn apart as Esme sets her sights on Nikolas and Ava, the friction between Sonny and Nina intensifies, and Sasha snaps at Brando. Check out the spoiler video for more.

Sonny works over Felty until someone unexpected appears.

Joss finds Sonny and Dex beating on Felty and records it. She threatens to bring them to the cops.

Valentin makes a romantic gesture, but Anna tells him she can’t deal with his dishonesty anymore.

Valentin tells Anna as much as he can about his whereabouts while he was supposed to be at the clinic.

Spencer approaches Ava and Nikolas about something important.

TJ and Molly share a close moment until they see a patient is brought into GH.

Oz codes and TJ’s forced to put him into a coma when there’s pressure on his brain.

As time is running out, Spencer pressures Esme to take him up on his deal.

Trina receives support as she braces for a new day of her trial to begin.

Rory attends trial as a friend, but is told that it won’t look good if he stays.

Joss barks about what Sonny has done.

Carly learns that her daughter fell at the park.

Sonny and Nina talk out some tough truths.

Nina wonders if she and Sonny are going too fast.

Trina is surprised by an unexpected witness at her trial.

Jordan, in a race against time to help Trina, goes to Wyndemere.

Trina lashes out at Spencer after he’s deposed.

Victor wonders what has Nikolas on edge.

Victor wants to kill Esme. Nik can’t do it.

Esme asks who her mother is. Ryan doesn’t know her name.

Esme almost spills the beans about her and Nikolas having sex.

Nikolas rushes to the courthouse to try to get there before the truth is revealed.

Nikolas finally reveals the truth to Ava that he had sex with Esme.

Diane sees an opening in Trina’s case as a new witness is called to the stand.

Esme is called to the stand.

Michael and Willow are surprised when Sasha admits she already knows about the pregnancy.

Dex tells Sonny he knows he can do more.

Dex thinks Sonny’s still got it.

Mac makes a suggestion to Dante about his career, prompting him to take action regarding his future with Sam.

Mac wants Dante to take over for him when he retires.

Sonny and Brick discuss Dex’s role in the organization, and ways to assess if he’s ready to step up.

Willow gets another blood test to confirm TJ’s suspicions.

Spencer admits he was with Trina when the video went out.

Esme gets ready to leave town.

Sasha and Willow share a warm moment of support for each other before tensions heighten for them both.

Brando finds Michael with Dex, and suggests they go to Sonny.

Brando tells Sasha that she needs to talk to a doctor about her addiction and deal with the root cause.

Sasha thinks Brando doesn’t trust her but he knows how addicts think.