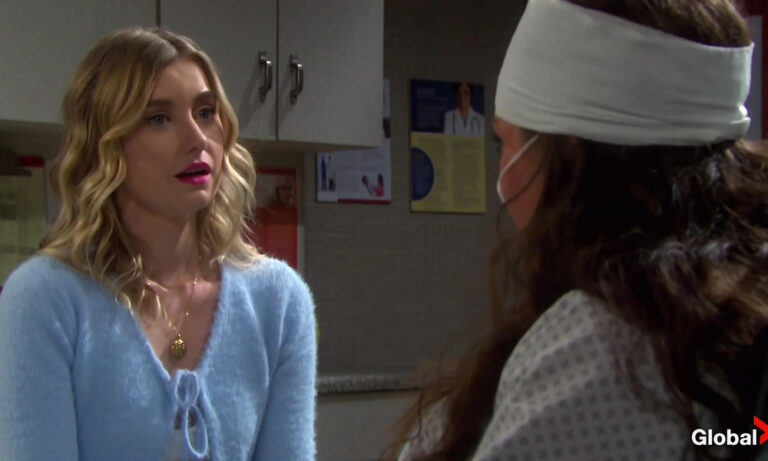 Soaps Spoilers is back with all new Days spoilers for the week of March 15-19.

Aunt Paulina came into Salem like a hurricane blowing through town. She was outspoken and strong. She made a mistake in thinking Lani was asking her to become godmother to one of the babies. Meanwhile, Claire ran into Evan at Ben’s place and when she realized who he was, Evan pulled a gun. While Xander and Jack had their bachelor party, and Chloe tried to tell Brady how she felt about him. It’s almost Sarah and Xander’s wedding day and oops! Rex tried to ruin the bachelor party while Kristen was outed by Sarah and paid for finding out her secret.

Sarah worries how far Kristen will go to keep her secret.
Xander is concerned that Sarah’s MIA.
An anxious Ben waits with Marlena for word on Ciara.
Claire sees Theo and they catch up.
Julie goes bananas seeing Xander on her sofa.

Victoria Konefal speaks out about her Days of our Lives contract, setting the record straight.

Ciara reunites with her loved ones.
Sami confesses the truth to Lucas.
Ben has a setback.

Days recap – Gabi is on to Ava and thinks she murdered Charlie.

Gabi clashes with Ava. She saw Ava leave the house the night Charlie died.
Rafe pursues another murder suspect in Charlie’s case. Kate.
Kate’s gun goes missing.
Jake dreams about Gabi coming on to him.
The DiMera household gets a new set.

Days recap – Rex gets into bed with Kristen unknowingly.

Kristen reveals dastardly plans to Sarah.
Chloe and Brady encourage Rex to fight for Sarah.
Ciara lashes out at Claire.
Ciara can’t recall anything past her motorcycle accident
Kristen as Sarah kisses Rex and gets him into bed, without his consent. He thinks she’s Sarah.
Xander who he thinks is his bride-to-be in a compromising position.

Kyle Lowder is done at Days of our Lives.

Xander is in for a shock.
Jack learns Abby kidnapped Gwen.
Chad tells Abby that her hate for Gwen has gotten out of control.
Jake’s confident he knows the true reason why Gabi moved into the DiMera household.

Watch the Days video spoiler from Days of our Lives Promo on YouTube below.

A dejected Xander finds a gift from Sarah. The new sporran for his kilt.
Chad grills Jake.
Jules and Carver’s christening day arrives.
Roman makes a surprising declaration to Kate.
Claire and Theo catch up.
Kristen gets a brilliant idea.
Kristen puts on a Sarah mask and takes over her life, telling Xander she doesn’t want him.