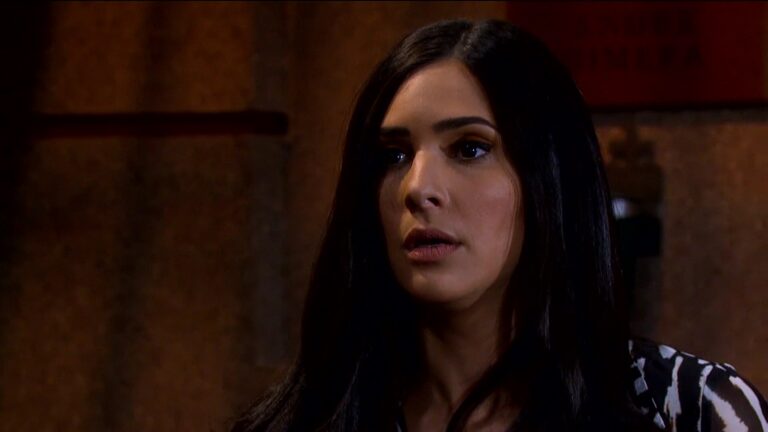 First, take a look at the Days August 29 – September 2 spoilers.

Then check below for what’s coming up the week after! What’s ahead includes Maggie learning Jennifer’s secret, Stephanie delivering surprising news to Abe, and Ava being disturbed in the DiMera crypt.

Days of our Lives moves to Peacock September 12

How viewers can still watch Days of our Lives after it moves to Peacock whether you’re in USA, Canada or Australia.

Days of our Lives Recap for Monday, Sept. 5!

Chad and Stephanie talk about how strong Sonny is. Stephaine is sure he’ll pull through this.

Leo has a terrible dream that Chad has the knife that killed Abby and he stabs him with it.

Leo wakes up and calls the hospital, pretending to be Alex, while he asks after Sonny.

Leo’s happy that Sonny will be fine.

Will hurries home as Sonny battles for his life.

Will turns up and Justin is singing to Sonny.

Justin and Will talk about how Sonny is going to pull through. “He has to,” Will says.

Maggie learns the secret Jennifer has been keeping.

Jennifer is taking pills to get through her pain over losing Abby.

Rafe shows Sloan the list of people he was out to get. Abby and Sonny’s names were crossed off. Sloan calls it circumstantial.

Sonny’s vitals improve now that Will is home.

Stephanie writes a press release on Alex and he thinks it makes him sound sexy.

Maggie confronts Jennifer about the pills and Jenn drops them in the trash.

Leo packs to leave Salem as he tries to think of who is framing him.

Days of our Lives recap!

Sarah’s ready to see if she can get her job reinstated at the hospital.

Xander believes Sarah will get her old job back.

Xander and Sarah decide to get married immediately.

Rafe tells Sloan to stop lying about Leo and grabs her.

Trask says Rafe’s on Leo’s case and knows where Leo is right now.

Gwen is released from jail much to Chad’s chagrin.

Sonny wakes up to Leo in scrubs and a funky wig and asks if they’re the nurse. Leo says, “Bitch please, it’s me.”

Leo makes his case to Sonny. He didn’t stab him.

Jennifer fishes for her pills from the trash and hides them in her hand when Jack arrives home.

Jack confronts Jennifer about her pills and she lies about Kayla giving her medication for headaches. He buys it and they embrace.

Jack tells Jennifer about hiring a lawyer for Gwen. He makes excuses for his daughter and asks his wife to understand.

Jack explains that Sonny was stabbed when Gwen was in jail. Jack thinks Leo set Gwen up. He knows his kid is no saint but thinks she deserves more from him. Jennifer decides that she can be forgiving.

Xander and Sarah arrive at Alice’s place in their wedding finest and ask Jack and Jennifer to witness their wedding. Maggie will meet them at City Hall but Jenn offers the Horton house since it’s Sarah’s family home too.

Jenn provides flowers and her and Maggie decorate. Jack’s grateful to Xander since it’s the first time Jenn has smiled in a while.

Gwen walks in just before the wedding begins. She’s there when the duo marries and later, goes back to her room wondering why it’s been wrecked.

Sloan lets Rafe know that Leo’s on his way to the hospital. Rafe gets there but Leo’s long gone. Nurse Leona has left.

How viewers can still watch Days of our Lives after it moves to Peacock whether you’re in USA, Canada or Australia.

Wednesday’s Days of our Lives recap!

Marlena gets pampered as John gives her a day of romance.

John and Marlena have sex and afterward, talk about how they have faced a lifetime of challenges and that they’ve always come out on top and stronger than ever.

Marlena thinks the police or the FBI will find Orpheus before he does more damage.

Stephanie has some surprising news for Abe and Paulina about his campaign for governor.

Steve tells Jada that they couldn’t call the cops or Orpheus would have killed their wives. Jada thinks they’d have had Orpheus in custody if Steve had called them.

Rolf tells Orpheus that he’s conditioning Stefan but insists it’s not his business.

Orpheus wants something from Rolf and reminds him it’s payback time since he got him pardoned.

Kate tells Eric that Roman and Allie have forgiven her for knowing Lucas kidnapped Sami. She tells him that Marlena has forgiven her as well and she’s paying for what she did.

Kate tells Eric she’s sorry for pushing him toward Nicole. She wants him to find the happiness that she’s found in Roman.

Paulina and Abe learn from Stephanie that the numbers for Abe running for governor are low. People like Abe but want to talk about Paulina, so Paulina thinks she’s holding Abe back. She thinks a divorce would solve that. Abe refuses.

As Kayla’s kissing Steve and thanking him for saving her life, Stephanie arrives and demands to know why her father didn’t tell her that her mom was kidnapped.

Thursday’s Days of our Lives recap!

Anna and Tony ask if Johnny’s okay. He’s fine, he guesses. She hopes he wasn’t traumatized by EJ’s behavior.

Johnny talks about having a service for Jake. He invites everyone. He tells Ava in person. She calls it sweet and EJ walks in on them sitting on her bed. He thinks she’s going through all of the DiMera men.

Johnny tells EJ that he can’t steamroll over him.

Rolf tells an unconscious Stefan that he’ll only have Chloe on his mind once he’s up.

Li takes his dad to the airport and goes to Gabi, who hopes his dad had a nice time in Salem.

Kristen orders Rolf to wake Stefan and he does so. Stefan thinks he’s in love with Chloe.

Kristen tells Stefan to rush back to Chloe and get her into his bed.

EJ wants to discuss his son with Ava and what he’s doing with her.

Johnny has a close moment with Ava.

Johnny calls Gabi to come to the crypt for the memorial.

Chloe rants about dealing with Kristen and Brady feels bad and blames himself for getting involved with her in the first place.

Chloe talks about testifying tomorrow in the custody case.

As Brady and Chloe are in bed, Kristen arrives at his hotel room.

Stefan wakes up and goes to the DiMera crypt where he sees the plaque with his name on it.

Ava arrives at the crypt and sees “Jake.”

Days was pre-empted until 1:20 PM today

Reminder that today was the last episode of Days of our Lives on NBC. Here’s how you can watch DOOL whether you’re in USA, Canada or Australia. We’ll also continue our recaps here in our spoilers so you can keep abreast with what’s going on in Salem.

Ava has a disturbing encounter in the DiMera crypt.

Johnny lectures EJ about his treatment of Ava.

Li and Gabi show Tony and Anna her engagement ring.

Stefan arrives home and gets a drink and looks at Stefano’s portrait and drinks to his father.

In the crypt, Gabi talks to Stefan, trying to say goodbye when he walks in. She’s pretty shocked.

Stefan, of course, was brainwashed so he doesn’t see Gabi the way he used to.

Take a look at the promo for what’s to come on Days.