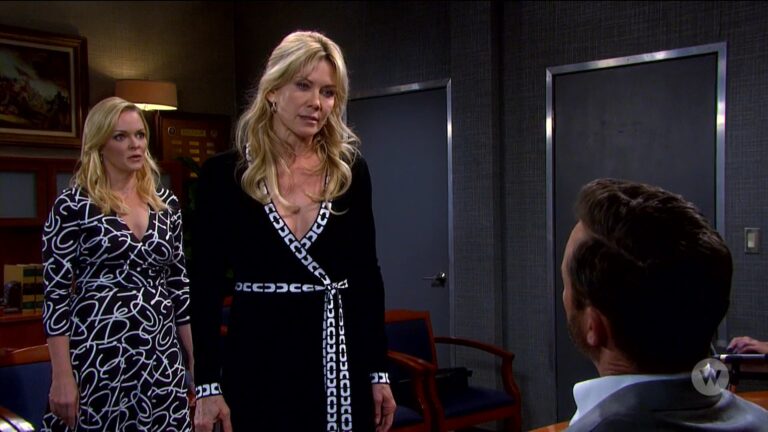 First, take a look at the Days September 5 – 9 spoilers.

Then check below for what’s coming up the week after! Included will be Chloe being shocked by who shows up, EJ catching his son with Ava, Johnny looking for a favor, and Rafe asking Nicole some questions about Eric.

Get even more in the Fall spoilers preview. Then take a look at the spoiler preview for what’s coming!

Don’t forget, Friday was the last day Days of our Lives will be on NBC. The show has moved to streaming on Peacock.

A moving message from Deidre Hall to our Days of our Lives family.
Stream Days of our Lives exclusively on @PeacockTV beginning Monday September 12th. A special $1.99 per month offer (for 12 months) begins on September 1 for a limited time. Terms apply. pic.twitter.com/1nO0xWR59Y

If you are Canadian, find out below how to continue watching.

Days of our Lives recap for Monday September 12!

Gabi is shocked when she comes face-to-face with Stefan in the DiMera crypt. She thinks he’s Jake.

Gabi thinks “Stefan” is lying about who he is especially since his heart was donated to Julie.

Stefan tells Gabi that Rolf brought him back and in turn, gets a kiss. She can’t believe it’s really Stefan. Stefan pulls away. He can’t stand the sight of her.

Chanel and Allie are stunned by Paulina’s news.

Alex asks Stephanie out for a drink.

Stephanie refuses to have a drink with Alex, reminding him it violates HR policies.

Ava and Johnny get in bed and make out. She worries she’s too old for him and they talk about why they shouldn’t do this.

EJ tells Li to leave town and he tells the DiMera he will after Gabi says her goodbyes to Salemites.

Ava tells Johnny she won’t have sex with him just before EJ catches Ava and Johnny in a compromising position. EJ calls Ava a cougar.

Johnny admits to Ava he genuinely likes her.

Li finds Gabi and Stefan in the crypt and tells him about their engagement.

Gabi wants to take Stefan to the hospital to regain his memory but Stefan only wants Chloe back and thinks he was in a happy relationship with her.

Alex goes to Allie and Chanel to lick his wounds as he explains Stephanie dumped him and he’s not used to it.

When Chanel tells him to have a no-strings hookup, he says that thanks to Stephanie, he now has an idea of what he really wants.

Eric and Nicole are in bed together and Nicole tells Eric that Rafe can never know.

Rafe interrupts Nic and Eric to tell them it’s a little late for that.

Eric smiles and Rafe grabs Nicole and asks how she could do this to him.

Rafe has a nightmare that Nicole had sex with Eric.

Rafe tells Nicole he dreamt that he caught her in bed with Eric. Rafe questions Nicole about Eric.

Kate has a cupcake for Roman but then sneezes all over it.

She has a bit of a temperature and Roman urges her to go to the doctor.

Steve gifts Kayla some flowers and she worries they’re poison but he tells her they’re from him, not Orpheus.

John and Marlena wake up in bed together and discuss Orpheus. She needs to go to work. She needs normal. John wishes she’d stay in bed but she has work piling up.

John wants to go to the Inn on the Lake and stroll together.

She likes that idea.

John blames himself for what happened to her and Marlena says they need to stop being afraid and let the cops take care of this.

John and Steve try to figure out how to locate Orpheus.

Eric wakes up next to Jada in bed.

Jada asks if Eric thinks less of her because they slept together so fast and he was a priest.

Eric opens up to Jada.

Kate passes out in the hospital.

Kayla passes out while telling Kate what happened to her.

Kate gets out of bed and they think Orpheus has made them ill.

Meanwhile, Steve and John are at Steve’s and they talk about Orpheus’ motivations.

Marlena passes out in Roman’s arms at the hospital.

Orpheus tells the women he poisoned them.

Days of our Lives Recap September 14!

Orpheus asks Marlena and John if they’re sick of him. He tells them that the women will become much sicker. 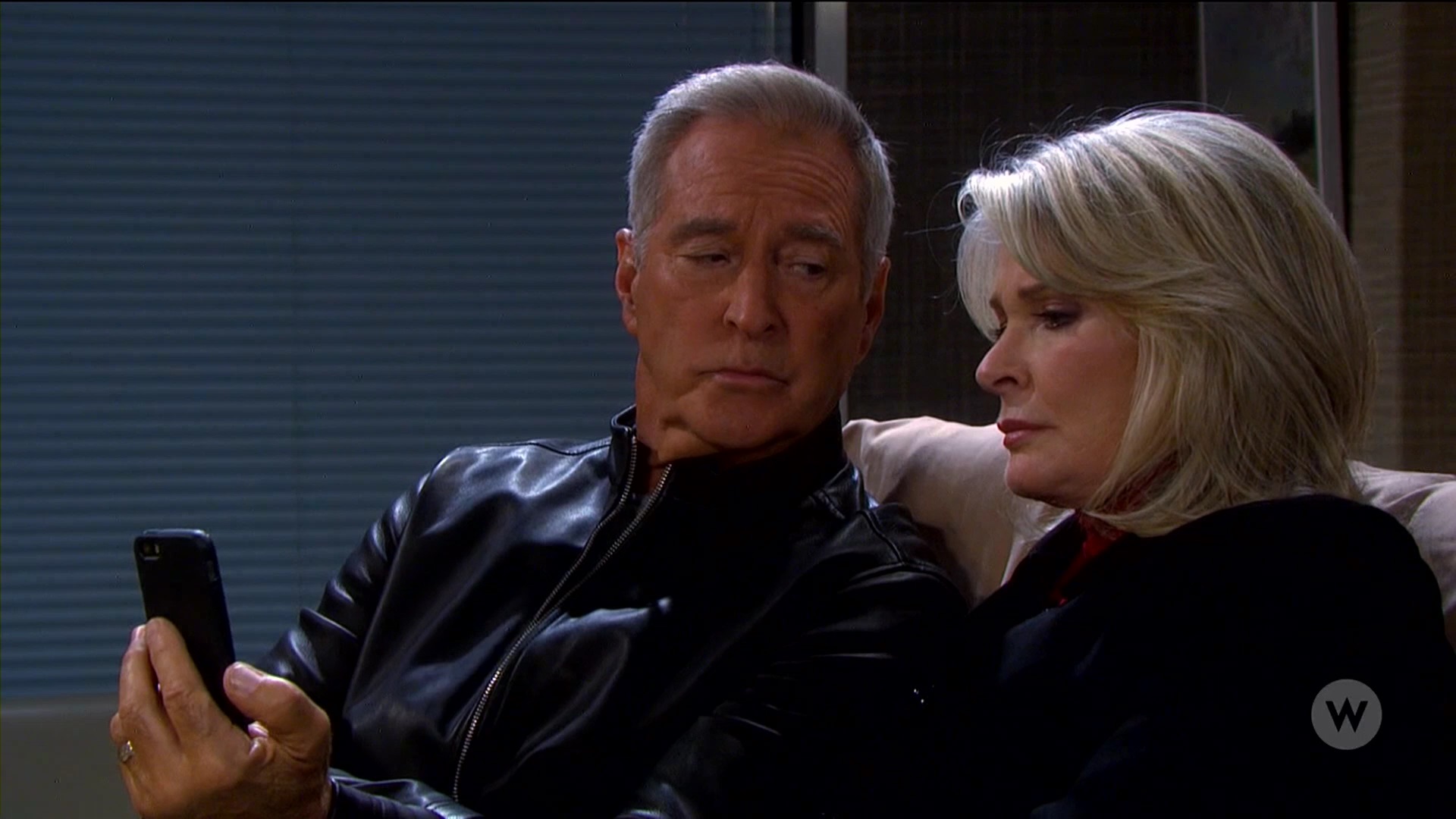 He wishes he could see their reactions as they watch the video.

Roman and Kate, Steve and Kayla watch Orpheus’ video as he taunts them and then reassures them that when he infected them, they’re not contagious.

The men will remain healthy in order to watch their women die.

Sarah and Xander feed each other in bed and Sarah are so happy that it makes her worry that something bad will happen.

Xander and Sarah talk about other things that happened to Xander when Sarah was gone. He reveals he had a one-night stand and flashes back to sex with Nicole.

Xander and Sarah’s wedded bliss comes to a sudden halt. Sarah freaks out that Xander slept with Nicole. “She hates you!” Xander explains how drunk they were and lost and in need.

He even explains how the information came out and Sarah freaks out and judges him.

He reminds her he was in a bad place since he thought she was gone.

She doesn’t like him using her as an excuse and keeps judging. Sarah tells Xander she shouldn’t have married him then stomps off on him.

Nicole does damage control and then entices Eric with an offer.

She tells Chloe that she needs to get Eric to back him up after Jada talked to Rafe about Eric.

Eric catches Nicole in a lie so she covers it up.

Sarah interrupts Nicole and Eric to tell them she just heard about Xander ruining their wedding.

Nicole says they had problems before Xander came along.

Rafe and Jada get a lead on Orpheus.

The truth about Orpheus’s revenge plans starts to become clear.

Kristen finds Li on her way to the custody case. She babbles at him about Stefan not finding Chloe as soon as he left the facility. She needs him to distract Chloe so she can be with Brady.

Li doesn’t know where Stefan went and says Gabi’s a mess and took off at the crack of dawn. Kristen gets it but it doesn’t matter what Gabi wants. She calls Gabi his problem and she has her own battles to fight.

Gabi can’t stop thinking about Stefan and that meeting in the crypt. She goes back there and refuses to let go of fighting for him.

Chanel and Allie make cupcakes while they hope Paulina isn’t going to change their order yet again.

Chanel and Allie argue about Johnny and Ava.

EJ goes to Ava’s hotel room to tell Johnny he will have to come home at some rate.

EJ tells Ava that Johnny’s notoriously untidy. Ava doesn’t care. She asks why he’s there and kicks him out.

Ava and Johnny maintain their charade.

Li finds Stefan in Gabi’s chair at the office.

Belle, Chloe, and Brady are yelled at by the judge who asks where Kristen is. She’s tardy.

Kristen arrives at court late, without a lawyer. “I fired her,” she admits and is representing herself, much to Belle’s shock. Laughter turns to surprise when Kristen calls Chloe to the stand. Kristen asks why Chloe “wants to steal my daughter.”

In the square, Ava and Allie discuss her sleeping with Johnny. Allie calls him vulnerable and doesn’t want him to get hurt again.

EJ talks to Stefano’s portrait, updating ‘it’ on Gabi’s shares in DiMera stock belonging to Stefan now that he’s alive.

EJ wants to get rid of Gabi.

Stefan goes to Chloe’s place and they come face-to-face.

Kristen hurls a shocking accusation against Brady. She calls him a murderer and says he murdered Philip.

Brady’s unable to say anything about Kristen since she was pardoned for her crimes.

Kristen calls Brady an alcoholic and tells the judge she doesn’t want him raising her kid. She wants Chloe out of his life.

The judge adjourns the case until tomorrow.

Belle tries to talk Kristen into a joint custody agreement to which she turns down.

Chloe is stunned to discover Stefan at her door.

Stefan wants Chloe back but she’s in love with Brady.

Stefan says that he thought Gabi was trying to destroy him and he shouldn’t have let her go.

Chloe tells Stefan she’s moved past him and all of that and asks him to leave. Stefan goes but he’s not ready to give her up.

Stefan is surprised that EJ’s happy to see him.

EJ has a proposition for Stefan. He shares his idea of them forming an alliance to take back DiMera. Stefan’s in.

Johnny wants a favor from Allie. He wants to stay with her since Ava kicked him out.

Brady returns to see Chloe in her room at Salem Inn and learns all about Stefan’s visit. Brady believes Kristen’s involved in this new mess.

Ava tells Allie she and Johnny didn’t have sex but Allie still has to worry about her brother, though she apologizes for being insensitive.

Ava thinks of kissing Johnny, when she’s alone at the Bistro.