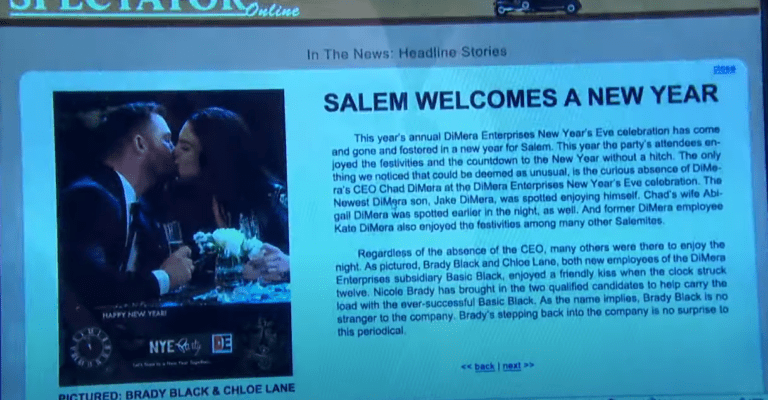 Anger and devastation coming up for Salemites.

Salemites aren’t going to be very happy at least for the foreseeable future. In this week’s Days of our Lives spoiler promo, for January 4 – January 8, Brady goes to visit Kristen in prison, who shows him an article she found online from The Spectator of him kissing Chloe Lane, his ex! That can’t be good. Kristen wouldn’t want to share her man, and it’s tough enough being in prison without feeling jealous. Should Chloe be scared?

Meanwhile, Ben realizes that Claire is in big trouble when Rafe accuses the young man of raping Allie. Ben rushes off to do something about it and just as she and Charlie the rapist are about to have sex at his place, Ben saves the day and winds up saving Claire from sex with a rapist when he walks in on the couple. Ben tells Charlie, “Get the hell away from her.”

Over at the DiMera household, Abigail learns that Chad spent the night with Gwen in bed, and confronts the nanny, yelling, “I don’t want to see you anywhere near me, or my kids, ever again.” But did Chad pass out before anything happened?

Watch the teaser promo on Days of our Lives Promo, below, and comment on what your thoughts are about the upcoming week.