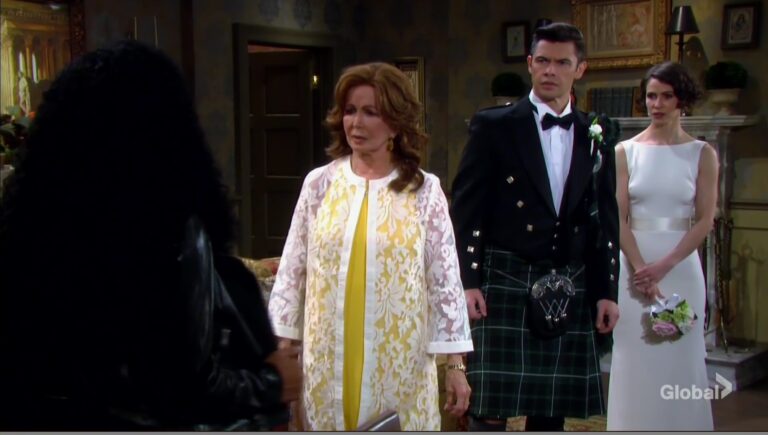 There may be more than a wedding on the way in a hurry and the list of murder suspects grows.

SoapsSpoilers has the Days of our Lives spoilers for the next two weeks. First, take a look at the Days July 11-15 spoilers. Then check below for what’s coming up the week after! We’ll be adding to these daily.

JJ has a confrontation with Lucas.

JJ accuses Lucas of murdering his sister and almost beats him.

Jennifer gets in between JJ and Lucas.

Chad makes a confession to EJ. He reveals what he did to make it look like EJ was the kidnapper.

Will gets an unexpected offer. He’s off to Hollywood.

Sonny is fine with Will leaving Salem. They’ll visit often.

Jada (Elia Cantu) helps Rafe when he needs it. Turns out she’s a potential new hire for SPD.

Xander convinces Sarah that they need to get married right away.

Xander explains to Sarah that he sold her ring to buy one for Gwen, because he thought she was with Rex.

Sarah’s upset with Xander but they move on.

Gwen is not thrilled when she discovers that Kristen DiMera is her cellmate.

Marlena hypnotizes Lucas who remembers what he did the night Abby died.

Johnny pops the question to Chanel after reminding her of how happy they were before the devil came around.

Chanel tells Johnny that so much has happened since the devil wreaked havoc on  Salem.

Lucas shares his findings with Rafe about seeing Sarah run from the manse.

Chad has to decide if he’ll give EJ his shares.

Sarah’s arrested after she admits she went to see Abby the night she was killed, to discuss increasing the medication dosage.

Kate and Marlena tell Allie about Lucas being hypnotized and Marlena reveals he saw Sarah at the manse.

Paulina has big plans for Abe’s future in politics.

Kristen has a lucky run-in with Evan.

Chloe tries hard to get Shawn to give Belle another chance.

Allie happens upon Johnny making out with Chanel and isn’t too happy.

Shawn gets some shocking news.

Jada interrogates a new suspect about that night Abby died.