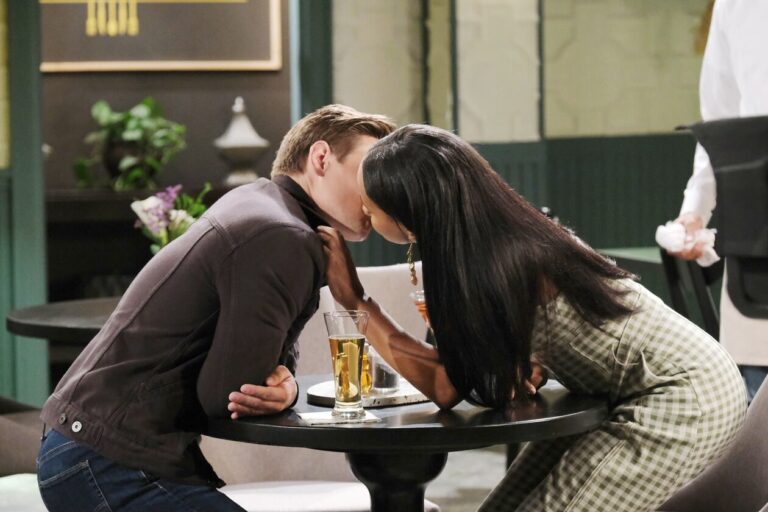 Allie is stunned to learn Chanel is dating Johnny.
Calista threatens to expose Bonnie.
Chad confides in Jack his fears that his marriage to Abigail is over.
Xander plays hardball with EJ.
Gwen says what might be a final goodbye to Xander.

Allie loses her cool over Johnny and Chanel’s relationship.
Chloe and Brady are forced to share close quarters.
Belle tries to talk Philip off the ledge.
Ben and Ciara inform Shawn of their honeymoon plans. They’re off to New Orleans.

John gets recruited for a top-secret mission when Shaney Donovan calls.
Anna informs Roman that Carrie’s marriage is in trouble and asks for his help in saving their marriage.
Paulina’s breakfast plans with Lani, Eli and Abe go awry.
Chad has a tense encounter with Gabi and Jake.

Calista (Cady Huffman) pressures Bonnie to commit a crime.
EJ reaches out to Nicole and she balks at his request.
Gwen comes clean with Jack and defends Xander.
Ben and Ciara enjoy their honeymoon.
Justin questions Calista.

Beyond Salem, the Days of our Lives spinoff starts Monday, September 6.

Allie decides to commit to Tripp, though she feels jealous about Johnny dating Chanel.
Johnny attempts to woo Chanel to show her that he’s not a player.
Johnny and EJ butt heads when Johnny decides to make a movie.
Julie’s concerned when Doug shows signs of mental decline.
Philip and Chloe’s connection continues to blossom while his jealousy of Brady threatens to derail their happiness.
Paulina feels guilt settling in and fights the urge to reveal she’s Lani’s mother, especially when Abe proposes marriage.
Nicole turns away from Rafe and turns her attention to EJ, who is more than willing to help her forget all about the cop.
Philip teams up with Ava as his suspicions grow over Jake and Gabi, who proceed with the plan to take over Titan.
Xander and Gwen’s dynamic is explored.
Chad convinces Abby to return home, but their marriage is far from being secure, especially when Johnny asks Abigail to star in his movie.
There is a huge storyline coming up with John and Marlena, and they will face a threat to their relationship.
Ben has major reservations when Ciara suggests having a baby. This discussion leads them to a bigger story.