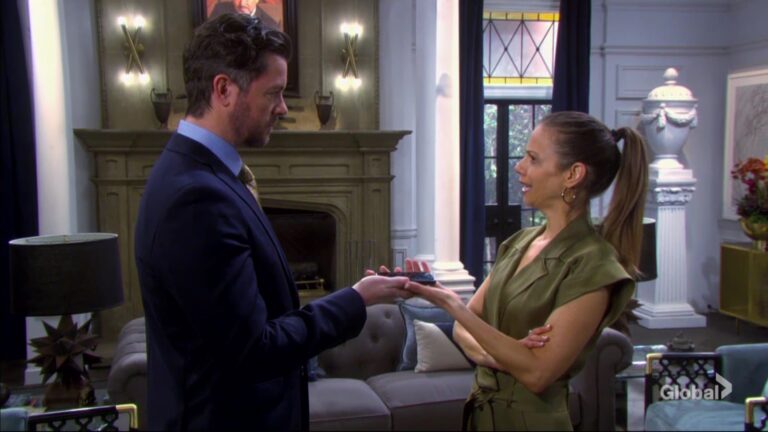 Then check below for what’s coming up the week after!

This includes EJ getting more threatening than usual, Chad paying the secret room a visit, Leo trying to fend off Rafe’s questions, and Steve losing it.

EJ, Ava, and Johnny share a surprising and eventful meal together.

Gabi makes a confession about Stefan to Li.

Alex has a ‘date’ with Allie and Chanel.

Anna is suspicious of Kristen.

Kate is stunned by Lucas’s news.

Paulina goes to Roman and pressures him to forgive Kate for her transgressions.

Alex makes a scandalous suggestion to Allie and Chanel during their date.

Li pitches Kristen an idea that he says will benefit them both.

Kristen is angry that Li is keeping Stefan from waking up now.

Li wants more time to get Gabi to fall for him before Stefan awakens.

Lucas gets three years in prison for kidnapping.

Brady and Chloe have sex and profess their love.

Searching for evidence, Chad and Jada head for the DiMera secret room.

Jada wonders why the DiMera’s don’t close up the secret room. He tells her, “Where would we store our wine?”

Shawn attempts to coax a confession out of Leo.

Leo refuses to confess to anything.

Leo thinks Nancy’s trying to take revenge on him.

Jack asks Gwen how to explain how Leo is innocent.

Gwen has no idea.

Jack asks outright if Gwen knows anything that could lead to them finding out Leo did kill Abigail.

Alex continues his deception to Sonny.

Steve loses it when Kayla gets a gift from Orpheus.

Leo and Sloan, his lawyer, fend off Rafe’s questions.

Leo tells Sloan where to find the proof that he didn’t kill Abigail.

Rafe and Sloan know one another and there’s no love lost.

Chad reveals to Kayla that he’s homicidal and wants to kill Leo.

Kayla has some much-needed advice for Chad.

Ava’s buttons are pushed by EJ.

Gwen turns up at DiMera to see Ava. They discuss Abigail’s death.

EJ hears that Ava busted Gwen out of prison the night Abby died.

Gwen admits she cared for Abigail.

EJ threatens to expose Ava’s secret if she doesn’t give him what he desires. Her shares.

Ava tells EJ that if she were going to give her shares away, it’d be to Kristen, not him.

Chloe turns to Gabi for help dealing with Kristen.

Johnny has an apology to Gabi.

Kristen eavesdrops on Brady and Marlena and shows herself to Rachel, who embraces her.