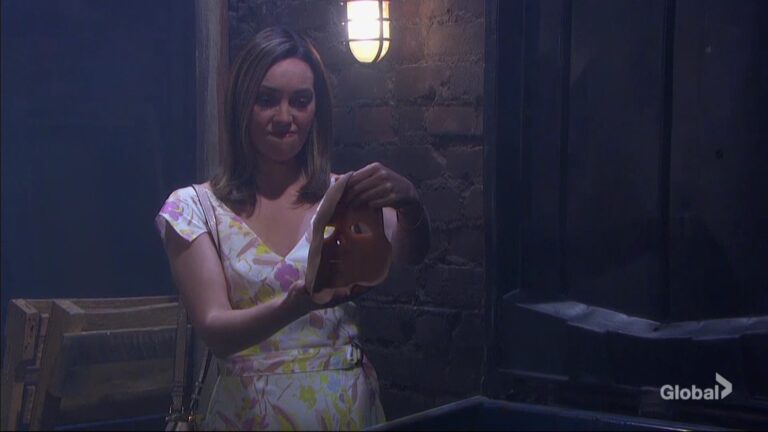 This includes Johnny getting manipulative, EJ trying to outwit someone, and Orpheus raising some eyebrows.

SoapsSpoilers has the Days of our Lives spoilers the next two weeks. First, take a look at the Days August 1-5 spoilers. Then check below for what’s coming up the week after!

Starting Sept. 12, Peacock will become the exclusive home of the fan-favorite drama Days of Our Lives.

For the first time ever, all new episodes of the 58-time Emmy Award-winning drama will debut on Peacock daily with the show’s robust library already available to stream for Peacock Premium subscribers.

The historic move to Peacock creates the ultimate destination for daytime fans to access the library, new episodes and Peacock Original Days of Our Lives: Beyond Salem in one place.

Also beginning Sept. 12, in the timeslots previously occupied by Days of Our Lives, NBC News Daily will debut across NBC stations.

“This programming shift benefits both Peacock and NBC and is reflective of our broader strategy to utilize our portfolio to maximize reach and strengthen engagement with viewers,” said Mark Lazarus, Chairman, NBCUniversal Television and Streaming.

“With a large percentage of the Days of Our Lives audience already watching digitally, this move enables us to build the show’s loyal fanbase on streaming while simultaneously bolstering the network daytime offering with an urgent, live programming opportunity for partners and consumers.”

NBC owned stations will announce their specific daytime schedule soon. Days will only be available on the premium or paid tier of Peacock for Americans and at the time of this post, we don’t have definitive word on how Canadians or Australians will watch.

Marlena is surprised by what Orpheus wants her to do.

Orpheus wants Marlena to give his son, Evan, therapy.

Gwen and Leo chat in the square.

Chad asks Sarah what she recalls about the day Abby died. Did she hallucinate and kill Abigail?

Sarah talks about attacking and threatening Nicole and Chanel, thinking they were Kristen.

Sarah admits it’s possible she hallucinated that Abby was Kristen and killed her.

Evan and Shawn anxiously wait to learn the results of the paternity test.

Steve has a warning for John — they need to take drastic measures this time against Orpheus. To kill him.

Kristen watches anxiously as Rolf tries to work his magic.

Rolf and Kristen aren’t sure Jake’s body is up to bringing him back to life.

Gabi reminds Ava that she’s got nothing, and nowhere to live, unless she does things her way.

Marlena helps give Sarah answers about the night of Abigail’s murder, under hypnosis.

Sarah recalls Rex appearing on her doorstep the night Abigail was murdered.

Rex confirms he was at Sarah’s and she wasn’t hallucinating. She is cleared.

EJ goes to Ava about her so-called marriage to Jake.

Lucas is cleared from killing Abby.

Evan has an encounter that leaves him shocked and shaken.

EJ calls Ava’s bluff and tries to out play her, but it doesn’t work.

Kristen is shocked when Dr. Rolf reveals his secret project to her. He has Stefan’s body.

Shawn tells Belle that Shawn Christian isn’t his son. She’s sorry. He wants to fight, but she reminds him he’s not the bio father.

Evan tells Orpheus that the kid is his and he’s leaving Salem. He’ll earn some cash and then go to New Zealand to be with David and Zoe.

Stefan has an arc reactor and is going to come back to life. Brandon Barash ‘return’s but as Stefan, since Jake can’t be brought back to life. Ever.

He wants to get to know his kids. He doesn’t want to be hunted down by Shawn or Jan Spears.

Gabi barks at Brenda while she commits a felony, while going to city hall to file the paperwork for Ava and Jake’s fake marriage.

Li asks if Ava roped Gabi in to a scheme to get Jake’s shares and she tells him it wasn’t Ava, but her who roped Ava in!

Sarah and Xander theories about who might have killed Abby.

Eric is asked out by Jada.

Chad gets drunk at Brady’s Pub and Eric stops serving him.

As Chad spirals, Sonny comes to his aid.

Gwen tells Jack the pardon wasn’t her idea, though she is happy about it, she didn’t scheme.

Jada throws her weight around at Xander.

Jack asks if Gwen really wants to atone for what she did. She does.

Maggie gets an eyeful at the mansion and sees more than she ever wanted to.

Victor calls Alex immoral and Maggie reminds Victor of who he is.

Leo grills Gwen for some answers.

Gwen tosses the Gwen mask in the trash.

Xander and Sarah search for clues to find out who killed Abby.

Johnny manipulates Paulina into helping him out.

Paulina thinks Johnny and Chanel are over.

Chanel asks Allie to hear Lucas out when he visits.