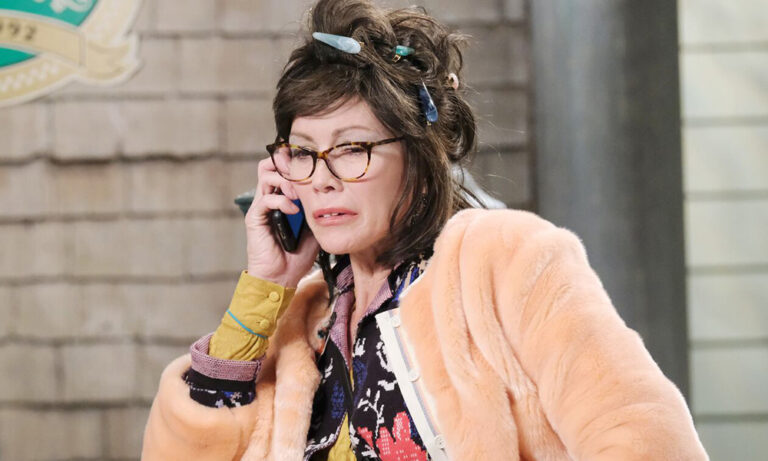 Monday, March 29, 2020: On today’s full episode recap of Days of our Lives, Philip and Xander get into it, Susan wants out of prison, and Chloe feels bad for Xander.

In the square, Gabi can’t let go of wanting the old Gabi Chic building. Philip tells her to let it go. They’ll find a better space. She gets excited when he tells her he wants to expand to Chicago. They have a lot to discuss so he asks her to dinner. She’s not sure what he has in mind because she’s still getting over someone. He tells her it’s just business. She agrees to it.

On a call from the pub, Roman is shocked that Sami plans to recant her confession. Kate explains what Lucas told her and Rafe will fix it. Roman says the DA won’t go for that. Trask will want to know how Sami gained access to Kate’s gun. Roman sighs. Why is he always the last to know about everything? Kate reminds him he knew Rex was in town first. Kate rubs her neck with an ice pack and Roman says he has to go. Xander wanders in drunk and red-eyed. He’s there to get Sarah back. Roman explains that Rex and Sarah left Salem together. Xander asks for scotch and pulls out his own, empty bottle from a brown paper bag. Roman refuses service and Xandy sneers, calling him a real gift. Xander wants to go behind the bar and get it on his own but Roman refuses and points at Xander’s chest. “Go,” he says. Philip and Gabi walk in and Philip grabs Xander. “What are you doing?” Gabi tells him to watch it. Philip’s a decorated Marine. Xander rolls his eyes. “Decorate this!” he punches Philip and Philip goes down! Philip gets up and Xander takes off. Since Roman is closing, Gabi invites him to the mansion for dinner.

At Basic Black, Chloe and Brady are surprised that Sarah actually went off with Rex instead of marrying Xander. Chloe admits she feels sorry for Xander. Brady wonders how that’s possible, calling him a thug who only thinks of himself. Chloe says he’s changed and he loves Sarah. Brady sneers. Chloe knows what it’s like to have her heartbroken. She wouldn’t want that for her worst enemy. She flashes to talking to “Susan” about wanting to be with Brady and says, “Brady, there’s something I need to tell you.” Brady’s phone beeps. He says Statesville just opened and he has to go see Kristen. He’s got two hours to get there and back. He hasn’t seen her since he was shot. Brady invites her to dinner tonight. Susan’s not there tonight so Chloe agrees.

Kristen in her Susan disguise wheels and empty steamer trunk into Marlena’s townhouse, muttering, “Enjoy your life in paradise, my dear.” Marlena appears. “Oh my stars and garters, Marlena Evans how are you doing?” Marlena’s fine and asks where she’s been. Kristen flashes to kidnapping Sarah and sending her off to some island. “Susan” talks about going somewhere overnight and thinking she needed to overpack when it turned out she only needed her robe. John’s making beef stew and assumes there’s enough for four. “Susan” is glad to hear Brady’s dining with them.  Marlena goes to tell John Susan’s back, while Kristen takes Susan’s call from prison. It has been a month today, and Susan wants to know when Kristen’s coming to the prison to “do the switcherooni.” She’s done with prison. Vivian’s following her around wherever she goes. “Maybe she wants to be your friend,” Kristen says. Susan tells her that Roger’s tour is about to end. Kristen lies that his tour has been extended. “There was a message on Marlena’s phone.” Susan calls her a liar.”It’s not a leap year,” Kristen says. Susan says she’s tired of this and her lies. Kristen needs more time. Chloe admitted she wants Brady. Susan’s shocked that she was right all along. Kristen worries if she leaves now, Chloe will move in on him. When she hears Marlena walk in, she uses the Susan voice to get Susan off the phone. They discuss the reason why Susan’s not anxious to get home to Roger. “Susan” explains she doesn’t like touring on the stinky bus. This is where she belongs. “I see,” Marlena says. She goes to see a patient and Chloe arrives. She’s there for dinner and says Brady went to see Kristen in the prison. “Susan” looks upset.

Jake interrupts Kate in her room at the mansion. “I have a villain of a headache,” she says. Jake was worried when her assistant said she took the day off. Kate calls it a tension headache. Her son reconciled with his ex-wife, Sami confessed to murder and her gun is the one that was involved in the murder. Jake’s confused too. He says, “Rex is a doctor and Xander is, ” Kate finishes, “A baboon.” Something doesn’t feel right about it and Kate can’t put her finger on it. Jake doesn’t know Xander well but heard he has changed. Kate doubts that and now that she’s out of the picture, he’ll revert to his old self. Kate feels comforted by Jake and things turn romantic. He realizes she’s over her jealousy and she tosses away her icepack, hoping for sex. After they make love, Jake’s hungry. Kate wants more sex and they go at it again.

At Statesville, Susan looks at her handmade license plate that reads, “The King.” She can’t wait to give it to Roger. “I need to get out of here.”

Xander lets himself into his room at Salem Inn. He’s so drunk, he hallucinates Sarah in his bed in her wedding dress. She tells him she made a terrible mistake and is sorry for hurting him. She doesn’t want Rex. She only wants him. “I only want you,” Xander says. She wants to marry him. She tells him to put on his kilt and when he takes it and tries to get it on, he almost falls off the bed. He looks back and Sarah’s gone. He starts yelling.

Gabi and Philip arrive at the mansion. Gabi explains she owns the place and doesn’t want to live with Ava Vitali. Philip doesn’t blame her. Gabi notices blood on Philip’s shirt and she tells him to take it off. He’s reluctant but does it. Later, Gabi and Kate appear and see Philip in a tank top and Gabi leaning over him. They don’t look happy.

Susan rants in her own voice about Kristen not being the boss of her when Brady arrives and asks, “Kristen?”