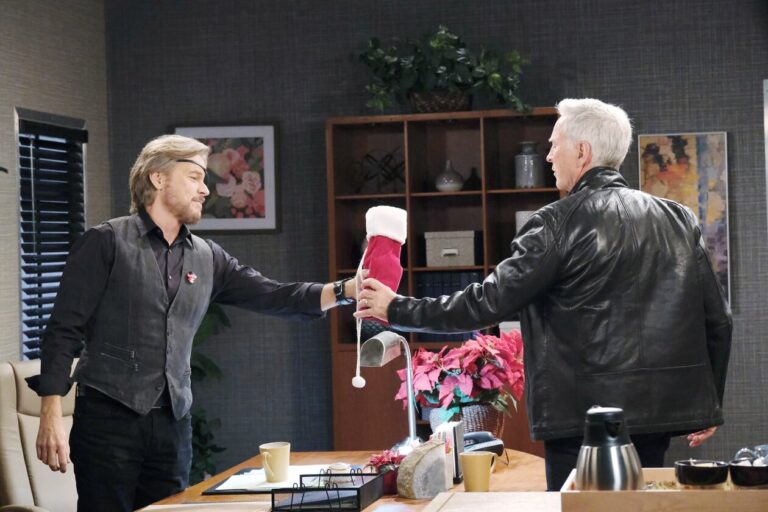 On today’s full episode recap of Days of our Lives, Steve and John team up, Charlie tries to get rid of his unwanted visitor, and Will spends time with his grandma.

Steve and John have a drink to old friends in Kayla’s office at the hospital. It means a lot to Steve that John’s there. John admits he wasn’t going to show up at first. Marlena reminded him they can’t throw away their long friendship. John can’t understand Steve standing by a lie. “It’s not who you are,” he says. They can’t move on unless Steve admits the proof shows Tripp raped Allie. Steve can’t admit to that. He may have evidence that Tripp’s innocent. John doesn’t see how that’s possible. Steve explains it is “If the real rapist is related to Tripp.” John finds this far-fetched. “Maybe you better go easy on that scotch,” John says. The odds are too great. Steve says the odds are always stacked against them. John finally agrees to look into it. As they talk, Steve gets an inkling as to who the real rapist is.

At home, Tripp prepares some flyers with Ava’s photo on them, to distribute around Salem.

Charlie freaks out when he hears Claire banging on his door. She doesn’t hear Ava’s cries as she begs Charlie to let her in to give him some TLC. Charlie tries to get rid of her. He locks Ava into his room and cleans up before putting on his fake glasses and opening the door. Claire loves his place and reveals she found out his address through Titan. She notices he’s sweating. He’s got a fever, he says. Claire makes a huge deal about him getting sick so suddenly and Charlie recalls that Allie found him familiar. Claire’s glad he wasn’t blowing her off. Charlie would never do that. She admits she opened his gift and loves it. She gives him hers. It’s a shirt. At Claire’s insistence, he takes off his shirt and shows his buff body. Claire’s not immune. She touches him and he throws on the shirt, not wanting her to see his ‘messy’ room. Claire wants to give him one more gift and alludes that it’s sexual in nature. Charlie wants that too, but he can’t risk getting her sick. From his room, Ava kicks a trash can, prompting Claire to become startled. Charlie says the pipes are loud, but Claire notices how antsy he seems. Charlie claims he’s just sick. Once Claire’s gone, Charlie rants at Ava for making noise.

Lucas visits Marlena and Allie at the townhouse. Lucas admits he went to see Tripp and things got out of hand. Allie and Marlena are upset and then Lucas accidentally spills that Allie pulled a gun on Tripp. Marlena had no idea. Lucas thinks Allie was emulating what Sami did to Alan, years ago. Lucas is proud of Allie for taking matters into her own hands. Marlena’s not happy about that. Lucas disagrees. Marlena urges him to be constructive, not destructive about it. Lucas knows she’s right. Allie tells her dad about the civil suit she’s filing that Belle is helping her with. Lucas is glad to hear. He holds the baby and says he’ll miss him. He has to go on a little business trip.

Will and Kate have cocoa at the square, while they talk about Allie and Henry. Will wants to stop focusing on the rape, but Kate has a hard time not thinking about it, especially with Tripp running around free. Kate considers telling Tripp off, but she’s worried that if she got that close to him, she’d rip him to shreds. Suddenly, Tripp walks up. Kate jumps up and calls Tripp a “piece of filth.” Tripp denies raping her. If he had, he’d admit it and own up to being “that kid’s” father. Will asks him to stay away from his family. Kate yells at him to get out of Salem. They leave Tripp looking as though he’s going to cry.

Tripp returns home and wonders again where his mother is. He leaves her a message and Steve drops by, certain that Ava can take care of herself. Tripp shows his dad the note she wrote about plans to spend the holiday with him. Tripp fills his dad in on his run-ins with Kate and with Lucas. Tripp considers leaving town when he finds his mother. “Everyone hates her too, so it makes sense,” he says. Steve says he and John will clear Tripp’s name. Steve reveals how and that they have a real suspect who is a relative of Tripp’s.

In the next full episode of Days of our Lives, Chloe and Brady go on a date.