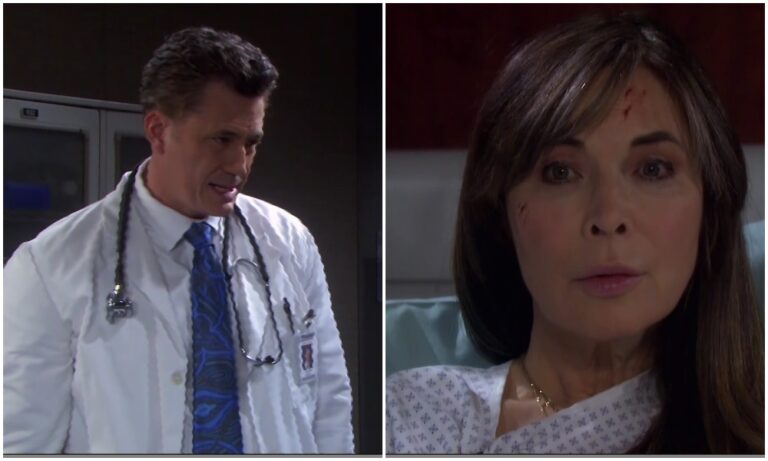 In the Friday, May 28, 2020, full episode recap of Days of our Lives, Sami tells Nicole she knows her secret, Kate tries lying to the doctor, and Gwen meets Xander.

At Alice’s, Gwen makes Jack bangers and mash for breakfast. As he enjoys it, she says it was her mother’s go-to meal for a hangover. But they usually had enough money only for mash. Jack feels bad but Gwen says not to. She just wanted to share a little of her life with him. They’re glad to get to know each other. Snyder arrives and gripes at Gwen, asking if she got it done yet. Jack appears and doesn’t like the way Snyder’s treating his kid. Snyder thought she was alone. He reminds her to take her medication as directed. Jack’s stumped that he’d come all the way over to tell her that. Snyder claims his patients mean a lot. Jack goes to dress and once he’s gone, Gwen shoves the drugs in his hands and tells him she isn’t going to be his drug mule. Snyder reminds her of his blackmail and Gwen says she’ll take him with her if she goes down. Snyder doubts that she’d give up her position as the daughter of a pillar of the community. He tells her to do the drop today.

In the hospital, Lucas asks a blind Kate if she’d like help eating. He gives her the fork and she eats a blueberry. He hopes she gets her sight back. She thanks him for being there for her and for putting up with her. “Stop. It’s my pleasure. I’m your son. What are sons for?” She asks why Jake’s not there. Gabi finds Jake sitting in the waiting room. She tried texting but his phone died. She says she was helping Chad with Thomas and Charlotte. She says he was in bad shape last night about Kate. Jake tells Gabi that Kate had to be given a sedative last night, she was so distraught. He didn’t want to leave her alone in that state. He stayed the night. Gabi warns that Kate would use her blindness to draw him in. Jake says it won’t happen. He’s with Gabi now. She needed to hear that. Gabi learns that Kate doesn’t recall anything beyond packing for their vacation. She doesn’t remember walking in on them in bed. Lucas appears and tells them that Kate’s not doing well. Allie appears.

Related: James Read’s back as Clyde

At the townhouse, Sami tells Allie that Kate will pull through. She rocks the baby and when Allie asks, she insists she is fine, but not a fan of enclosed spaces. Allie doesn’t get how she and Dad were in there together that whole time. “You must have really gone at it.” Sami flashes to making out with Lucas and says they sure did. Allie lets her know that Eric’s extending his stay in the Congo by three months. Sami’s upset and Allie reveals that Nicole went out and got wasted when she heard. Sami recalls seeing her with Xander at Salem Inn. Sami tells Allie she saw Nicole that night. Allie says Nic got a room at Salem Inn that night. Sami fishes to find out if she was alone and instead learns that Nicole forgot her wedding ring behind by accident and was fraught with worry. Sami offers to bring Henry back to Nicole’s as Allie takes off. Sami calls Nicole a “lying slut.”

Nicole reads the news from home about Kristen’s disappearance. Xander shows up with a gym bag. He has nowhere to go. He lays on her sofa. “I’m moving in!” He asks for breakfast and she tells him he can starve to death. She reveals Brady won’t let her hire him. He’ll never help Xander. Xander threatens to tell Sami about spending the night in his bed. “I’d like to be a fly on the wall of Eric’s hut when he finds out his wife went on safari at Xander’s Wild Animal Kingdom.” Nicole calls him a disgusting pig and he reminds her that she climbed all over him. Nicole seethes. She hates him. He knows. He says he’ll find somewhere else to stay so he doesn’t tempt her to break her marital vows again. He goes and gives her one last threat. She calls and leaves Brady a message. Sami turns up with the kid. She explains Allie’s visiting Kate. They make nice, and Nic puts the baby to bed. Sami assumes it’s been hard on Nicole being away from Eric for 8 months. Nicole asks what’s really going on. “We don’t need to get caught up. Cause I already caught you. I know what you did,” she whispers. She knows Nic was at Salem Inn with Xander. Nicole shrugs it off. He helped her book a room. Sami doubts that. She thinks Nicole slept with Xandy.

Rafe brings Ava coffee in bed. He worked late last night trying to find Kristen, Jan, Claire and Chloe. Ava wishes she could help. He asks her to tell him what she saw when she went into the interrogation room. She tells him her same story, leaving out seeing Kristen there. Rafe asks again if she had an interaction with Kristen. She denies it and he interrogates her since there was a fifteen-minute window where Kristen took off and Ava was there at SPD. Ava lies that she was in Rafe’s office, waiting for him. She gets defensive and Rafe reminds her Kristen saved her life. “Maybe she said you owe her and asked you to help her escape.” Ava lies some more. Rafe believes it. He tells her that everyone else is lying to him. He tells her Nicole was talking with Brady about a job for Xander. Ava recalls Nicole’s admission of cheating. Ava likes Rafe looking out for her. She kisses Rafe passionately. The clothes start coming off and Ava kisses down Rafe’s chest.

Back at the hospital, Snyder introduces himself to Jake, Gabi, Allie and Lucas as Kate’s doctor and goes off to see Kate while Gabi asks if Jake will tell Kate about the. In Kate’s room, Snyder examines Kate and learns she’s not blind. Unless it’s hysterical blindness. Kate becomes upset and asks him to try walking in on Jake in bed with “a bitch named Gabi.”

Back at Alice’s, Gwen is ready to deliver the drugs when Xander appears. He realizes she’s the one who blew up Jack’s life. She tells him they’re all trying to move past it. He calls Jack “a good egg” but he’s not sure about her. He warns her against hurting Jack or she’ll answer to him. Gwen won’t do that. She wants to make him proud and will do what it takes. She takes off and Jack appears. He’s been eavesdropping. Xandy smells bangers and mash and wanders inside. He eats the rest of Jack’s breakfast and asks to stay there a while. Jack only has the sofa available and Xander’s okay with that.