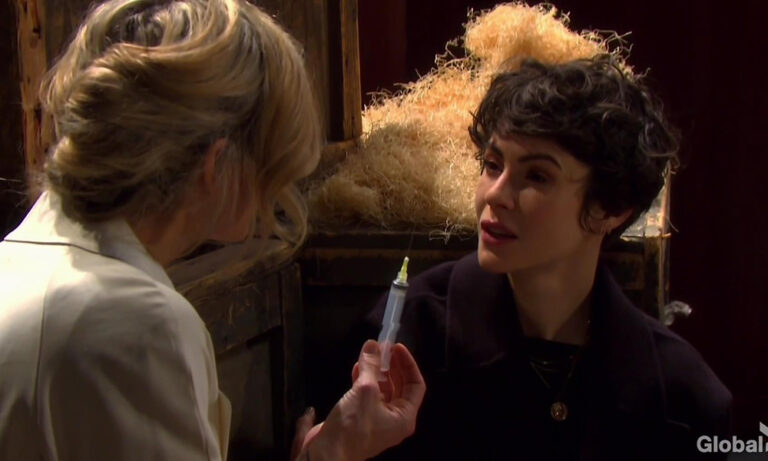 Monday, March 22, 2020: On today’s full episode recap of Days of our Lives, Rafe grills Allie about Kate’s gun, Xander recounts what happened between him and Sarah to Jack, and Sarah is in more trouble than she bargained for.

Rafe asks Allie to SPD to tell her that the ballistics report on Charlie’s murder came in. The gun used to kill him belonged to Kate and that Kate says the gun was stolen. Does Allie know anything about that? Allie doesn’t respond and Rafe starts to badger her. He asks if she killed Charlie and she recalls stealing Kate’s gun. Sami appears and tells Rafe he’s done railroading her daughter. She lets Allie leave and recalls telling Lucas that she didn’t kill Charlie but that she thinks Allie did. Rafe tells Sami that Kate’s gun was used to murder Charlie. Sami says that’s great. He should drag Kate down there by her hair. Rafe shakes his head, no. This shows him Sami’s been doing all she can to protect her daughter. Sami asks why this matters. Rafe admits Allie stole the gun before and used it to threaten Tripp. If Allie goes to trial, it’ll come out in court. Sami freaks out. That can’t happen. She tells Rafe she killed Charlie.

At Brady’s pub, Roman and Kate learn that Rex is leaving town again and with Sarah Horton. She’s not impressed but if this is what he wants… Both Roman and Kate remind him that Sarah was going to marry Xander until Rex got to town. Xander won’t let this go. He’ll go after Rex. Rex explains that it already happened. He lets them know that he found them in bed together. Roman smirks. “Doesn’t anyone lock their doors anymore?” Rex goes up to pack and Kate tells Roman that the cops identified her gun as the one used to kill Charlie Dale. She tells him her gun was stolen and she thinks Allie killed him and that Sami’s covering it up. Roman is shocked but Kate knows that when it comes to her kids, nothing is off the table for Sami. Rex returns with his bag. His parents wish he could stay but Sarah wants to leave as soon as possible.

Kristen walks into the wine cellar and sees that Sarah’s free. Sarah comes after her with the syringe filled with Dr. Rolf’s serum and the women struggle. Sarah’s injected. Kristen asks what was in there. Sarah has no idea. She becomes dizzy and Kristen helps her to the floor and holds her, glad she’s still alive. Sarah thinks Kristen’s Xander and is happy he found her. Kristen looks concerned. When she realizes that Sarah’s hallucinating, she pretends she’s Xander. Sarah says he looks so handsome. Kristen tells her they’ll go away to an island and marry on the beach. Kristen says they need their luggage. She pulls in a large trunk and tells Sarah to get inside. They need to hide her from Kristen. Sarah does it.

At the Kiriakis mansion, Jack’s in shock that Sarah would cheat on him with Rex and leave him. “Stranger things have happened. People have come back from the dead. We’ve had demonic possession…” Xander drinks whiskey and says he’s a loser and should have expected it. Jack denies that. Xandy tells his friend the whole story. He says putting on the dress made Sarah think about how he hid the truth about Mackenzie and that she could never trust him again. Jack is confused that she figured that out on the day she was supposed to marry him? MaybeRex guilted her into giving him another chance? Xandy says that’s not it. Sarah was clear that she made the move. Not Rex. Jack still has issues wrapping his head around this. The timing is too perfect. Something doesn’t add up. Xander defends Sarah. He thinks she’s following her heart, not trying to be cruel.

Lucas finds Tripp at Nicole’s, babysitting Henry. Lucas needs to talk to Nicole. He sends Tripp home and when Allie arrives, Lucas asks if she stole his mother’s gun. She reluctantly admits it. She recalls being the one who Charlie said, “Don’t shoot,” to when he opened his door. When she couldn’t shoot him, Charlie taunted her. He was glad she couldn’t shoot him because she’s the mother of his child. He took the gun from her and she cried and ran away. If Sami didn’t kill Charlie then someone else came afterward. Shown is Tripp banging on Charlie’s door.

At Salem Inn, Xander finds a gift from Sarah. It’s the sporran she bought for his kilt. He tosses the card which says she can’t wait to see him in his kilt. “Damn Sarah, how could you do this to me?” He puts her engagement ring inside.

“Sarah” meets Rex outside of Brady’s pub. He tries to help her with the trunk and she flinches. She tells him she isn’t ready for a commitment. She apologizes and tells him not to come to find her. She leaves him bewildered.