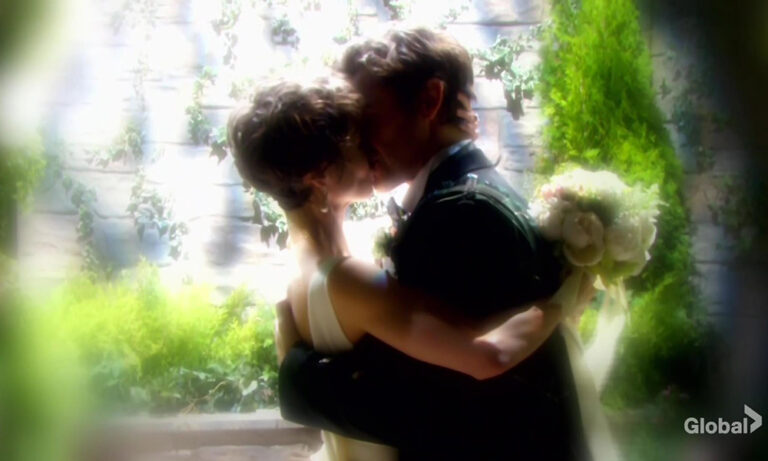 Friday, March 19, 2020: On today’s full episode recap of Days of our Lives, Jake wants to move out of the mansion when Gabi moves in, Sarah finds the syringe full of Rolf’s serum, and Xander is heartbroken.

Jake walks in on Gabi putting her clothes away in her old room at the DiMera mansion. He asks why she’s there. She jokes that she wanted to be closer to lure him into her bed. His eyes widen. She smirks and admits she couldn’t live with the Mafioso Princess anymore at her brother’s place. She reminds Jake she owns the mansion and then says she’s moved on from him with someone else. She tells him to leave her room because she’s ready to take a bath. Jake isn’t ready to go so she takes off her dressing gown and he gawps just as Kate walks into the door. Jake has a meltdown and throws Gabi’s robe at her. She covers up and Jake says this isn’t what it looks like. Gabi explains as she taunts Kate. Gabs goes to bathe and Jake asks Kate to move out of there with him. They kiss and profess how much they love each other. Kate realizes she wants to stay in the house. If they go, it’ll seem like Gabi’s a threat to their relationship. Jake says, “Cause she’s not.” They kiss.

Downstairs, Chad learns that Abigail just got home from being grilled by Rafe at SPD. She says she denied kidnapping Gwen and poking her with the syringe. Chad’s shocked she lied but Abigail shrugs. What was she going to do? Let Gwen get away with taking more from her family? Chad says her obsession with revenge could take more from their family. Chad says her anger is turning her into someone he doesn’t recognize. He’s afraid for their children. Abigail hopes he doesn’t mean that. He doesn’t but he’s afraid she’ll go to prison and he’ll lose her again. She thinks he’s making her out to be the bad guy when Gwen’s the one. Chad thinks she needs to talk to someone about her anger. Abby says she had one, “Until Gwen killed her.” Chad says they don’t know that. Abigail snaps that this reminds her of him never believing anything else she said in the past. She doesn’t know how to get over all of the pain Gwen has caused. Chad says she’s better than this and they cry while he pulls her into his arms. Chad’s glad she’s agreed to get help. He thinks they have something Gwen doesn’t. “The power of love.” They profess their love. Chad will reschedule their couples therapy.

At the mansion, Jack and Bonnie wonder what’s going on with the wedding since Xander and Sarah are still missing. Gwen wanders in and they’re surprised to see her. Bonnie goes to check on Xander while Gwen tells Jack that Abigail kidnapped her. Jack’s shocked upon hearing her story. “That’s impossible!” Gwen convinces him of the truth and he defends Abby. Since Gwen’s not hallucinating, she didn’t give her the drug. Gwen says the only reason why is because Gabi stopped her. Jack’s sorry. Gwen thinks she should cut Abby out of her life. Jack first needs to give Abby the chance to end the vengeance. He hugs Gwen.

Sarah gets herself free and pounds on the wine cellar door, screaming for help. She needs to get out of there before Kristen breaks Xander’s heart. She finds a crowbar and starts reefing on the door and yelling, “DiMeras! DiMeras! Doesn’t anyone need a bottle of wine?” She fantasizes that Xander has come for her and that they kiss and say loving words to one another. Sarah finds the syringe that Abigail left behind and smirks.

Kristen in the Sarah mask kisses Rex in his bedroom above the pub. He gets the wedding dress off and she takes off his shirt and pants. They make out and land on the sofa. Xander rushes inside. “What the hell is going on?” He grabs Rex and pulls him off her. Rex tells Xander she’s there by choice.  Xander argues, “She loves me, we’re getting married.” Kristen as Sarah says Rex is right. “Sorry, Xander.” “Sarah” asks how he found them and he tells her Susan told him. “Sarah” asks for time alone with Xandy and once he’s dressed, he leaves. Xander says he’ll never believe she would sleep with Rex Brady on their wedding day. Xander thinks Rex forced himself on her. “Sarah” says she’s sorry. She asked Rex to bring her there. “I’ve never really gotten over him.” That’s why she came when he called her today. Xander’s confused. Then where has she been all night? She covers and says she was walking and putting on the dress reminded her of all of his lies. Xander says they’ve moved on from that. They’re through. He looks at the gown on the floor and asks if she felt this way, why did she have on her wedding dress. “Sarah” didn’t want to break her mother’s heart. Xander’s puzzled. He doesn’t believe her. “Sarah” says, “Do you believe in signs, cause I do.” She was struggling with whether she should walk down the aisle and Rex called. She tells Xander she’s in love with Rex. “We’re done.” Xander pulls her into a passionate kiss. She pushes him away and starts yelling about what he did to her and Kristen. When he says, “Who bloody cares about Kristen DiMera,” Kristen gets angry and says Kristen’s not a monster, that she has feelings like everyone else. She tells Xander to go. He reluctantly does and Rex returns. She will go pack and tells him she wants to get far away from there. Rex is beside himself with happiness, but when he goes to kiss her, “Sarah” pulls away. Rex text Kate to meet at the pub.

Gabi comes from her bath and sees that Jake has brought her luggage. He’s saving Harold the trip. “What do you got in here, Jimmy Hoffa?” He asks.

Kate arrives at the pub to see Rex. He tells her he’s leaving town. “This is hello and goodbye, sorry.” He tells her about reuniting with Sarah.

Xander arrives to the Kiriakis manse and tells Jack that he found Sarah in bed with Rex.

Once Kristen returns to the wine cellar, Sarah attacks her with the syringe. They struggle.