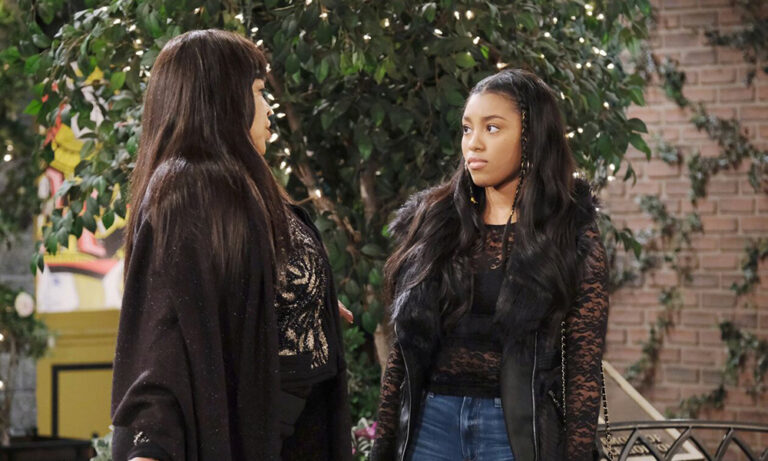 Friday, March 26, 2020: On today’s full episode recap of Days of our Lives, Sami tries to get out of going to prison now that she knows Allie didn’t kill Charlie, Chanel gets a lecture from Paulina, and it’s revealed that Ava visited Charlie the night he was killed.

At the apartment, Allie reveals to Nicole that Sami didn’t kill Charlie. She confessed to protect Allie but admitted she shot Charlie once he was dead. “That is so Sami. Overkill. Literally.” Nicole recalls Ava threatening Charlie’s life and takes off.

At SPD, Sami tells Lucas she had to confess because Allie once stole Kate’s gun to threaten Tripp.  She confessed to protect Allie. She says Henry will grow up with a mother. Lucas explains that Allie didn’t do it. They wonder who did. Lucas calls her confession purgery. “Not really,” she says. Rafe never believed her.

Rafe finds Ava cooking for him, making sauce. She needs to discuss Charlie’s murder. Ava says now that her son is dead, Rafe doesn’t need to protect her anymore. She confesses that she left the mob and has no money. She’ll find a job and as soon as she’s on her feet… Rafe interrupts and tells her she can stay as long as she wants. Gabi just moved out and it’s great having someone here who can cook Puttanesca (sauce). Ava’s thrilled and thanks him and tells him they’ll eat. “Mangia, mangia, [eat, eat]” she says. He gets called away.

At the square, everyone learns Chanel is Paulina’s daughter after Chanel tries to stick Claire and Tripp with the tab for the drinks she drank most of. Chanel denies she offered to pay. Eli tells Chanel to pay the bill but she can’t, “Because of her,” she says, looking at her mama. Her credit cards were all canceled. “What a nightmare,” Claire says sarcastically. Chanel was humiliated when she tried to buy shoes and the sales lady cut up her cards. She couldn’t even buy a plane ticket. She had to drive here. “Okay Little Match Girl, move on,” says Paulina. Paulina is sorry for the drama but tells Claire she’ll pay the bill. Claire and Tripp take off. Chanel is introduced to Eli and she hits on him. When Chanel finds out her mom cut her off without a dime and is paying for the twins to go to college, she has a fit. Later, Chanel and Paulina are in Paulina’s room at Salem Inn. Paulina calls her kid self-absorbed and she loves her but nothing penetrates her thick head sometimes. Paulina failed her by giving her the world. “That’s so low rent, I can’t even believe it,” Paulina says, about her trying to take Tripp and Claire for a ride. Paulina apologizes for not being a good mama. It’ll change. Chanel asks for a budget and Paulina says she’ll get a job. Chanel doesn’t need one. “We’re rich.” Paulina says no, she’s rich.

John finds Abe outside the pub. Abe tells him the christening was a success. He fills him in on the mistake with Paulina thinking she was the godmother instead of Julie and how Paulina gave a blank check to Eli and Lani for the babies to go to college. “She seems determined to put her stamp on Salem,” Abe says. John has to meet her. They laugh.

Tripp and Claire visit Allie. Claire’s sorry for accusing her of killing Charlie. “We saw that your mom confessed.” Allie explains she didn’t kill Charlie. They wonder who did it. Tripp looks from one woman to the next.

Rafe arrives at SPD and Sami reveals she doesn’t know who killed Charlie. Sami was covering for Allie but both Sami and Lucas confess that she didn’t kill him. Allie took the gun from her when she went over there to confront him. “She couldn’t go through with it,” Lucas says. Rafe finds it crazy and asks if that’s why she’s withdrawing her statement. “It seems a little concocted.” Sami’s shocked. Rafe calls Lucas the courier working between Sami and Allie. Lucas gripes that it’s the truth. Rafe says this case is out of his hands now. He has to give it over to DA Melinda Trask. Sami rants that Trask hates her and she should have recused herself when her daughter was in trouble. Sami asks if Rafe believes her. “Yes,” he says. She’s sorry she didn’t trust him. Rafe goes to talk to Trask and returns to tell Sami she’s still facing murder charges.

Nicole visits Ava and they eat pasta as they discuss Charlie’s murder. Nicole admits Sami didn’t kill Charlie. She confessed to protect Allie, who also didn’t kill Charlie. The killer is still out there. “Maybe they’re at home in the kitchen having lunch right now,” Nicole says. Ava’s appalled. What is Nic accusing her of? Nicole says she’s not accusing her but she had it out with Charlie who made threats against Tripp. Nic reminds her she said she brought Charlie into the world and maybe she should be the one to take him out. Ava remembers. “Wasn’t my finest moment.” Nic asks if her friend killed Charlie. Ava recalls going to his apartment and finding the door unlocked. She went inside. Ava tells Nic she didn’t kill him.

Eli and Lani arrive home and talk about Chanel’s flair for drama. Eli realizes it’ll be hard raising their kids on a cop salary but it’s better not to spoil them. Lani calls Chanel, “Entitled, shallow, disrespectful.” What if it’s too late to change her?